Recent curbs on its official import have led to a spurt in the smuggling of gold. We track the subterranean trail of the yellow metal from West Asia to Kerala. He will not reveal his real name. And what this nondescript looking 43-year-old, clad in all white - half sleeved cotton shirt and mundu - says about his occupation is startling. The native of Kasargod district in north Kerala, but now living in Dubai, is a 'facilitator' of gold smuggling into India. In October alone, he was responsible for 20 kg of gold entering the country illegally.

Not surprisingly, he is tight-lipped about his forthcoming consignments, but does reveal that, following a couple of gold carriers having been caught at Kerala airports recently, he has decided to avoid the state altogether. "I prefer airports close to the state but not within it, such as the ones at Coimbatore or Mangalore," he tells Business Today, while on a short visit to Kozhikode in north Kerala.

The Kasargod native's main occupation is that of a hawala agent, but he has had earlier experience of  gold smuggling as well. In 1988/89, when the Gold Control Act - which essentially prohibited gold imports into India - was still in force, he used to be a 'carrier', bringing in gold from Saudi Arabia. One assignment involving 20 gold pieces, each weighing 116 gm, earned him Rs 2,000 per piece; for the next one, involving 30 pieces, he charged double. But once gold imports were legalised - on payment of nominal duty - with the liberalisation of the economy in 1991/92, the gold smuggling infrastructure collapsed, and he shifted to currency smuggling instead.

But now, two decades later, gold smuggling has revived again. It all began when policy makers recognised that one of the main reasons for the country's current account deficit (CAD) touching a record $88.2 billion, or 4.8 per cent of the gross domestic product in 2012/13, was excessive gold imports. With Finance Minister P. Chidambaram committing himself to lowering the CAD to $60 billion in the current financial year, import duty on gold has been progressively raised. It was two per cent till January 2012, it is 10 per cent now. Other curbs on gold imports include an excise hike from seven to nine per cent, and the provision that at least 20 per cent of all imported gold must be used for exports.

Click here to Enlarge
The measures have had their impact, with official gold imports falling from 161.38 tonnes in May this year to just 7.24 tonnes in September. But drastic remedies can have unexpected side effects. As Reserve Bank of India Governor Raghuram Rajan has himself admitted: "One worry is whether gold is being smuggled in sizeable amounts and is being paid for through the hawala channel." He acknowledged gold smuggling had increased, but maintained it was "still small".

As facilitator, the Kasargod native's responsibility is to arrange delivery to Indian agents - find trusted carriers, hand over the consignment, arrange for their air travel to and from India, ensure their safe passage to the extent possible by establishing links with and bribing Customs and airport staff. Facilitators' commissions can vary,  the Kasargod native says he gets10 per cent by weight - usually 250 gm of gold for every 2.5 kg delivered.

Taking delivery from the carriers are the 'landing agents' in India, who then arrange for the gold to reach the retail level. The mafia dons of yesteryear, such as Haji Mastaan or Karim Lala, functioning in the heyday of the Gold Control Act - which began as an executive order in the mid-1960s - were essentially landing agents, handling gold - and much else besides - smuggled in largely by sea. Dawood Ibrahim, too, began as a landing agent.

So how does the operation work today? The facilitator reveals that gold smuggling has links with hawala, the smuggling of currency, which go well beyond his own. Indeed it is hawala money which finances gold smuggling - the smuggler's own investment is minimal, since he borrows from the hawala operator to buy the gold. If the consignment is large, the smuggler/financer seeks out a facilitator, if not he arranges carriers himself. Gold smugglers, mostly Indians themselves, can be found in all the Gulf countries, but most of them work through agents based in Dubai.

Buying gold in Dubai is a perfectly legitimate activity; it is purchased against a receipt. The smuggler reaches an agreement on the price to be paid in India with an agent - the transaction is called 'cutting' - which remains fixed till the date of delivery even if the global price of gold fluctuates. Taking gold out of Dubai is also perfectly legal - the gold, along with the receipt, is handed over to the carrier to be shown to Dubai airport authorities if required. If the consignment is a big one, he even gets a certificate issued by the Dubai police stating the weight of the gold and the name of the person carrying it. In India, after evading Customs, the gold is duly handed over. Only after the gold has been sold does the smuggler receive payment, after which he pays off the facilitator and returns the cash he had borrowed from the hawala operator, keeping his profit. Some hawala operators have also now begun partnering with the gold smugglers.

If a consignment is seized, the entire loss is borne by the smuggler. It is thus essential for him to have deep pockets. "It's an intricate ecosystem in which the role of every player is clearly defined and immense discretion is maintained," says a hawala agent hailing from Kerala's Kannur district, who works out of Jeddah, Saudi Arabia. "The carrier, for instance, knows no one connected with the operation except the person who hands over his air ticket. Sometimes, even the facilitator does not know who the real smuggler is." Such precautions are necessary so that even if a carrier is caught, the network cannot be busted. The Kannur native estimates that there are around 200 mid-level hawala agents in Saudi Arabia and another 500 in Dubai. 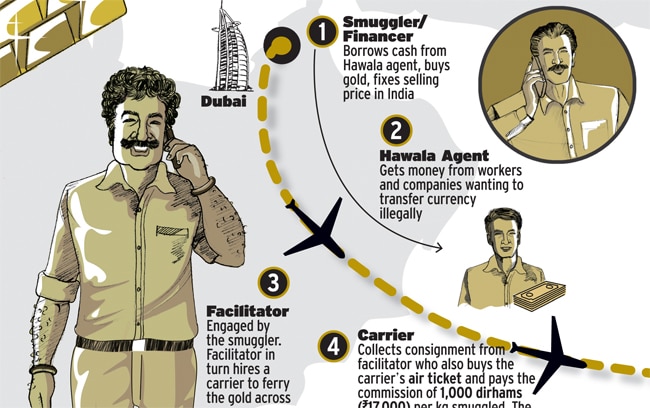 How much do smugglers earn? A hawala agent spelt out the numbers. The price of gold keeps fluctuating but, say, on a given day, the price of a single kilo (of the pure 24-carat variety) is Rs 26.30 lakh. The smuggler, in consultation with his Indian counterpart, would set its 'landing price' in India at around Rs 30 lakh, thus making an overall profit of Rs 3.70 lakh per kg. At a global price of Rs 26.30 lakh, the minimum cost for those buying gold through official channels in India would be over Rs 31 lakh per kg, so there are handsome commissions to be made even at the retailer level. Of course, the smuggler has to foot the carrier's expenses - primarily, the air ticket to India and back, which costs around Rs 30,000 and  pay the carrier's commission of 1,000 dirhams (Rs 17,000) per kg taken across. The net profit is thus about Rs 3.20 lakh on the first kg of gold. If the carrier takes more than a kg, the net profit is higher, since only the commission has to be paid on successive kilos. Insiders reveal that around Rs 200 crore enters India daily through hawala channels from the Gulf, around 70 per cent of which is now used for gold smuggling.

Before import duty was raised and gold smuggling was still minimal, it was mostly labourers returning home from the Gulf countries who were engaged as carriers. But with the spike in smuggling and the rise in profits, the profile of carriers has undergone a change too. As some recent gold seizures indicate, women too are getting into the act; even families with children have functioned as carriers, as well as airline and cargo staff. "A pregnant woman wearing a burqa, or with a child alongside, was not the usual profile of a carrier till recently," says a senior Customs official in Kozhikode. Carriers displaying greater sophistication are also said to command bigger commissions. A new category of 'arrangers' has also arisen - those who provide carriers.

The recent arrests of women carriers, however, have already wrought another change - women are no longer as sought after as before. Facilitators feel such carriers if arrested draw excessive media attention, which is not good for the business. The latest favourite are young men from India, often village residents, who are sent to Dubai on tourist visas. A facilitator from Kerala's Malappuram district, also in the north, says these youth are mostly aged between 18 and 25, and usually school or college dropouts. They are given strict instructions on how to conduct themselves - they are prohibited, for instance, while returning with the gold, from consuming alcohol on the flight.

How is the gold concealed? While small amounts can be carried on the carrier's person or baggage without attracting suspicion, several kilos are a different matter. Police and Customs officials maintain that an entire network of 'concealment agents' - all of them Indians - has sprung up in Dubai, who know ingenious ways of hiding gold inside emergency lights, washing machines, wheelchairs, children's tricycles, TV sets and the like. They charge around 500 dirham for every three kg concealed. There are also workmen - welders, spray painters and so forth - who help out for a price.

Kerala is a key destination of smuggled gold, with towns such as Thrissur, Koduvally and Vengara being hubs. Merchants from here supply gold across the state and indeed throughout the country. Koduvally, for instance, a small town in Kozhikode district, boasts 200 jewellery shops within a 50 metre stretch. Retailers confirm that the Indian appetite for gold remains undimmed - selling is no problem at all.

A mid-sized retailer in Angamaly town points out that those buying through unofficial channels not only save on import duty but also get away without paying one per cent value added tax and additional state taxes. "Both the organised and unorganised sections of gold retailers have come to depend on smuggled supplies," says a wholesale retailer in Kozhikode. "The former get around 30 per cent of its requirements from smugglers, the latter about 50 per cent. Even big stores cannot survive through accounted business alone. They show gold acquired through unofficial channels as 'old gold' or 'scrap purchase' in their books."

And there are no signs of letting up. The estimated demand for gold in 2013 is around 950 tonnes of which only 400 tonnes has come in so far through official channels. How the shortfall is being made up for is fairly clear.

Agents claim they are certain the good times will continue at least till the general elections next year. The import duty will not be lowered, if only to allow the hawala funds to be used in the poll campaign enter the country easily in the form of smuggled gold.

*An earlier picture of a gold market in Kozhikode, Kerala, used with this story was replaced to avoid the impression that jewellery shops shown in it depend on smuggled gold.