Umesh Malhotra surrounded by nursery kids at a Hippocampus centre.

Not much is notable about Channagiri town in Karnataka, apart from a hill fort built in the 17th century and a few locally well-known temples. But the town of 20,000 people is seeing signs of change. In a small but well-lit room of a preschool, a bunch of four-year-old kids are learning simple English words as they point out objects associated with each alphabet on a chart. Nanditha, a sheep rearer's daughter, wearing a bright yellow T-shirt and a dark blue skirt, responds confidently in English to the questions posed. A common enough scene played out across thousands of schools in India, one would presume, except that this is in a backward region of Karnataka, about 265 km northwest of Bangalore. 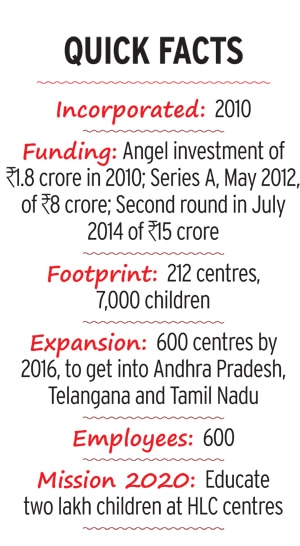 The facilities on offer at this preschool are on a par with the best that most private institutions offer and the teachers seem to be trained and motivated. It is an initiative by Hippocampus Learning Centres (HLC), which runs a chain of such rural preschools, primarily in Karnataka and Maharashtra. What sets HLC apart is that it focuses only on nursery school education (kids between two-and-a-half years and six years) and operates in towns and villages with less than 15,000 people. The man behind HLC is Umesh Malhotra, an alumnus of IIT Madras.

Malhotra worked with tech giant Infosys before starting his entrepreneurial journey. He quit Infosys in 1999 to co-found Bangalore Labs - one of the early IT infrastructure management companies in India - before exiting it. Malhotra says that, after achieving success, he wanted to give back to society. He remembered that, during his work stints in the US, he used to enjoy going to the public libraries with his son. But when he came back to India, he did not find similar world-class facilities. As he was interested in reading and education, he started a library called Hippocampus near his home at Koramangala in Bangalore where kids, especially from poor backgrounds, could play as well as learn with toys, books and music. Hippocampus was named after the part of the brain that helps in storing memory and spatial navigation.

Over the next few years, Malhotra realised that a vast majority of children, especially in rural areas, do not have access to kindergarten education. In most parts of rural India the only school is usually the government-run anganwadi, which functions more as a crèche than a school. The few private schools are expensive and the staff is poorly trained. Malhotra decided to incorporate HLC as a for-profit company that would not only do social good but also be viable. HLC was incorporated in June 2010 with investments from friends and family of about Rs 1.8 crore, and the first preschool was launched nearly a year later.

Instead of rote learning, HLC emphasises hands-on learning of basics in English, Math and the local language, apart from teaching hygiene and environmental awareness gleaned from Montessori methods. HLC charges Rs 200 to Rs 250 per student per month depending on which standard the kid is in. "The teaching quality is really good at Hippocampus," says Mahalakshmi, a house wife whose five-year-old daughter Ramya studies at HLC's Kadalur centre near Mandya. "The fee is also very affordable."

Malhotra says HLC will focus beyond Tier-III cities and towns. "We will not be in A, B, C category of cities but more like D, E, F towns where only ITC and Life Insurance Corporation might have a marginal presence." Setting up each centre costs about Rs 1 lakh and has an equal amount of annual recurring expense. Malhotra says about 80 per cent of his customers pay. "On average if we get 40 students per centre at the kind of fees we charge, we are viable." HLC is focusing on Project Finland: Mission 2020. The goal of this project is to annually educate two lakh children by 2020
HLC has raised Rs 24.8 crore till date from several marquee investors like Acumen Fund, Lok Capital, Unitus Seed Fund and the Asian Development Bank. "Hippocampus is focused on improving learning outcomes in rural India through empowerment of local women who are trained and employed as teachers. These are truly aligned with the ADB's vision to reduce poverty in Asia," says Aniruddha Patil, Senior Investment Specialist at the ADB's Private Sector Operations Department.

Will Poole, co-founder and Managing Partner, Unitus Seed Fund, says Hippocampus was one of the fund's first investments. "And it's one of our best. We invested based on the capabilities and vision of Malhotra. It's not often one finds an entrepreneur with the ability to achieve the high goals he sets for himself and his team. Second, we invested in a business that can be highly scalable and profitable while serving a dire social need: educating kids during the critical period of brain development, before they enter primary school."

Scaling is certainly on Malhotra's mind. HLC, since launching the first batch of 17 schools in June 2011, today runs 212 schools primarily in Karnataka and Maharashtra, educating about 7,000 kids and hopes to end the year with 300 schools. HLC is planning to next roll out in Andhra Pradesh, Telangana and Tamil Nadu before venturing nationally. While HLC is operationally profitable, it has ambitious goals of eventually running 15,000 centres. It is also looking to raise an additional $8 million to $10 million this year to expand its operations.

Malhotra says HLC is focusing on Project Finland: Mission 2020. The goal of this project is to annually educate two lakh children by 2020 at the same standards as children of Finland of that age get. Finland has, of course, been recognised globally for its high quality of preschool education. HLC intends to deliver the same outcome at one per cent of what it costs Finland. Poole of Unitus says he believes Hippocampus has the ability to achieve incredible scale in fulfilling their vision. "They can do this because they have figured out a scaling model that embraces local communities and their needs, creates new teachers (rather than depending on finding existing ones), and delivers exceptional educational outcomes, making their programmes highly desirable country-wide."

HLC also has started tying up with rural private schools - for a fee - to train their teachers and share their curriculum while opening a new income stream for itself. It already works with 50 private schools. "The intention is not to substitute or take away anybody's business," says Malhotra. "Demand is so huge that there is room for so many more players."