The Uttarakhand floods are a small part of the problem. The country must brace itself for bigger climate change disasters with severe economic implications.

As the heaviest rains in five decades pounded Uttarakhand mid-June, they washed away, among other towns, the picturesque village of Bhyundar, where trekkers often rested before climbing further to the Valley of Flowers. This village of 99 families became prosperous running hotels, shops and managing the garbage created by tourists. Now, most of them need a new beginning - in a different town.

"We can't rebuild houses in the village," says Neha Chauhan. The former Bhyundar resident is in a relief camp 28 kilometres from home. "There are only rocks now and all the land is lost," she adds.

Environmental analysts call people like her 'climate refugees' or 'environmental migrants' - people forced to flee home because of natural disasters. Scientists warn that India could easily have millions of such refugees in coming decades as droughts become more severe, sea levels rise, monsoons get wetter, and Himalayan glaciers melt.

Click here to Enlarge
Global warming may not be the only reason for the disaster in Uttarakhand - nor for other recent natural calamities, such as Hurricane Sandy in the United States - but it certainly plays a prominent role. And its economic implications are serious. The World Bank, in a recent report, warns that climate-related extreme events could push households into poverty.

In India, global warming is likely to hurt agricultural production, fishing and tourism, and deflate asset prices in low-lying coastal regions. A 2007 Lehman Brothers report had noted that every two-degree rise in temperature would knock five per cent off India's GDP. According to World Bank, the world has heated up 0.8 degree Celsius above pre-industrial levels, and many experts warn of catastrophic events if it gets another three degrees hotter.

"There are two things happening to India now," says V. Ramanathan, professor of Climate Sciences at the Scripps Institution of Oceanography in California, one of the world's top centres for ocean and earth science research. "One is global warming, and the other is local air pollution.

As far as the Himalayan glaciers are concerned, both global warming and air pollution are affecting the glaciers."

Click here to Enlarge
Many studies have concluded that the Himalayas are heating up fast - when the world is four degrees hotter, the Himalayan glaciers will have heated at two to three times the global average rate. The melting of glaciers will mean more flash floods and water shortages in decades ahead, as rivers fed by the glaciers dry up.

A report prepared for the World Bank by the Potsdam Institute for Climate Impact Research and Climate Analytics estimates that by the 2050s, with the temperature 2 degree Celsius to 2.5 degree Celsius above pre-industrial levels, water for agricultural production in the river basins of the Indus, Ganges and Brahmaputra will be reduced and this could affect food adequacy for 63 million people.

Some economists say India may have erred in encouraging too much rice cultivation, and should have thought about climate-proofing its farmers. "Neglect of millets has not been a very smart thing to do," says Shreekant Gupta, adjunct faculty at the Lee Kuan Yew School of Public Policy in Singapore. "Millets are more hardy crops. By betting on wheat and rice after the Green Revolution, we have made our agriculture more climate-sensitive." Both rainfall and temperature matter in rice cultivation, and a warmer India with more erratic rainfall is not good news for rice yields, he says.

Rice is the most important cereal food crop in India. According to the International Rice Research Institute, around 65 per cent of India's population eats rice, and it accounts for 40 per cent of the country's food production. Cash crops will be affected, too, by not only water shortages but also unpredictable monsoons. "Intense rainfall will increase when the earth heats up, and moderate rainfall will decrease," says Ramanathan. "Intense rainfall can cause floods. The worst hit will be the farmers, because monsoons will be erratic and they wouldn't know when to plant. Second, air pollution can destroy cash crops by as much as 10 to 20 per cent."

The World Bank says that an extremely wet monsoon, which currently has a chance of occurring once in 100 years, is projected to occur every 10 years by the end of the century.

The impact of global warming on coastal India could be equally ruinous. The World Bank report cited earlier says that Kolkata and Mumbai are potential impact hotspots, threatened by extreme floods, more intense tropical cyclones, rising sea levels and very high temperatures. The fisheries industry is vulnerable, and there are already signs that warmer waters are hurting it.

The Energy and Resources Institute (TERI) recently concluded coastal vulnerability studies for West Bengal and Maharashtra. "Most of the fish species are moving deeper into the sea where the water is cooler," says Suruchi Bhadwal, Associate Director, Earth Science and Climate Change, TERI.

"The catch is getting affected near the shoreline. In terms of fresh water fish, the species we used to find in the middle-level stream of the Ganges have moved to the upper levels - cooler waters - which indicates that the tolerance level for certain kinds of species for temperature has changed for breeding."

Bhadwal says that in West Bengal's South 24 Parganas district, where there is an increased surge of seawater into the coastland because of storms, people have started using farmland for prawn cultivation. "They have changed the agriculture practice," she says. "People are getting a good price for prawn cultivation, but the damage that salt water does to the land is huge. You will not be able to revert to agriculture. It is not a sustainable shift."

So what should India do? The country faces increasing pressure from the global community to reduce its emission of greenhouse gases, which contribute to global warming. The

US Secretary of State John Kerry, during his recent visit to New Delhi, urged India to cooperate in global efforts. While developed countries want India and China to cut emissions by reducing energy consumption, India argues that any such measure would slow economic growth and job creation.

"We have an urgent need to connect the dots," Kerry said in a speech. "When the desert is creeping into East Africa, and ever more scarce resources push farmers and herders into deadly conflict, where people are already, in parts of the world, fighting over water, then this is a matter of shared security for all of us." 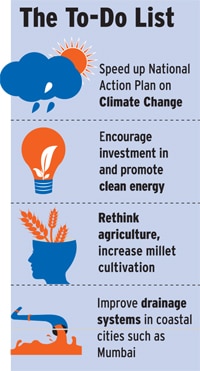 He said countries needed to work together to phase down hydro-fluorocarbons - potent greenhouse gases that come from air conditioners, refrigerators and industrial appliances. "We can eliminate the equivalent of roughly two years' worth of current global emissions by the year 2050 if we were to do that," he said. "India can join China and the United States and other major economies in order to rapidly develop joint technology and pilot programs for low- or no-carbon strategies, which are essential."

The US, however, did not ratify the Kyoto Protocol, an agreement under which most developed nations pledged to reduce combined emissions by at least five per cent between 2008 and 2012, against 1990 levels. The US argued that the protocol excluded developing countries from emissions reduction compliance. Like many other countries, it has its own voluntary goals. A new global deal is expected to be signed in 2015.

Whether the global community can get India to ratify any agreement is a matter of speculation. But the country does need to move faster on its National Action Plan on Climate Change, laid out in 2008. The plan has eight missions, which cover sustainable agriculture, sustainable habitats, the Himalayan ecosystem, strategic knowledge for climate change, solar energy, energy efficiency, increasing forest cover, and conserving water.

TERI's Bhadwal says only two missions have made progress - the solar mission and one energy efficiency. "We haven't heard much of the others," she says.  Climate change perhaps affects the poorest the most. Sunil Kainthola runs a small ecotourism company, Mountain Shepherds, in Uttarakhand. The floods have resulted in an immediate loss of Rs 10 lakh, as he cancelled four treks. The company employs 14 locals and they will have nothing to do until mid-September, by when Kainthola hopes the region's damaged bridges will be rebuilt. Loss of livelihood is a heavy price to pay.
TweetYoutube
Tags: Uttarakhand floods | Floods | Natural disasters | Climate change

Why MNCs are increasing stakes in their Indian units