Export ills: Is there a Cure? In 2012/13, when Pune-based Bharat Forge (BFL), a leading global automotive component manufacturer, faced a major demand contraction in its mainstay business, it quickly diversified its product offerings and increased its revenues from manufacturing equipment and components for the oil and gas, and mining sectors - the high-growth industrial segments back then. This helped the company minimise the impact of revenue loss from the automotive sector.

"We are negotiating the RCEP. We are also resuming talks with the EU, and trying to have agreements with Australia and Canada"

Cut to the current financial year. While BFL's industrial business fell by 36 per cent in the first nine months of 2015/16 over the corresponding period of 2014/15, its passenger vehicle segment sector grew 112 per cent due to a ramp up in new orders during the same period, limiting the erosion in its overall revenues. Amit B. Kalyani, Executive Director, BFL, says the industrial business, which accounts for almost 35 per cent to its revenues, will remain soft in the near-term. "Weakness continues unabated, largely driven by the (fall in) commodity prices," he adds.

BFL had shipped 7 per cent less tonnage between September and December 2015 compared to the preceding three months. Its standalone earnings for the third quarter were Rs 1,052 crore, lower than the Rs 1,197crore during the preceding quarter. In fact, the crash in commodity prices, fall in demand in metals and commodities from key countries, including China, a glut in oil supply and the resultant record low oil prices have taken a toll on the entire oil, metal and mineral ecosystem. "The whole commodity cycle has finally taken a hit," says Kalyani.

Similarly, India's export earnings from engineering products, too, fell to $4.57 billion in February - down 11.2 per cent from the $5.15 billion registered in February 2015. For BFL, the earnings decline was primarily led by lacklustre demand for products from the global oil and mining industries.

When the Going Gets Tough

Bharat Forge was, however, lucky. It had the automotive sector to back its revenue stream. But there were several hundreds of small and medium scale engineering units across the country that are finding it extremely difficult to tide over the turbulent times. "Forging units that cater to the oil sector and companies that manufacture pipes for crude oil lines are the worst hit," says S.C. Ralhan, President, Federation of Indian Exporters Organisation (FIEO). Despite the fact that several of these units based out of engineering product hubs, such as Ludhiana and Coimbatore, are working on two shifts instead of the usual three, the sector is facing increasing idle capacities and job losses.

Indian merchandise exports have also been facing the brunt of global economic uncertainties for more than a year now, and export earnings have been falling steadily for the past 15 months in a row. The commerce ministry, which releases trade data on a monthly basis, indicates that November 2015 was the worst month for Indian exports in recent years at $20 billion, down almost 25 per cent compared to November 2014.

December was not great either. Among the petroleum and commodity sectors, oil meals fell 82.93 per cent and iron ore exports dropped 69.54 per cent year-on-year. Petroleum products, in general, fell 47.69 per cent. Exports of leather and leather products, yarn and fabrics, rice, oil seeds and cashew were also in the negative growth trajectory. The only solace was that, in terms of overall percentage of decline, December, with a 14.75 per cent fall, was better than November, which witnessed 24.43 per cent fall. The position, in terms of month-on-month percentage decline improved further at 13.6 per cent in January 2016, and 5.66 per cent in February.

The severity of the gloom, however, is not across the board, says Nirmala Sitharaman, Minister of State (Independent Charge) for the Ministry of Commerce and Industry, and the Minister of State for Finance and Corporate Affairs. "There are sectors that are doing well, some are plateauing and others are doing badly," she says. The minister's optimism stems from the fact that the non-oil and non-commodity sectors are not faring as badly as the oil and commodity-linked exports. Also services, which is almost half the size of India's merchandise exports, have not seen a sharp fall. Of the top 30 commodities in the merchandise exports list, 14 showed positive month-on-month growth in February 2016, including drugs and pharmaceuticals that grew by 8.77 per cent, and gems and jewellery, which reversed the negative trend to grow 11.19 per cent.

Two, the ministry believes that non-commodity and non-oil sectors have marginally been impacted by the crisis. While jute-based product exports grew 35.4 per cent during April-November over the previous year, handicraft exports saw 16.9 per cent growth and pharma grew 10 per cent. Net services exports during April-December 2015 were estimated at $54.86 billion, down 3 per cent from the corresponding period of 2014. 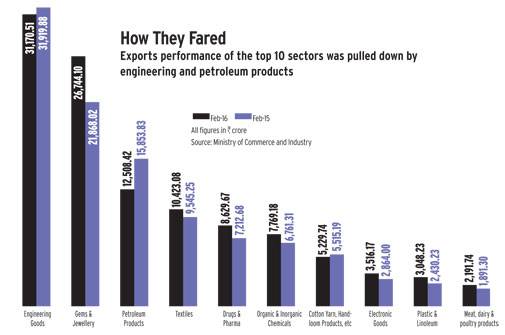 Finally, the fall in exports, in rupee terms, has also not been as bad as it was in dollar terms. "The fall is more in terms of money realisation because of currency fluctuation and low commodity prices. It is not as if your products are not wanted, or your competence level has come down. This gloom is not across the board," says Sitharaman. However, despite downplaying the crisis, the government is taking a string of export-friendly measures.

On January 8, Sitharaman invited representatives and trade ministers of all state governments to seek their assistance in the Centre's export-promotion efforts and become members of the Council for Trade Development and Promotion. "After all, all the action is happening in the states. Whether it is land, electricity or local tax structure, most concerns raised by the exporters are related to states and state government policies," says Rita Teaotia, the Commerce Secretary.

The ministry had also called all 34 export promotion councils representing various sectors to suggest ways to improve the situation. Council representatives lobbied for the withdrawal of minimum alternate tax and dividend distribution tax on export-oriented units (EOUs) and special economic zones (SEZs), and argued that these levies were eroding the competitiveness of such zones.

The government had also announced two major initiatives to support exports some time ago. One, it had suggested a 3 per cent interest equalisation (subvention) scheme on pre- and post-shipment rupee export credit to help exporters reduce their interest burden. Two, it had announced an expansion of the scope of Merchandise Exports from India Scheme (MEIS) by bringing in more products and geographies within its ambit. And three, the Centre was trying to speed up bilateral and multilateral agreements by providing a zero-tariff, low-barrier entry for Indian products into partner-country markets.

"We have introduced the interest subvention scheme and revised MEIS in October. It will take some time to see its impact. At the same time, we are also negotiating the RCEP (Regional Comprehensive Economic Partnership) between the 10 ASEAN members and their FTA partners. We are also resuming talks with the EU and are trying to have agreements with Australia and Canada," adds Sitharaman.

Incidentally, some of the measures intended to promote one sector, are hurting others. For instance, any move to make import of natural rubber costly to protect the interest of rubber growers will directly affect the competitiveness of the Rs 34,000 crore non-tyre rubber industry, which is primarily small and medium scale.

Similarly, the government's recent decision to make steel imports costlier to protect the interests of domestic steel manufacturers is hurting the engineering equipment exporters. "The biggest problem being faced by the engineering industry is the rising cost of raw material, that is, steel. The government is discouraging imports of cheap steel through safeguard duties, minimum import prices, etc.," says Bhaskar Sarkar, Executive Director, Engineering Export Promotion Council (EEPC). According to Sarkar, buying steel at a higher price and selling to the world where overall cost of steel has come down has become a challenge. "If input costs go up, we will just be pushed out of the market," he says.

The Indian pharmaceutical industry, one of the few sectors that has continued to witness growth in the midst of the overall gloom, and the milk and dairy sector have their own concerns when it comes to the free trade agreement proposals the ministry has been negotiating with partner countries to promote exports.

D.G. Shah, Secretary General of Indian Pharmaceutical Alliance, says even the multilateral agreements that India is not part of can harm the interests of the generic drug industry. Referring to the US-led, 12-country Trans-Pacific Partnership, Shah says though India is not a signatory to the treaty, the arrangement would deal a big blow to Indian pharma exports. "An industry that has flourished by export-led growth will have to slow down its investments in manufacturing because it may no longer be able to supply new generics to many countries, " he says.

Even though most measures are industry-friendly, problems persist at the implementation level, too. FIEO's Ralhan, while applauding the efforts, says: "The problem of transfer of shipping bill, verification of MEIS and the delay in release of duty drawback and interest subsidy, have seriously affected the liquidity of exporters." He goes on to add that the government should ensure the benefits announced through policy measures reach the exporters.

All said and done, there is no quick solution to India's export woes as the country can do little to generate external demand. The commerce ministry says that the trend of falling exports is not India-specific. World Trade Organization (WTO) statistics indicate that growth in exports have also fallen for the US (10.51 per cent), European Union (9.48 per cent) and China (7.01 per cent) in November 2015.

However, the overall gloom that impacted both exports and imports proved to be a boon as far as trade deficit was concerned. If we consider merchandise and services, the overall trade deficit of India for April-February 2015/16 was $54.09 billion - 15.79 per cent lower than the $64.24 billion in the corresponding period of last year. A slowdown in traditional channels can also be leveraged to one's own advantage - to become more competitive, to grow up the value chain and explore newer pastures. Sitharaman cites the examples of the Indian automotive component manufacturers and textiles manufacturers, including readymade garments makers, who have set global standards and an export market by virtue of their core competencies. Now, it is time the others follow such examples.

And, even if there is a slowdown in international markets, domestic demand should make up for that. The export slowdown, at least in revenue terms, is unlikely to get over soon as most factors that have led to the current problems, all external, continue.

Therefore, Make in India for the domestic market is certainly an option.