"We like to think we are the biggest start-up"

We like to think we are the biggest start-up - a 200,000 people start-up, says Vishal Sikka
By Prosenjit Dattaand It's been a year and a half since you joined Infosys. What was your first impression?

I always believed that in life nobody can tell us what we should do. We have to find that path ourselves. We have to find our own unique wisdom. And Infosys lived that philosophy. That comes from our focus on education and learning...our ability to educate, and our ability to train. And, that gives us the confidence that we can chart our own path.

There is this tremendous sense of transformation across industries - transformation through software, by computing and by digital. As a result, many traditional IT companies are dying or are going through tremendous change. As a result, there will be new kinds of unicorns that will emerge. However, I see that the transformation is not fast enough to address the needs of the clients. And, I see that as a huge opportunity. We should set our own course based on what we see as our client's priorities - how it will make a difference to their future and what role we can have in that future. We want to transform existing systems and processes - doing completely new kinds of things that we never did before.

You have different ways of handling projects, making them efficient and cost-effective. Do you expect the services industry to exist the way it is or will it change?

Today, you have companies with no baggage and, probably no risk, because they are running on venture capital (money). They are going to the same clients that we do - the best companies in the world. But they are coming up with vastly different value propositions based purely on technology. This is the disruption. If we don't (recognise) it, we will get disrupted. There is one pressure point - the traditional business is about offshoring hundreds and thousands of people. It brings in a lot of cash, and because of scale you are able to bring in profitability. But it's a downward spiral. You keep building up cost and somebody will come and disrupt it and you are stuck with the cost.

The new approach is to look at how to do it in a more efficient way. Parallely, we have to look at the Aikido kind of solutions; where you are bringing in non-linear change and being able to attack new areas with technology. Partly that is what we are doing with start-ups and with our innovation fund - we are building up the ecosystem. And, our clients are willing to co-create with us.

The nature of projects is fundamentally changing - from a people-based (model), towards more and more outcome-based models, IP-based models, unit-of-work type models. Earlier, it was a people-only project. Now, it's Infosys plus the software from Infosys. It is our own software platform that enables us to achieve the same project much faster, with much less number of people, but with a higher margin. The margin is not coming from the fact that there is a piece of software that is highly reusable and, therefore, it has a much higher margin that is amplifying the effect of the people. All new deals that we are doing are software-plus-people - in automation, Big Data, software upgrades, SAP, Oracle, and in testing.

We are also into knowledge-based engineering where we help companies capture the knowhow from their legacy systems so that their change management can become easy.

This industry was absorbing people. But now, you won't need as many people per project.

Do you think, fundamentally, the organisation will begin to look more like a product company?

It's the other way around. Product companies are becoming like services companies. The great transition of our time is the transition of everything as a service.

How far has Infosys transitioned to outcome-based pricing?

Generally, outcome-based pricing is difficult to quantify except in areas where you know very well and agree on an outcome from a provider and consumer point of view. But the unit of work-based pricing, where you could count the number of transactions of certain things, is happening more and more.

In our mix right now, the time and material projects have gone down roughly to about 60 per cent. The rest is fixed price, including transaction-based, outcome-based and unit of work-based (projects).

When you look at what e-tailers have done, do you think IT services firms missed out on a great opportunity? You could have built the core of Flipkart, for instance.

The work that IT services companies did, historically, was largely driven by IT, and that still continues - around optimising operations, maintenance, verification, etc. But more and more of new projects and application development are coming from R&D, marketing, sales and other areas - where a traditional business is being disrupted by new technology, and new ways of workings are needed. On the surface it looks a software project, but the internals are vastly different. Again, the economy of scale is not to be achieved through cheaper people and faster hiring or faster jamming of people into projects; it is to be done through better organisation, better methodologies and better technologies.

Yesterday, we signed a deal for predictive maintenance of turbines with a large company. The reason we could do this is because of new platforms - open-source-based technologies have made it possible to do dramatically larger amounts of computing at very cheap prices.

But the more things change, the more they stay the same. For instance, one of the first projects that Infosys did in 1982 or 1983 was digitisation of machines (1,500-degree furnaces) at the Rourkela steel plant. Today, we would call it an Internet of Things project. Even before he started Infosys, Mr Murthy did the Paris Metro project in the 1970s with self-driving metros. We often get caught up with the new buzzwords, but this stuff has been going on for a long time. 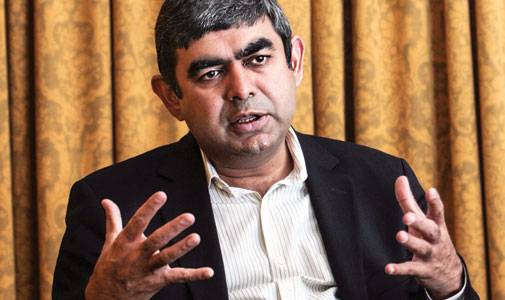 What's your mergers and acquisitions strategy? What have you defined as past technologies and what are future technologies?

There is a famous saying: "you know one, when you see one". Anything that continues with the previous generation's way of doing things would classify as a past thing. Now, what we are interested in is acquiring new kinds of technologies, next-generation things. If you look at Panaya, which we acquired first, it remains an example of software-plus-people.

Does the rise of start-ups affect your ability to hire bright talent?

We like to think we are the biggest start-up - a 200,000 people start-up. We are creating a very decentralised organisation, where each project can operate more or less as a start-up and each project manager can feel the empowerment that a start-up founder feels. There is a lot of excitement around start-ups, but as always, sometimes things get ahead of themselves. I see a lot of hype.

This is one of these bizarre notions that exist in IT services companies that I just cannot get used to. Perfectly normal is the fact that thousands of people are sitting on the bench - 8-10 per cent. Even at 82 per cent utilisation, which everybody celebrates, it is a massive number that is not working. But what do you do with the bench?

Well, at any point in time we have a lot going on. We build products, we do our own software platforms, the applications-as-a-service or the work we do in our internal IT, or in our zero-distance innovations - all these kinds of things can be done by the bench. Therefore, we launched the internal marketplace. That is the whole idea: the bench should be completely eradicated from our thinking - the beginning of the Zero Bench. It started in July 2015. We put together a marketplace, where one can go and see what kinds of jobs are available and the one he or she likes. The other guy sees who you are and what your skills are. Within a minute, an Infosion sitting on the bench should be able to sign up for a job.

Of all the things that you see - artificial intelligence, cloud - where does your biggest hope lie in this transformation of Infosys?

What excites me is the opportunity to build exceptional software that nobody else can build. We have 147,000 software engineers. We have the best ability to teach them, including the best tools, the best curriculum. The things I am most excited about are the kind of things that the team showed me about the turbine. It's amazing to see a digital replica of a turbine - to see things that are not possible to do on a real turbine. Building those kinds of intelligent systems for the most complex problems that our clients have, and those that we have identified using design thinking - this is what keeps me excited. Right now we have probably 150 such things with companies like GE. What I am especially excited about is education. And, that is something we not only do in our work in the company but also in our work in our foundation.

Behind this idea of zero distance, automation and embrace of AI, is a simple philosophy - human potential has no limit. The closer we can get to helping our people get to that potential through the use of technology and education, the better. And the closer we can help our clients reach their potential, the better. That is what keeps me going.

How would you like to be remembered at in Infosys?

Education start-ups are making a comeback