While the public spat at Infosys has abated for now, can the company regain its winning ways?
By Venkatesha Babu        Print Edition: August 13, 2017 Annual general meetings (AGMs) of most Indian companies are boring affairs. The management reflects on the year gone by and gives its perspective on the future, while minority shareholders get a platform to air their opinions. The 36th AGM of Infosys, India's second-largest IT services exporter, held in Bangalore recently, was no different, except for one thing - the atmosphere was sombre this year. Infosys shareholders have seen the value of their holdings fall about 20 per cent over the past 12 months. The entire Indian IT sector is facing challenges but the fall in the sector index has been just 11 per cent. The Infosys shares have given up almost all the value they had gained after Vishal Sikka took over as CEO and MD in 2014.

The biggest reason for the poor investor interest - apart from the challenges that India's IT sector is facing - is the apparent lack of confidence shown by founder-promoters in the management and the counter-response led by Sikka (see Point Counterpoint). Though the not-so-pretty spat seems to have abated for now, will the company be able to do justice to those showing faith in its ability to reinvent itself?

The company is struggling to grow even in high single digits as the global IT services market sees a tectonic shift from IT outsourcing, where Indian players ruled the roost, to digital, cloud, artificial intelligence and automation. Then there is the opposition to outsourcing of jobs in big markets such as the US and the UK that is forcing the players to increase spending for hiring more locals. Infosys has admitted that Sikka's goal of $20 billion revenue and $80,000 revenue per employee by 2020 will have to be postponed. The company has also seen a number of high-profile exits of late even as its bets on innovation and higher-value offerings are yet to pay off.

But what seems to be worrying the market more is the differences between the management and the promoters. None of the original promoters, who collectively own about 12.76 per cent of the company, were present at the AGM. But like Banquo's ghost at Macbeth's feast in William Shakespeares play, Macbeth, they made a statement - that all is not well at the company - by their absence. Though the promoters had stepped down from management/executive roles about three years back, some of them used to make an appearance at AGMs to show faith in the company they had built. 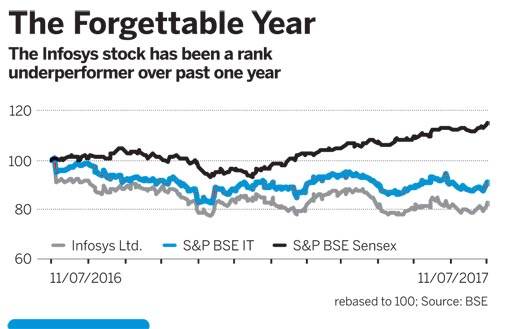 The confrontation had exploded into full public view in February after the former Chairman Emeritus and co-founder, N.R. Narayana Murthy, alleged corporate governance lapses at the company. He has even told a TV channel recently that he regretted leaving the company. Two anonymous complaints to the Securities and Exchange Board of India had also alleged impropriety in a couple of large acquisitions by the company, a charge that the company and its board had rejected. The anonymous complaints also alleged corporate governance lapses and inappropriate payments to a former chief financial officer. Infosys appointed law firm Cyril Amarchand Mangaldas to investigate the allegations; it gave the company a clean chit. After the promoters, led by Murthy, continued to express unhappiness over alleged governance lapses, the board asked Gibbs, Dunn & Crutcher LLP, a law firm that specialises in internal investigation and control risks, to investigate. Two days before the AGM, it also gave a clean chit to the company, but the promoters don't seem to be impressed, if their sullen silence is any indication.

"The promoters clearly don't seem to be satisfied. However, they have only two choices, either sell and exit or force a vote. It is for them to decide their next course of action. It isn't even clear whether all the promoters are together. Uncertainty is not good for shareholders in general," says Shriram Subramanian, Managing Director of InGovern, a proxy advisory firm. Institutional investors hold 58.6 per cent shares of the company. Subramanian says they will play a decisive role in deciding the future of the company.

"Please speak to Infosys for anything connected with them," Murthy said when Business Today reached out to him. Infosys did not respond to a meeting request.

However, a former senior executive seen as sympathetic to promoters said: "Has there been another example of promoters walking away from a world-class company they created? Why should they sell and exit such a cash-rich company sitting on more than `30,000 crore? Infosys set corporate governance standards in the country and all the promoters are asking is that the company adhere to the highest governance standards. Is that a crime?" The principal analyst and founder of Constellation Research Inc., a Silicon Valley-based research and forecast firm, R. Ray Wang, says competitors will exploit this kind of internal turbulence to create fear, uncertainty and doubt. "At this point, there are too many resources chasing the same markets. Real innovation is difficult as shareholders are harder on listed Indian IT services firms than they are on publicly traded non-Indian IT firms. Infosys has to find a way to start building software, operate marketplaces and leverage innovation to grow marketshare in big deals," says Wang. "Market conditions have changed and Sikka will need to adopt a more assertive leadership style and appoint lieutenants who can execute his vision. The vision is realistic but he needs a lot more lieutenants to deliver," he says. But it is here that Sikka must be feeling letdown. The company has, under him, seen quite a few high-level exits of late. The latest is Executive Vice President Ritika Suri, who was brought in by Sikka from SAP and led the acquisition of Israeli automation company Panaya.

A veteran senior executive who wanted anonymity as he is not authorised to speak to the media said, "The promoters should know when to go gracefully. External agencies have said that all the allegations are false. The salaries of CEO and COO are not that high compared with global standards. To run a global company of this scale, we need world-class talent. Vishal (Sikka) is doing his best in a challenging market. The promoters should support his moves."

Though for now the board, led by Chairman R. Seshasayee, seems to have thrown its weight behind Sikka, the promoters' unhappiness with Seshasayee seems to have made the company appoint Ravi Venkatesan as co-chairman. Seshasayee said this would be his last AGM and he would demit office on attaining the age of 70 in the next few months. He also made placatory noises and promised he would spend the remainder of his tenure on increasing shareholder value and smooth transition. "We all recognise that we are but trustees of an extraordinary institution that has been the result of the labour, foresight and genius of an extraordinary group of founders," he said. Sikka even quoted Murthy's dictum that they should become proactive problem finders rather than reactive problem solvers.

Whether these statements soothe tensions or the promoter group is just biding time to make its next move will determine the company's future. For now, though, Infosys is clearly at the crossroads.

Teething troubles: Confusion, fear among traders as they face problems in migrating to GST