G. Seetharaman | Print Edition: Feb 19, 2012
Infrastructure Development Finance Company (IDFC) has made a habit of riding turbulence out. In 2004, CEO Nasser Munjee stormed out after differences arose with the government over the company's future. In came Rajiv Lall, who was Partner at Warburg Pincus. As Managing Director and CEO, Lall not only steadied the ship but also oversaw growth. On his watch, revenues have grown more than six times to Rs 4,550 crore. So have assets, to Rs 47,554 crore. Click here to Enlarge
Diversification into fee-based debt financing, private equity, project equity, investment banking, equity broking and mutual fund business has fared well. Even the Lehman Brothers collapse in September 2008 failed to hobble IDFC. Its lending slowed, but only for a quarter. It averaged 117 per cent growth in loan approvals and 83 per cent in disbursals in 2009/10 and 2010/11.

However, the company that came out unscathed from the global financial meltdown is now cowering before old enemies. The infrastructure sector is beset by problems: policy paralysis, environmental concerns, politicisation of land acquisition, and high interest rates. IDFC, India's biggest infrastructure finance company, can do little to fix them, but has much to lose. Telecom and power account for more than half its lending. 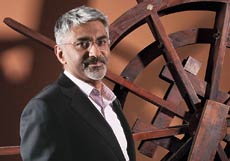 If, in three years, the issues are not resolved, we have to think of diversification: Rajiv Lall
Vaibhav Agrawal, banking analyst at Angel Broking, says concentration risk is inherent in infrastructure financing, but adds: "Beyond a point, if the infrastructure sector is in trouble, IDFC will be impacted."

Bombay Stock Exchange's power index has fallen 38 per cent from its September 2010 peak, while the Sensex has fallen 19 per cent. In July 2009, rating agency CRISIL downgraded IDFC's long-term debt. In October 2011, CRISIL said Rs 56,000 crore of the exposure of lenders to the power sector - 12 per cent of total loans to the sector - would be at risk if reforms made no progress. 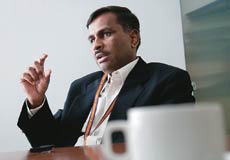 High RoE businesses deliver only 10% of the profit-and-loss; the rest is from loans: Vikram Limaye
IDFC has curbed its ambition. It expects loan disbursals to increase by 15 to 20 per cent in 2011/12, down from the 20 to 25 per cent it hoped for at the beginning of the year. The 2010 target of trebling assets to Rs 100,000 crore by 2013/14 has been abandoned. The company has stopped lending to new coal-fired power projects.

Looking elsewhere
In his spartan office in Mumbai's Bandra-Kurla Complex, the softspoken Lall measures his words: "If, in the next two or three years, the issues are not resolved, we have to think about diversification." He lists the 15-year-old company's possibilities: renewable energy, supply chain financing, and vendor financing for infrastructure equipment suppliers.

Click here to Enlarge
Lall and his team can do little besides preparing for adversity. "Our balance sheet has to reflect the market opportunity in the core sector," he says. "There is also a significant chunk in renewable energy projects, where the construction risk is lower." But he adds that loans to renewable energy projects are much smaller than those for conventional ones.

Things could worsen
A domestic coal shortage has forced power companies to shop overseas, exposing them to global price fluctuations even as they have to keep their long-term commitments with state electricity boards. If fuel prices rise, or if state electricity boards' finances worsen, it could spell big trouble. If power developers' revenues are insufficient, their loans could turn bad. 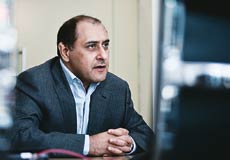 We bring little retail brand visibility, as IDFC is more business-to-business: Naval Bir Kumar
Things look bleak in telecom, too, with low tariffs, the 2G scam, high interest rates and rising debt. Investments in 3G were heavy, and the poor response will extend the payback period. "In road projects, land acquisition and aggressive bids could hurt loan repayment," says Vinayak Mavinkurve, Group Head, Project Finance and Principal Investments, IDFC. Some analysts say IDFC may approach the central bank to restructure its power portfolio. Vikram Limaye, Executive Director, IDFC, says it is a possibility, but "the volume of that will depend on what we do in the next six months". 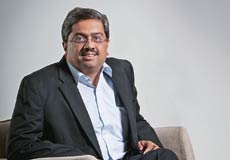 Any asset class moves from high to low to regulated returns. That's what's happening in power: Vinayak Mavinkurve
The easing of investment in infrastructure bonds by foreign institutional investors (FIIs) has turned out to be a blessing in disguise. Sunil Kakar, IDFC's Group Chief Financial Officer, says the company raised Rs 2,700 crore from FIIs last October and November. Mobilisation from the retail market has missed targets in the past two years. "But access to cheaper funds through FIIs will protect margins for now," says an analyst with a domestic brokerage, requesting anonymity. We raised resources overseas through FIIs, as the arbitrage was almost 50 basis points: Sunil Kakar
Since January 2011, while the Sensex has declined 15 per cent, IDFC's stock has fallen twice as much. There is little succour from capital-light, fee-based businesses such as investment banking and mutual funds. "Today, these businesses deliver only 10 per cent of the profit and the rest is from the loan book," says Limaye.
The mutual fund is witnessing a fall in assets under management. Total income fell 17 per cent, from Rs 132 crore to Rs 110 crore in 2010/11. "We bring little retail brand visibility, as IDFC is more business-to-business," says Naval Bir Kumar, Managing Director, IDFC Mutual Fund.

In investment banking, IDFC's bread-andbutter business of raising equity has collapsed. "Mergers and acquisitions is the business we are trying to ramp up," says Tapasije Mishra, Group CEO, IDFC Capital. But M&A cannot make up for the decline in the initial public offering and qualified institutional placement business, where IDFC Capital was a leader with a 25 per cent market share in 2010/11. 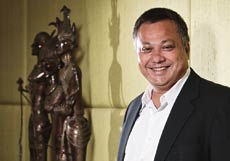 mosimageIf the GDP growth rate falls below seven per cent, it will make things even tougher. "Our singleminded goal is to create an iconic firm," says Lall. The challenge is to ride out turbulence yet again and create new growth engines. That's what iconic companies do.

How Kraft is changing Cadbury India