Is this man for real?

It's impossible to ignore Nikhil Gandhi and his grand game plan of sinking $20 billion into a clutch of big-ticket infrastructure projects. BT’s Virendra Verma deconstructs the man.

One day in the early 1990s, Nikhil Prataprai Gandhi was almost beaten to death by a mob protesting against the development of a port at Pipavav in Gujarat. The port was conceptualised in 1990 by SKIL Infrastructure, a company Gandhi founded with younger brother Bhavesh. Gandhi was badly wounded in that attack. After he came out of hospital, he visited Shirdi in Maharashtra to offer prayers at Saibaba’s shrine. In Shirdi, he befriended a Saibaba follower who, in 1992, introduced Gandhi to the late Dhirubhai Ambani, founder of the Reliance group. That meeting changed his life. “If Dhirubhai uncle had not helped me, I would have been dead,” says Gandhi. Ambani taught Gandhi the virtues of identifying growth-oriented ventures ahead of their time, and executing them on time. The Reliance patriarch would joke that Gandhi was a member of the “zero club”, which meant that he had only one way to go—up.

Nikhil Gandhi
That’s exactly the direction in which the 48-year-old, self-styled “infrapreneur”—an entrepreneur with a focus on infrastructure—has been headed over the past two decades. Gandhi is stingy with the numbers, preferring to point to a study of the SKIL group’s investments by Ernst & Young, which values them at a little over $10 billion as of December 2007. A section of the market dismisses him as a front for Mukesh Ambani (son of Dhirubhai), but Gandhi is quick to retort: “I am a self-made man.”

Today, Gandhi, in true Ambani style, is thinking big. Over the next 10 years, he plans to sink at least $20 billion into a host of infrastructure-related projects that include power, tourism, healthcare and special economic zones (SEZs; see Multi-Billion-Dollar Gambit).

Roughly 60 per cent of the funds required will come by way of debt, and the rest as equity. “I think of creating an opportunity, taking risk and converting it into reality. Where people see risk, we see opportunity,” says Gandhi, who claims to be the first major infrastructure player from the private sector.

Gandhi does have a track record though, but the details are a bit sketchy. After building India’s first private all-weather seaport in the mid-nineties, he went on to notch another first: a 50:50 joint venture with Indian Railways to run container trains over 260 km between the Pipavav port and the Saurashtra region. He also constructed a 20-km, four-lane road connecting the port with the Gujarat state highway. Total investment in these three projects amounted to nearly $500 million. Then one fine day in 2005, Gandhi sold the port to a consortium led by Maersk/A.P. Moller; the rail JV has been transferred to the Railways and the expressway to the Gujarat government.

The man who dreamt of setting up a port when working as a trustee at the Bombay Port Trust has come a long way. In those days it took 12-16 days from preberthing to loading/unloading a ship. Gandhi was thinking way ahead—of building a port on the lines of those that exist in Singapore or Hong Kong, with a turnaround time of less than a day.

Click here to Enlarge
Now he’s taking a couple of giant steps forward. Gandhi will soon start building ships at a shipyard at Pipavav, which he says will be the world’s second-largest, and India’s largest. Pipavav Shipyard Ltd (PSL) is expected to deliver its first ship next year, and the company claims to have orders worth Rs 5,200 crore in the bag. An insider at the SKIL group reveals that Gandhi plans to go beyond building ships, into ship-repair and servicing, as well as building oil rigs. He has been successful in catching the eye of some prominent investors.

Posh Semco Pte (formerly Semco Salvage & Marine Pte) of Singapore is one of them along with Punj Lloyd, which is a copromoter. Financial investors in PSL include New York Life, Blackstone and 2i Capital. PSL is planning an initial public offer, and has made a filing with the Securities & Exchange Board of India (SEBI). The shipyard is just one project in which Gandhi is thinking of pumping billions of dollars. Analysts wonder whether a man who claims to have invested $2 billion over the past six years has the means to pull off projects worth $20 billion over a decade. They point to his SEZ projects—which were conceived a little over a decade ago after Gandhi returned from a visit to Shanghai—of which two are today controlled by Mukesh Ambani’s Reliance group. These are the Mumbai and Navi Mumbai SEZs, in which Ambani has taken a majority stake. An industry watcher says Reliance was brought on board as SKIL was finding it difficult to execute these projects. Gandhi dismisses this claim by pointing to a third SEZ in Jamnagar that he is executing on his own. What’s more, Gandhi believes that it was because of him that an SEZ policy was outlined in March 2000, three years after his Shanghai sojourn. “The industry ministry liked the proposal, but thought it to be too good to be believed,” says Gandhi.

Some of Gandhi’s grand plans that are on the drawing board evoke similar feelings of incredulity. A case in point is the project to create tourism infrastructure in Himachal Pradesh, which is estimated to cost at least $3 billion. Gandhi has a dream of creating a Switzerland in three regions of this hilly state—Una, Manali and Solan. He plans to develop 9,200 acres of tourism and logistics infrastructure (the latter is estimated to require another $2 billion).

This project is expected to be executed by Horizon Infrastructure, a National Stock Exchange listed company that Gandhi bought out a few years ago. The plan includes building an international airport big enough to accommodate Boeing 747s and Airbus A380s. “Every year thousands of people go to Switzerland. Himachal and Uttarakhand are also beautiful, but people do not visit these places mainly because of connectivity and infrastructure problems.” Gandhi says the project is expected to be operational in the next 30 months during the first phase itself, which, apart from the airport, will see the building of villas, cottages, spa villages and Swiss chalet-like houses. 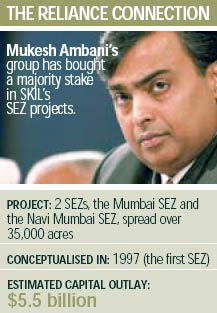 The initial cost of this venture will be around Rs 650 crore, which will be funded through a rights issue of equity shares and convertible warrants, as per an offer document filed with SEBI. Another big idea up Gandhi’s sleeve is “knowledge infrastructure”, in which he envisages an investment of $3 billion. This involves building knowledge centres in 10 cities across the country.

To finance these sky-high ambitions, Gandhi has already begun to roll out his investment game plan. In the current year, he plans to raise $1.2 billion through a private placement of equity in his flagship company, SKIL Infrastructure, and another $800 million via special purpose vehicles. “On $2 billion equity we can raise another $4 billion of debt,” says a confident Gandhi, who expects to raise the entire $6-billion funding during 2008-09. Moreover, he plans to list SKIL Infrastructure over the next 18 months.

Indeed, Gandhi can talk in billions without blinking an eye. He claims to have some of the biggest global as well as local investors in tow. Infrastructure Leasing & Financial Services (IL&FS) is one of them. “IL&FS and SKIL have a common vision of putting up global-scale projects, and it’s this vision that brought the two together,” says Milind Patel, Executive Director at IL&FS. Patel, who has been tracking the SKIL group for 4-5 years, says its shipyard business had run into financial difficulties initially, which eased with IL&FS bringing in investors who were convinced of the prospects of the ship-building business. IL&FS also became a key investor and holds a 6.16 per cent stake in PSL. Askar Capital, a Nordic investment bank, is another believer in the SKIL group. Pavan Bakshi, Managing Director, Askar Capital, is convinced about the group’s expertise in infrastructure, and the potential for king-size returns in this sector.

Yet, there are plenty of question marks around Gandhi. Why are investors willing to back him when he’s got precious little to show in terms of revenues or assets on the ground? Is there more to his alliance with Ambani than just the SEZ projects? (Whilst a Reliance spokesperson declined to comment, insiders at the group reveal that Mukesh Ambani was on the lookout for new growth areas after the split with brother Anil in 2005—SEZs are one of those growth avenues.) Why has he taken over three fledgling companies that have little by way of operations, but whose stock prices have soared in a bear market? On what basis has E&Y handed the SKIL group a valuation of $10 billion? E&Y officials declined to comment, citing client confidentiality. You can admire Gandhi for his gumption, or you could choose to be skeptical about his grand ambitions, but it’s difficult to ignore the self-anointed pioneer of infrastructure creation in the private sector.

In a league of its own