With Islamic banking nowhere on the horizon, the venture capital model gains traction in Shariah financing.

For almost 20 years, Haris Koyisseri invested in his business only from his own earnings. The dry fish merchant in Kerala's Kozhikode never took any bank loan to expand his operations. Why? Bank loans are against the tenets of his faith - Islam - as they charge interest. Four years ago, however, he took on a Rs 10-lakh loan from Alternative Investments and Credits Ltd (AICL). The Kochi-based finance company adhered to the Koran's ban on interest and instead took a share in the profit or loss of a venture it funded. Business has grown 60 per cent since for Koyisseri. "I do not have to worry about repaying the money when business is lean," he says. "Whenever I need additional capital I will take it from a Shariah-compliant fund."

Koyisseri is one of scores of Muslims in the country who rely on Shariah-compliant products from companies such as AICL to meet their funding needs. The development is significant given that India has the world's third-largest Muslim population - after Indonesia and Pakistan - but does not allow Islamic banking. The trend is most visible in Kerala, where Muslims comprise a fourth of the population, but is also catching up in some other states such as Andhra Pradesh and Karnataka. Most Muslim-majority countries, including Saudi Arabia, Iran and Pakistan, as well as the US and the UK allow Islamic banking. In 2005, the Reserve Bank of India formed a panel to look into the issue. Three years later, a committee led by Raghuram Rajan - currently the top economic adviser in the finance ministry - recommended allowing interest-free banking products. But there has been no progress thus far. In May 2012, the RBI revoked AICL's licence as a non-banking finance company (NBFC) citing non-compliance with its rules on interest rates. AICL, which says it financed about 200 businesses with capital ranging from Rs 10 lakh to Rs 1 crore before the ban, challenged the cancellation in the Bombay High Court. The case is pending.

The cancellation, industry observers say, was a fallout of another case. AICL had been offering Shariah-compliant products for nearly a decade. But it came into the limelight only after Janata Party President Subramanian Swamy in 2009 moved the Kerala High Court against Kerala State Industrial Development Corporation's investment in Al Barakah Financial Services Ltd, an NBFC floated to offer Islamic finance products. Swamy argued that a state-run company's involvement in a firm set up on religious lines was against India's constitution. The court threw out the plea in 2011.

AICL, meanwhile, has found an alternative - it plans to launch a Shariah-compliant venture capital (VC) fund. This fund, says Chief Operations Officer Thanveer Mohiyudheen, does not violate any law as capital markets regulator Securities and Exchange Board of India (SEBI) permits pooling of capital from investors. A VC fund is Shariah-compliant as it makes equity investments and shares the profit or loss in a venture, he adds.

AICL is not the only one which is setting up a so-called Alternative Investment Fund registered with SEBI. Cheraman Financial Services Ltd, the new avatar of Al Barakah, has received SEBI approval for a fund to raise up to Rs 300 crore. Kozhikode-based Secura Investment has a real estate VC fund that complies with the Shariah. Industry observers say the RBI's tough stand against NBFCs such as AICL is the main reason why Shariah-compliant VC funds are gaining importance. M. Thomas Isaac, former finance minister of Kerala, says many financial firms in the state work even without the RBI's permission. The idea behind Cheraman and other registered funds is to work under a legal framework, he says. More such funds are in the offing. "Seven to eight Shariah-compliant funds are in the formalisation stage," says Shariq Nisar, Director of research and operations at Mumbai-based Taqwaa Advisory and Shariah Investment Solutions. The firm provides Shariah advisory and investment services. C.H. Abdul Raheem, AICL's founder MD, says four to five SEBI-registered VC funds that comply with the Shariah will likely come up in Kerala in the next few years.

Observers say Bangalore-based Bearys Properties and Developments, Mumbai's Pragmatic Wealth Management, and Chennai-based ETA Group are among those looking to launch Islamic finance products. Taurus Asset Management and Multigain Shariah Investments are also planning to join hands for a VC fund. Bearys Chairman and MD Syed Mohamed Beary confirmed the company's plans to launch a Shariah-compliant real estate fund in the first quarter of 2014. The company is looking at a corpus of Rs 100 crore to begin with and will target wealthy investors, he said. Email queries sent to Pragmatic and ETA went unanswered till the time of going to press.

These funds also provide an opportunity to investors. Muslims are generally averse to investing in stock markets as they perceive it as gambling. Shariah bans investment in companies that make alcohol, tobacco, pork products, and weapons. To attract Muslim investors, both the National Stock Exchange and Bombay Stock Exchange have launched indexes which comprise Shariah-compliant stocks. But the response to these indexes has been muted, says H. Abdur Raqeeb, General Secretary at advocacy body Indian Centre for Islamic Finance. Shariah-compliant VC funds are filling this gap. Raqeeb says these funds, including realty funds, can potentially raise about $1 billion in India.

Masoud Abdul Rahiman, a Kochi-based software engineer with Cognizant, is one such investor who prefers Shariah-compliant products. He invested Rs 6 lakh over two years in Secura's first fund. His first investment installment of Rs 1.2 lakh earned him a return of Rs 1.96 lakh in 2012. "While returns are not guaranteed, I can at least consume the earnings," says Rahiman, who gives the interest income he earns from his bank deposits to charity. Doctors are also investing in these funds, as Kerala develops into a hotspot for medical tourism.

In Kerala, these funds are targeting investors from overseas as well. Cheraman, for instance, is backed by NRIs including P. Mohamed Ali, Vice Chairman of Oman's Galfar Engineering and Contracting Company, and C.K. Menon, Chairman and MD of Doha-based Behzad Group. A.P.M. Mohammed Hanish, MD at Cheraman, says the company plans to hold road shows to attract Kerala's diaspora and sovereign funds from the Gulf countries that want to invest in Shariah-compliant products. 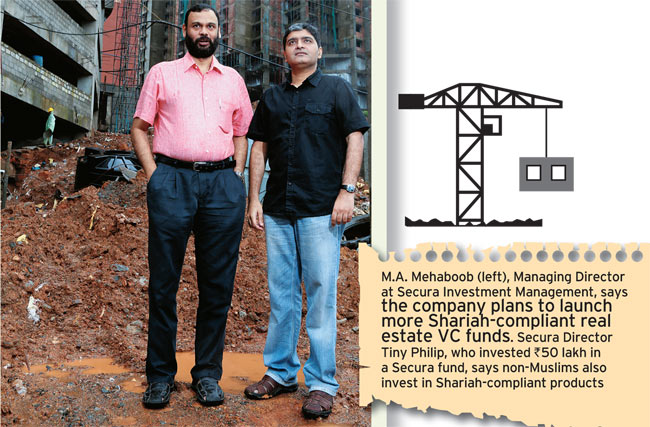 Kerala has a large diaspora, mainly in West Asia. Muslims comprise up to two-thirds of this segment. These workers send a large amount of money back home. Data from the Kerala Migration Survey 2011 show remittances to the state rose 15 per cent to Rs 49,695 crore that year from Rs 43,288 crore in 2008. M.A. Majeed Zubair, Dean at Hyderabad's Institute of Islamic Banking and Finance, says India is an emerging market for capital from West Asia. India has an advantage over China, where language and cultural constraints as well as political reasons discourage investors from West Asia, he adds.

While several companies are looking to launch Shariah-compliant VC funds, some experts are wary. Kerala, they say, has seen several instances of financial companies duping investors. The latest case grabbing the headlines is that of Lee Capital, which reportedly duped investors of as much as Rs 100 crore. 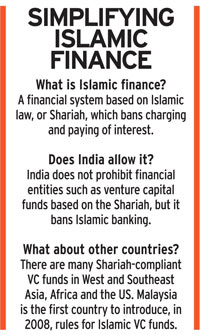 A recent change in SEBI rules is prompting companies to tweak their strategies. SEBI has fixed minimum capital commitment by each investor in such funds at Rs 1 crore. Some industry observers say small investors may pool capital and set up a limited liability partnership that will invest in a VC fund. In its first two funds, Secura routed investment from wealthy investors directly into real estate projects while accepting money from smaller investors. This is because the two sets of investors have different expectations from the VC fund. Managing Director M.A. Mehaboob says Secura will adhere to the SEBI rule in the future and rope in wealthy investors who put in Rs 1 crore in its funds. "We may also come up with multiple funds clubbing investors according to their appetite."

P.C. Anwar, MD at AICL, says the venture capital industry in India may find it difficult to find enough professional managers with experience in Islamic finance. Mahendra Swarup, President of the Indian Private Equity and Venture Capital Association, says Shariah-compliant funds look promising considering they can also attract funding from charitable institutions such as the Wakf Boards. But he adds a note of caution. "We will have to gauge what kind of returns they can generate in the long run."

India Inc heirs reach out to the underprivileged

The cloud could fill gaps in India's education sector