No Debt Too Big

"No dream too big" is Jaypee's motto. Right now most of its dreams are about a light debt burden, its nightmares about falling deals.
Ajay Modi and Suveen Sinha    New Delhi     Print Edition: February 15, 2015 He recovered both times, but his trajectory now seems uncertain in spite of the debt load on his head becoming lighter.

That should have been expected. It is not easy when a deal on which you had been banking suddenly falls through. Twice. The circumstances were out of Gaur's control on both occasions. Who would have thought that TAQA will go away just like that?

In March last year, it had signed up to buy Baspa and Karcham, two of Jaypee's power plants, for Rs 9,689 crore. It was not an obscure buyer. TAQA is the Abu Dhabi national energy company. It already runs a lignite-fired power plant in Chennai other than owning majority equity in a hydro power plant in Sorang, Himachal Pradesh.

Baspa and Karcham, too, are hydro power plants, and both are in Himachal Pradesh. The deal had everything going for it. Once the money came, it would reduce Jaypee's debt substantially.

Even if we have to part with the best operating assets, we will go for it

Instead, all Jaypee received from TAQA was $9 million (Rs 54 crore) in penalty, because the Abu Dhabi company pulled out of the deal four months after signing it.

"That was a shock," says Gaur. Worse, TAQA did not elaborate on the reason for the pullout and gave no room for discussion. "Their entire management has changed in Abu Dhabi. Something has happened. We don't know," says Gaur.

Without wallowing in the failure of the deal, Gaur moved quickly to shake hands with Anil Ambani. "Jaiprakash Ji is a born optimist and I have inherited some optimism from him."

"Jaiprakash Ji" is Gaur's father. He started his career as a civil engineer with the Uttar Pradesh irrigation department and went on to set up the Jaypee Group, known for constructing the Sardar Sarovar dam over the Narmada in Gujarat and the Tehri dam over the Bhagirathi in Uttarakhand. The group's turnover today stands at Rs 20,000 crore.

Their Cross to Carry Click here to Enlarge
The trouble is that debt has kept pace with growth. The combined debt of the group's three listed companies - Jaiprakash Associates, Jaiprakash Power Ventures, and Jaypee Infratech - crossed Rs 57,000 crore (see A Debt Overhang) in 2013/14.

But Jaypee's debt, distributed over many companies, towers over them. CARE Ratings downgraded Jaiprakash Associates' bank facilities twice at the end of last year. Jatin Babbar, CARE Analyst, however, said in the report that the ratings drew comfort from the experienced promoter's record and expertise in infrastructure.

Click here to Enlarge
No such comfort for the stock market, though. The share prices of Jaypee's listed companies have been in free fall (see Shedding Value) even as market indices have soared. And Gaur is out to arrest the fall, keeping the deal market buzzing (see Easing Burden). He is helped in no small measure by the fact that none of his companies is doing badly and the equipment used in his factories is thought of as good quality.

For instance, the hydro power projects have equipment bought from European and Japanese manufacturers, and India's own BHEL; they do not have a screw from China. Kumar Mangalam Birla, Chairman of Aditya Birla Group, is believed to have been attracted to Jaypee's cement plants because of their good quality. Click here to Enlarge
Therefore, the TAQA debacle, as they say in cricket, was a wicket that fell against the run of play. "When you are responsible for an organisation with thousands of people, when you see that banks are supporting you, you have to show good footwork," says Gaur, again invoking cricket.

There are two things other than cricket that appear frequently in conversations with him: old Hindi films and their songs, and God. He attributes the next chapter in the story of his hydro power plants to divine intervention. Interestingly, his belief is rooted in real life.

Anil Ambani had seen Jaypee's Vishnu Prayag project a number of times on his visits to the much-revered shrine in Badrinath. The day TAQA pulled out, July 24, men from the Anil Dhirubhai Ambani Group got in touch with Jaypee to say they were interested.

Click here to Enlarge
Ambani was looking to buy a third plant, the one at Vishnu Prayag, along with the ones at Baspa and Karcham that TAQA had sought. The acquisition could have made Reliance Power the country's biggest private hydro power player. The plants, with an estimated asset life of over 50 years, would have contributed to the company's revenue from the first day. This seemed another match made in heaven, only better.

That was when lightning struck a second time.

On September 24, exactly two months after signing the deal, Reliance Power walked out of it citing regulatory uncertainty and tariff issues. The uncertainly was apparently triggered by the Supreme Court's order on the same day that cancelled 214 coal block allocations.

But it was not long before Gaur had another buyer. Sajjan Jindal, CMD of JSW Energy, sent word that he wanted to step into Ambani's shoes.

"I did not contact them. Within 24 hours of sending the message, Sajjan Jindal flew and met Jaiprakash Ji," says Gaur. Jindal was not available for comment. But he looks committed to the deal.

This is a definitive agreement, unlike the one with Ambani. Moreover, JSW Energy's stronger cash flow gave greater comfort. With the deal, it is now JSW Energy that is poised to become the biggest private sector hydro power producer in the country. In Gaur's colourful language, with Ambani it was just an intent to marry; with Jindal the engagement has taken place and only the wedding vows are to be taken.

Jindal, says Gaur, had spoken to him earlier to explore a joint venture in power. But Gaur's mind, for reasons obvious to anyone aware of his debt mountain, was set on selling assets.

Has that single-minded pursuit made him overlook elements of strategy? With the flurry of deals, Jaypee has reduced its presence in power and cement, but not exited either, ending up a bit player in both. All major business groups make it a point to be among the top two or three in their areas.

Surely, Gaur would have similar ambition. Will he be happy being the fourth- or fifth-largest in cement, compared to third earlier? He will be left with only 12 plants, compared to 19 before the debt-reduction drive started. He will have just one hydro power plant left in his portfolio, down from three, to go with his three thermal power plants.

"There will be opportunities for future growth," says Gaur. The group will claw its way back when things look up. "We will consolidate and Jaypee will stay in cement, hydro and thermal power, and be a significant player in health care, hotels and real estate."

Those who claim to know Gaur and Jaypee well say he might not show the same determination towards fertiliser, a sector he entered by buying Kolkata-based Duncan's plant in Kanpur in 2010, and semiconductors, a project that has been in limbo with no mean contribution from the UPA government's inactivity.

Getting out of those two will go some way to quell the clamour against his rapid diversification of recent years.

Last July, Edelweiss had a buy recommendation on Jaypee Associates, but cut its target price to less than half two months later in the aftermath of the deal dallying. Regulatory issues had arisen for real estate projects in Noida, where Jaypee is building the sprawling, 1,125-acre Wish Town. The brokerage house also frowned upon Jaypee's diversification into unrelated businesses of health care, fertiliser, and semiconductors.

On the face of it, the most unrelated of businesses Jaypee entered in recent years was Formula 1. However, look deeper and you would see it as a clever ploy to showcase the real estate around the Yamuna Expressway, where Jaypee has the right to develop five townships. The showcase now has a thick curtain of uncertainty on it, as Formula 1 bosses, for the time being at least, are not holding races in India. 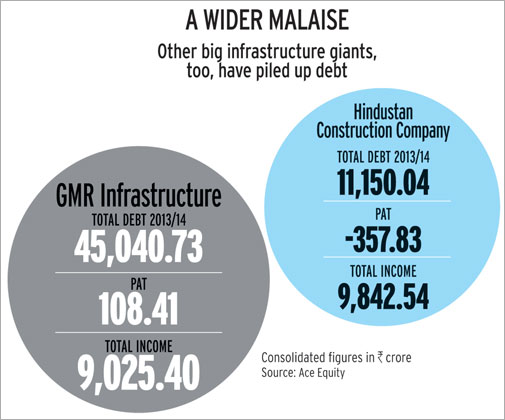 Click here to Enlarge
Diversification would not have been an issue in the heyday of expansion - much of it leveraged - by Indian companies before the financial crisis hit the world in 2008. Since then, it has gone out of fashion.

Gaur says nobody discussed debt-equity ratios back then. "The ratio is always important, but more important is the promoter's commitment to service loans. We always service our loans regularly and timely."

"The group's loans kept on rising with expansion while its assets did not turn productive the way they were expected to, nor did their valuation rise," says a brokerage analyst who declined to be named.

Gaur's arguments fall on deaf ears, going by the loud whispers of a debt overhang on his group that refuse to go away. Gaur says whispers, rather than real issues, beat down his shares. "I don't want to sound critical, but the way our shares have been beaten is not right. We took debt but we have invested in creating assets. We have completed all projects. Not a rupee from the money raised through IPO, FCCB or QIP was kept in the bank. It is very easy to go in for a CDR. We did not."

Gaur says he does not need a CDR because he is already moving heaven and earth to reduce debt. The deals he has struck will reduce it to below Rs50,000 crore. That, he believes, would be within reasonable limits for a group of its size. "Jaiprakash Ji is very clear that we should not give any pain to the banks. Even if we have to part with the best operating assets, we will go for it."

What if lightning struck a third time? "What if JSW pulls out of the deal?" a newspaper reporter asked Gaur after the announcement was made.

"What is the guarantee that your newspaper will come out tomorrow?" Gaur shot back.

The newspaper did. All eyes on Gaur now.

Global hospitality chains get a foothold in India

'We focus to evolve our co into investor-centric one'