January 2006: on board a Kingfisher Airlines Airbus A320, the Chairman of the airline, Vijay Mallya, launches business class. In his usual style, he names it Kingfisher First.

As the assembled journalists tuck into lobster and caviar, he talks with an insouciant air about wiping out the competition. At that time, competition meant Naresh Goyal's Jet Airways, the first choice of business travellers.

The statement turns out to be the first of several flip-flops by Mallya, who had started Kingfisher as a single-class premium airline.

A few months later, at the Paris Air Show, Mallya orders five Airbus A380 aircraft - the largest in the world. In May 2007, Airbus's first A380 touches down in India. Mallya takes the high and mighty of New Delhi and Mumbai on joyrides.

FULL COVERAGE:How Kingfisher landed itself in the mess

When he finds time to speak to the media on board, as the champagne flows, he promises the moon. There will be non-stop flights between Bangalore and San Francisco, he says, and Kingfisher will be one of the world's top airlines. Forget Naresh Goyal, Mallya says he has Emirates, the Dubai airline, in the cross hairs. 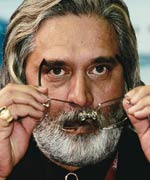 In trouble: Vijay Mallya
Perhaps the heady mix of champagne, the backing of politicians such as former civil aviation minister Praful Patel, businessmen buddies such as Gautam Singhania of the Raymond Group, and an army of yes-men in his company spurred him to target an airline known for its service and punctuality. Ironically, a few years later, Jet and Kingfisher flirted with each other, albeit unsuccessfully in the end.

But at the time, passengers were having a blast. Kingfisher gave each passenger a complimentary kit - a pretty red plastic case containing headphones, a pen and other goodies. The food was excellent. The flight safety demonstration featured Czechborn model Yana Gupta and was shown on seat-back entertainment screens, which were a novelty at the time. Mallya assured passengers that he 'personally' hired the air-hostesses.

Banks effectively own 75% of the airline, and the impact on their books could be devastating if Kingfisher goes under

Model Deepika Padukone, who was not as famous then as she is today, became the airline's brand ambassador. Her image was plastered on billboards across India. But Mallya's political friends could not always help him out.

Denied the opportunity to start international services before completing the mandatory five years of service, Mallya went hunting for another airline which had international flying rights. His bid to buy Air Sahara was thwarted by Goyal, who bought the carrier for Rs 1,450 crore in April 2007.

Employees are furious about not being paid, but say that everyone is not disheartened yet

Deccan was bleeding money and on the verge of being bought by Anil Ambani, as Gopinath reveals in his autobiography. At the last minute, following an emotional phone call from Mallya to Gopinath - the latter later recalled that the conversation was in Kannada - Kingfisher bought Deccan, and eventually reversemerged itself with the low-cost carrier, acquiring its international rights.

Mallya, who cut his teeth in the alcohol business, often likens himself to Richard Branson, the flamboyant owner of Virgin Atlantic. But, in the airline business, as one insider quipped: "Branson uses flamboyance as a promotional tool; Mallya uses it as a management style."

Since Kingfisher began, three chief executives have come and gone, and the latest holder of the unenviable job, Sanjay Aggarwal, has reportedly found a way out as well.

That Kingfisher Airlines was in trouble should have been evident to anyone who has looked at the airline's books: not a single profit-making quarter since inception, the debt burden rising year after year and annual interest payments topping Rs 1,100 crore in 2011. Click here to Enlarge
However, Mallya can hardly be accused of not being astute. Much of the airline is funded with bank loans totalling more than Rs 7,000 crore, even after a consortium of private and public sector banks converted Rs 750.09 crore of debt into a 23.37 per cent stake in the airline in mid-2011.

With Mallya pledging more than 90 per cent of his 58 per cent stake in the airline, the banks effectively own over three-fourths of the carrier. With bad loans already rising, especially in the infrastructure sector, the impact on the banks' books would be devastating if Kingfisher were to go under. "Forget bailing out Kingfisher, the banks are bailing themselves out," says a government official.

The first sign of trouble for the airline came in mid-2008. The merged entity of Kingfisher and Deccan had become the largest Indian carrier with a 27.5 per cent share of the market, and passenger numbers were booming.

Despite this, the airline did not take delivery of five Airbus A340-500 ultra long-range aircraft, even though domestic air travel was growing 30 per cent a year. The European manufacturer, left holding a billion dollars worth of aircraft, was livid. In fact, Kingfisher has more than 90 aircraft on Airbus' order books, but not one has been delivered to it since 2008.

Kingfisher has said this was because the recession in the United States and rising fuel prices made non-stop flights unviable. But rival Jet Airways has enjoyed profits on its India-North America routes, and even loss-making state-owned carrier Air India makes money on non-stop services to New York and Chicago.

"Kingfisher's problems are not external; they're internal," says Nikhil Vora, Managing Director, IDFC Securities. "It is an extremely leveraged company, and the cost structure of the business itself is very high." Neeraj Monga, Executive Vice President at Veritas Investment Research, whose report of September last year said both the airline and its parent UB Holdings were on the verge of bankruptcy, says the airline's strategy was flawed. "The business plan was not well thought out," he says.

mosimage"Kingfisher was to be a luxury airline in a country where price is the key characteristic." Kingfisher's bet on a luxury model runs opposite to the lessons of low-cost carrier IndiGo and Jet Airways' move to increase low-cost offerings on domestic routes.

On a recent flight between Delhi and Mumbai, passengers hooted when Mallya's welcome video came on. Entertainment screens do not work on many planes, and the food is abysmal. Many corporations have advised or ordered employees to avoid Kingfisher to avoid the perceived risk of delays and cancellations.

Mallya has been blaming the media for giving his airline a bad name. In December, he stormed out of a press conference when asked uncomfortable questions. Other than the occasional moderated show on television, Mallya remains ensconced in his multi-million dollar home on Mumbai's Napean Sea Road.

MUST READ:Mallya has to take proactive interest to save Kingfisher: Moily

Unpaid for three months, pilots have been resigning en masse. IndiGo, which also has A320s, has been poaching happily. Signing bonuses of Rs 15 lakh no doubt help things along. It has also been advertising to hire cabin crew.

The Director General of Civil Aviation (DGCA), E.K. Bharat Bhushan, sees no reason for pilots to adhere to the usual one-month notice period if they have not been paid. As for the future of the airline, Bharat Bhushan, who tore into its executives for over two hours on February 20, says: "They have an approximation of a plan."

Kingfisher, which still has 63 aircraft registered in its name, according to DGCA, excluding two private helicopters, has seen five aircraft return. Two A321s were recently returned to Wells Fargo Bank in the US. Filippo Bagnato, Chief Executive of regional aircraft maker ATR, said publicly in Toulouse, France, that Kingfisher had missed pre-delivery payments on 38 ATR-72 aircraft.

There are still some Kingfisher loyalists. A rival airline executive says: "The biggest miracle is that they still keep flying. Pilots and crew still come to work, despite not being paid since December." A Kingfisher employee in Mumbai says: "Employees are furious about salaries not being paid, but everyone is not disheartened yet. There is anxiety about when things will settle down."

Kingfisher told Bharat Bhushan it would clear employee dues by March 20. But can Mallya pull off a miracle before that? If more people like Delhibased businessman Rahul Chopra, who has sworn to fly the carrier till its dying breath, can be found, maybe Mallya can find a way out.

Then again, this may be a good time for him to cut his losses, which really are not that high, and get out of aviation. If his ego will let him.