The inside story of how Ambani’s trusted lieutenant is attempting to make over a modest family business of plastics processing and textiles into an infrastructure Goliath.

They were both born in 1957, one in January and the other three months later. They studied in the same school (Abaay Morischa School in Mumbai), in the same class. Thereafter, they went their own ways—one graduated from Bombay University and the other got a Bachelor’s degree in Chemical Engineering before pursuing an MBA from Stanford University. But, they always remained the best of friends. They also had the same mentor: One, Dhirubhai Ambani.

One of the two friends is, of course, Mukesh Ambani, son of Dhirubhai, and Chairman of the Reliance Group of Companies. The other is the lesser known Anand Jain. Whilst Ambani went on to find a place in his father’s textiles business in 1981—spearheading backward integrations into polyester and petrochemicals—Jain waited for four years before venturing out on his own.

In 1985, Jain, whose father owned a transport business, started Jai Corp., and began manufacturing plastic bulk containers. A year later, he was quick to take advantage of partial delicensing in the steel industry and set up a galvanised steel rolling unit; he also put up a yarn processing unit soon after.

The similarity in businesses with the Ambanis (plastics and yarn)—albeit not in scale—are visible, and Jain is quick to acknowledge the role of Dhirubhai in his entrepreneurial journey. “He taught me how to think big and out of the box,” says the five feet, five inches tall Jain, sitting in his eighth floor office of Maker Chambers III in Mumbai’s business district of Nariman Point. Inevitably, a picture of Dhirubhai hangs on one of the walls.

Maker Chambers III is, of course, cheek-by-jowl with Maker Chambers IV, which houses the headquarters of the Ambani flagship, Reliance Industries (RIL). Jai Corp.’s operations may have been keeping Jain busy, but he has been as involved—if not more—with the Reliance Group for many years now. 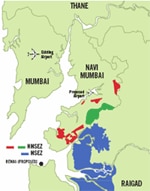 Click here to Enlarge
Jain has played a role in many key fund-raising exercises, and today is considered one of Ambani’s trusted lieutenants (another is Manoj Modi, who is at the forefront of the group’s mega-gambit in organised retailing). The proximity to Ambani also explains Jain’s e-mail address (and the headline to this feature).

Today, Jain is Ambani’s point man who is at the helm of an audacious Rs 37,430-crore infrastructure-creation game plan, which includes building two new cities, in the guise of special economic zones (SEZs), from scratch. And that’s only the first phase of the project. Once vertical construction starts, the total investment could go up to a mindboggling Rs 2,24,866 crore, which is almost two-thirds of RIL’s current market capitalisation. 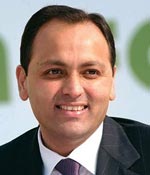 Nikhil Meswani
Jai Corp. is a 10 per cent stakeholder in most of these projects, which ensures that Jain’s financial commitments are relatively insignificant. But from Jai Corp.’s perspective—which had sales and profits of Rs 438 crore and Rs 128 crore, respectively, in 2007-08—these projects, if successfully executed, could propel this hitherto manufacturing alsoran into the elite league.

Mukesh Ambani
More than his own company, however, Jain has the responsibility of translating Ambani’s dream of creating cities that will be home to over a million people, and provide employment to over 2 million (Ambani is the lead investor in these projects, via privately-owned companies and not via RIL). That explains why Jain has also emerged as a key player amongst those who want to beef up Mumbai’s woefully inadequate infrastructure.

After all, if Ambani’s SEZ projects have to become viable, connectivity to them from the mainland of Mumbai is an imperative. Jain is a member of the government of Maharashtra-created ‘Empowered Committee for Transformation of Mumbai into a World-class City’. Other members include industrialists Anand Mahindra, Noel Tata and Jamshyd Godrej.

Jain’s vision involves simplifying travel from greater Mumbai to the outskirts via a sea link and, more importantly, by using the waterfront more effectively. For instance, he travels to the SEZ sites—the Mumbai SEZ and the Navi Mumbai SEZ—in a speedboat and reaches there from the southern-most tip of Mumbai in just 10-12 minutes (a journey by road would take a couple of hours).

Even Mukesh Ambani and his family used the same mode of transport when travelling to the stadium in Navi Mumbai for the Indian Premier League matches. “If I can travel by speedboat, why cannot other people?” questions Jain, who expects this mode of transport to be opened to the public soon. Eventually, however, Jain fore-sees millions of people working and residing within these cities themselves.

He wants to attract the stillbooming information technology sector to this region, and provide an attractive option to Bangalore and Hyderabad. The only way of doing this: by providing lower property prices (lower than those in Mumbai) and better infrastructure than that prevails in Mumbai. The two SEZs will be spread over 17,000 acres— that’s equivalent to the land mass between Colaba at the southern tip of Mumbai to Bandra in the suburbs— of which some 5,000 acres have yet to be acquired. Jain acknowledges that protests by local farmers haven’t made the task easy, but he’s prepared to struggle. That he already has 12,000 acres gives him the confidence to begin work on the land already acquired. 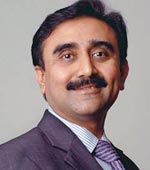 Nikhil Gandhi
Rumours of arm-twisting by Jain’s men to acquire land have somewhat sullied his image. But Nikhil Gandhi, Chairman, SKIL Infrastructure, who is partner in the two SEZs, reckons “Jain is the most misunderstood man”. He says during the land acquisition process, his main objective has been to ensure long-term sustainability of the villagers in the area. “Anandji has taken this project only because he was convinced of its viability,” adds Gandhi.

That Jain is Ambani’s lieutenant is quite clear, but that doesn’t mean he doesn’t have his own vision for his own company, Jai Corp. He is looking at developing real estate on the outskirts of the SEZs, along with independent townships, as the area within the SEZs will not be enough to cater to housing needs. “Every person would need an average of 50 square feet of office space and three times that for residential needs,” he explains. Jai Corp. is planning to develop two townships along the Mumbai-Pune Expressway, of 300 acres each. It is also planning a township in Talegaon and one in Nasik.

Of course, it’s quite likely that Ambani will also be an investor in many of such projects, including a port at Rewas (on the western coast), and a 2,000-MW power plant near the SEZs. The power unit will run on gas supplied by RIL. Some will see these developments as a backdoor entry by Mukesh Ambani into a business where his younger brother Anil is present—which may renege on the settlement agreed on by the two brothers that they will not intrude into each other’s businesses.

“The agreement is between the brothers and not with Jai Corp.,” quips Jain. Other than infrastructure, Jai Corp. has entered into financial services by setting up a real estate fund. The ‘Urban Infrastructure Fund’, which has Nikhil Meswani, Executive Director, RIL, as one of its advisory committee members, has a corpus of Rs 3,300 crore; it also advises a $550-million (around Rs 2,250 crore) offshore fund. From this business, Jai Corp. will earn a 2 per cent annual fee for the domestic fund and 1 per cent from the offshore fund every year till their maturity.

In addition, the company will charge a 20 per cent fee at the time of maturity from the domestic fund. The Jai Corp. stock, for its part, has been shattering all records, rising almost 2,800 times in the last two years, ostensibly on the back of the upside that lies in the company’s new focus on infrastructure.

Jain has used the opportunity to make the stock more liquid: he has increased the public holding by issuing a bonus and splitting the share, in a bid to entice institutional investors. The company has a current market cap of Rs 7,000 crore, and a P-E of 48 (based on 2007-08 profits). The long journey to justify such valuations has only just begun.

Are the dark clouds for real?