For anyone keen to venture into the restaurant business, it is the classy fine dining that strikes the imagination. Haughty and buttoned-up waiters, a formal style of service, hushed rooms, starched linen tablecloths, high-quality decor and dedicated meal courses - altogether a genteel and upmarket experience. This is what until 2012 Manu Chandra, who was then executive chef at Olive Beach, a fine dining Mediterranean cuisine restaurant in Bangalore, and his colleague Chetan Rampal, business development manager, too imagined for themselves when they decided to turn entrepreneurs. Chilled out: Rahul Akerkar, Founder and MD, deGustibus. Photo: Danesh Jassawala
But when they took a close look at the average pay-out per person in such a restaurant, they gave the idea a re-think. At fine dining restaurants like Olive Bar and Kitchen or Hakkasan in Mumbai, it is anywhere between Rs 2,000 and Rs 5,000. Are Indian consumers ready to pay for this experience? "A fine dining restaurant requires huge investment. It is difficult to get good returns in a challenging economy," says Chandra.

Of course, a flagging economy does not mean the upper middle-class has stopped dining out. "But they may shy away from paying Rs 2,000 per person. Also, those in the age group 20 to 35 are looking for interesting dining-out experience. So we needed to create an aspirational place," says Rampal. This led them to open a more casual Monkey Bar, the country's first gastropub, in Bangalore. A gastropub is a classical pub that also serves good food at affordable prices.

The venture was timely and the break even was attained in six months. "Most pubs were dark and dingy watering holes. There weren't too many food options," says Chandra. At an average Rs 800 per head, the Monkey Bar, which can accommodate close to 300 people, not just served cocktails and beverages but also offered myriad food options like char-grilled burgers, vada pav and the Goan Chorizo Pao. The duo has since then set up three more such bars, two in Delhi and one in Bangalore.

Owners of several iconic fine-dining restaurant chains like deGustibus Hospitality, which operates Indigo and Tote on the Turf, are fast learning that smart casual dining makes more business sense in these times. Of the Rs 9,500-crore restaurant business, casual dining forms the core with Rs 4,000-crore. This is expected to touch Rs 9,000 crore by 2018, according to industry estimates. The fine dining market remains at Rs 500 crore. So while deGustibus is expanding its casual dining restaurant chain Indigo Deli, Olive Bar and Kitchen is focussing on Olive Bistro and SodaBottleOpenerWala.

Unlike their fine dining counterparts, these places provide a more relaxed dining experience and offer an all-day menu with more casual options like burgers, sandwiches and sliders. The average cost per person in a Bistro or Deli is between Rs 800 and Rs 1,200. By keeping the cost low, these restaurants are attracting higher footfall. "The profitability in casual dining is higher because there is volume. Fine dining does not generate volumes. So our growth will be on the back of this format," says A.D. Singh, Managing Director of Olive Bar and Kitchen.

Singh has opened four Olive Bistro in the past few years. Through SodaBottleOpenerWala in Gurgaon, he has also stepped into another format that serves Mumbai street food. He says it is his tribute to Irani cafes of Mumbai. With Aditya Birla Private Equity picking up a minority stake in his business, he plans to open similar outlets in Delhi and Bangalore this year. Rahul Akerkar, Founder and Managing Director of deGustibus, too has opened six Indigo Delis in Mumbai and one in Delhi.

Setting up one such Deli costs him Rs 2 crore to Rs 3 crore. But he says it is far more profitable than setting up an Indigo fine-dining restaurant. Also, there are some must-haves in fine dining that the casual dining business can overlook, such as elegant space. For instance, Akerkar invested Rs 4 crore 15 years ago to set up Indigo in a quaint bungalow in an upmarket locality in South Mumbai. "If I were to invest today, it would cost me three times more and I am not sure about the returns," he says.

Can he repeat it in a mall today? No. "Fine dining requires elegant space. Also, you need to get more volume to pay the rent. In fine dining you cannot do volume," he said. Instead, a mid-level casual dining restaurant in places with high footfalls like malls can get more customers.

Both Singh and Akerkar agree that running a casual dining business is also economical. Unlike fine dining where imported and expensive ingredients are used, here they can source ingredients locally and still produce good food. "We still use quality ingredients and make very good breads. The chefs too are high quality and a lot of thought still goes into each dish. For the customer, its a friendlier restaurant and not intimidating in terms of ambience and price," says Singh.

When Singh set up Olive Bar in 2000, fine dining was limited to five-star hotels. Then the customers were looking for similar quality in a slightly more casual and relaxed environs. "This led to the birth of standalone fine dining restaurants such as ours. Now the customers want to be even more casual. They want to go in shorts and have a nice meal," he says.

Even a matured market like London, known to have some of the best fine dining restaurants, is going the casual dining way. But even today the upper class in London won't hesitate to spend Rs 300 to eat in a Michelin Star fine dining restaurant. And it is here, according to Akerkar, that India differs. "We have a huge middle class that has made money but are not exposed from the point of view of palette. They are eager to taste and buy but the decisive factor is price. The value for money when you eat at a high end dining is not appreciated yet in India," he says.

For any fine dining restaurant, 35 per cent to 40 per cent of revenue comes from sale of liquor. For casual dining, it is around 15 per cent. In India, there are long festive periods during which people often keep away from liquor and this makes standalone fine dining business unviable. 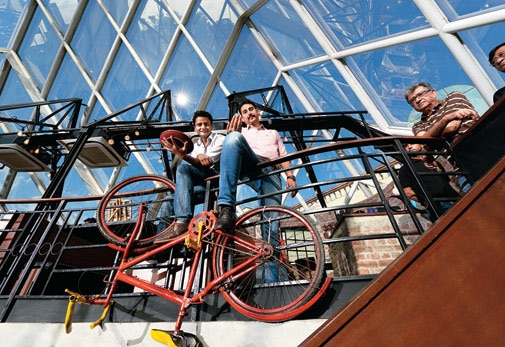 Innovative pub: Monkey Bar partners Manu Sharma (left) and Chetan Rampal. Photo: Shekhar Ghosh
According to Uday Menon, Chief Business Officer of Barbeque Nation, fine dining does not work unless it is part of a big hotel. "If you are part of a hotel you get to import duty-free foreign liquor. A standalone restaurant has to buy liquor at regular retail price, which is prohibitively expensive," he says.

Celebrity chef Sanjeev Kapoor who operates 29 gourmet Indian restaurants under the Yellow Chilli brand, says only value dining format makes sense in India. Working in five-star hotels, he says, has made him aware of inefficiencies of fine dining. "It starts from the way you peel a potato or how sensitive you are to the area in the kitchen you are using, how sensitive you are to the electricity you use. It's a direct conversion to the share of wallet that a diner will pay," he says.

Kapoor says that most fine dining restaurants in hotels charge the same price for a vegetarian and a non-vegetarian meal especially when they do a party menu. "They throw in a beer or a glass of wine into the menu and do a common pricing even for those who don't consume alcohol. These are inefficiencies and I removed them. This helped me serve the same chicken, the same paneer but at 50 per cent cheaper," he says.

So for the time being, it is great food served in a pleasing ambience at an economical rate. So what if there is no fancy table cloth or expensive bone china crockery? "The level of informality and casualness helps separate the formats of today from that of yesterday," says Singh of Olive.

The role and future of technology in India