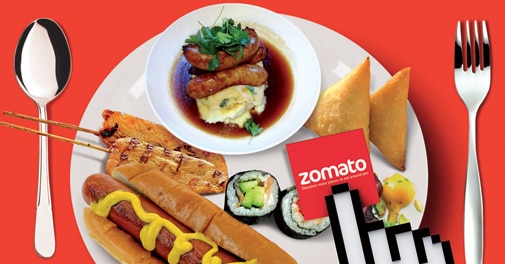 One afternoon in July 2008, an idea struck two Gurgaon-based employees of consultancy Bain & Co. Deepinder Goyal and Pankaj Chaddah noticed their colleagues waiting in queues in the office cafeteria to pick up a menu and place an order. What if they could order food sitting at their workstations? The duo scanned the menu and put it up on the office intranet for everyone to see on their desktops. The response was encouraging. Soon, the two Indian Institute of Technology-Delhi alumni left Bain to work full time on an online restaurant search guide. "We thought 'Let's try for a year. If it doesn't work, it should be easy to find a job back'," says Goyal. "But luckily, we didn't have to get back to a job."

The online restaurant guide Goyal and Chaddah started is now known as Zomato. The duo mobilised about Rs 40 lakh from friends and relatives in return for equity to start the venture. It began by listing the eateries in Delhi's restaurant hub Hauz Khas. Now, it has a presence in 11 countries and lists 180,000 restaurants. Its website gets 15 million visits a month and it clocks revenue of Rs 3 crore a month, compared with Rs 1.5 lakh a month when it began five years ago.

Sanjeev Bikhchandani, Founder and Vice Chairman of Info Edge, says the valuation has risen substantially with each funding round but refuses to give a number. "It has been a function of the value the brand has created for consumers and for listed restaurant owners who expect traffic to increase," he says.

Vishesh Bachan Nanda, General Manager at Delhi-based restaurant Thai High, vouches for Zomato. Nanda used the food guide portal for marketing Thai High, just as he did in his previous stints at restaurants Veda, Kink and Second Sin in the National Capital Region. "We got 11 calls from Zomato on the first day of listing," he says.

How does Zomato work? The company employs about 650 people globally. Of these, 100 work as content collectors who walk the streets and get a laundry list of information on existing and new restaurants. "Collecting information is a highly labourious process," says Goyal, who is also Zomato's CEO.

The list includes pictures, scanned menus, and other information such as the credit or debit cards they accept and whether they offer Sunday brunch. The company earns revenue from advertising by listed restaurants. Ad rates vary between Rs 5,000 and Rs 3 lakh a month, depending upon location, cuisine and other factors.

"The funniest part of our business is that a large number of restaurant managers haven't heard of this thing called the Internet," says Goyal. "The sales guys have to educate them." Info Edge Founder and Vice Chairman Sanjeev Bikhchandani says Zomato's valuation has been a function of the value the brand has created for consumers and listed restaurant owners. PHOTO: T . NARAYAN
Zomato isn't the only online food guide in India. There are a number of others such as Burrp, part of media conglomerate Network 18 Group. It faces intense competition in other countries, too. There is HungryGoWhere in Singapore, where Zomato does not want to operate because of stiff competition. In the United Arab Emirates, where Zomato claims to have 65 per cent market share, it has rivals such as Yadig and Timeout. And then there is US-based Yelp, which operates in 31 countries and is the biggest company in the online restaurant-listing segment with a valuation of about $4.4 billion (Rs 27,700 crore).

"We also face indirect competition from sites specialising in online food ordering like Just-Eat and table booking sites like Toptable," says Chaddah, who is Chief Operating Officer at Zomato. 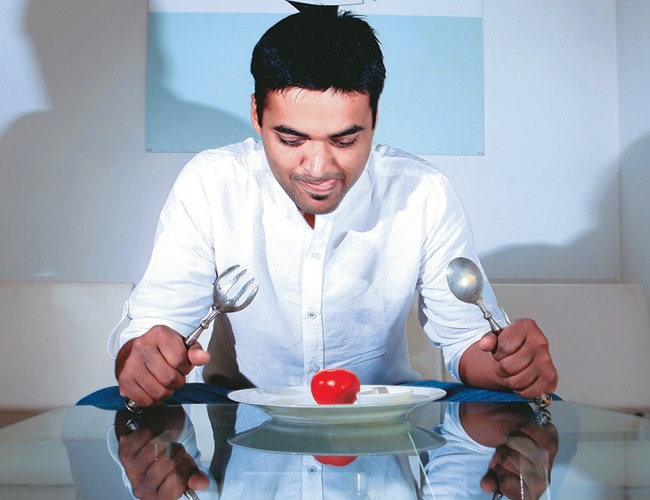 Zomato Founder and CEO Deepinder Goyal says the funniest part of our business is that a large number of restaurant managers haven't heard of the Internet. PHOTO: ADITYA KAPOOR
So, how is Zomato different from its rivals? Unlike some of its competitors such as Burrp, which expanded from restaurant listing to other segments such as events and retail outlets, Zomato has stuck to its core function. It has also reacted swiftly to technological developments. With more and more consumers using phones to search for food, the company launched a mobile application in 2011. The app has recorded 2.5 million downloads so far.

Zomato's only differentiator, says Goyal, is rich content on restaurants and a great product with an easy-to-navigate user interface that makes consumers come back. Competition doesn't worry Goyal and Chaddah. Their biggest challenge so far has been hiring good people, especially for senior positions. "We look for a rare breed of people who are more passionate about building something than making money. These should be people for whom even taking a salary cut doesn't matter," says Goyal. 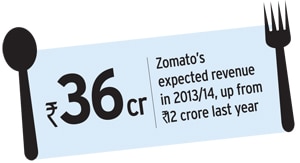 The duo wants to make Zomato a global consumer brand. They plan to use the latest funding round to reach 22 more countries within two years and aim to list the company on stock exchanges in three years time. Revenue is growing rapidly and will likely touch Rs 36 crore in 2013/14 from Rs 12 crore last year, says Chaddah.

What about the bottom line? The company says it is profitable in India and the UAE but not in other countries. "We are still investing heavily in building our teams in other countries and about 70 per cent of the funds raised are going into salaries," says Chaddah. Retaining investor interest will be key to maintaining growth. If its track record is any indication, it will have little trouble doing that.