SBI, the largest bank in the country, has created building blocks for capturing the next growth cycle with sharper focus on risk and returns A decade ago, the market share of State Bank of India (SBI) in deposits and advances was around 18 per cent. Today, it is 23 per cent. The merger with five associate banks helped but, to its credit, India's largest bank with assets of Rs 36 lakh crore hasn't lost market share in the last few years despite stiff competition from market-savvy private banks, which have doubled their market share from 15 per cent to around 30 per cent in the last one decade. SBI has also been way ahead of other public sector banks (PSBs) in creating a universal banking model, expanding retail assets, technology adoption and nurturing a high-quality human resource pool. Eighteen months ago, the government selected half-a-dozen managing directors (MDs) and Deputy MDs from SBI to fill the top slot in other PSBs such as Syndicate Bank, Indian Bank, Central Bank, Andhra Bank and Dena Bank.

The 62-year-old Chairman, Rajnish Kumar, who completes three years at the helm in October this year, is fully focused on taking these achievements forward and making the bank a nimble giant. His focus on corporate credit revamp, strengthening retail book, digitisation and creating building blocks for synergy with subsidiaries is already bearing fruit. "We are on track to exploit future opportunities," he says sitting in his 18th floor office at SBI Bhawan in Mumbai.

However, size alone will not help SBI survive the coming turbulent decade. The four large PSBs - created after the merger of 10 PSBs - each with Rs 10 lakh crore-plus balance sheet will compete directly with SBI. The bank will also face stiff competition from Bank of Baroda, in which Dena Bank and Vijaya Bank have merged, apart from IDBI Bank, which has got a new pro moter in LIC. Private sector banks are also getting their act together after several high-profile CEO exits and governance issues, though some suggest that the integration of 10 large PSBs will give SBI a window to gain market share. "SBI could gain market share in the short run given its healthy capitalisation and favourable credit-deposit ratio," says Yuvraj Choudhary, research analyst at Anand Rathi Shares (See Cut Above the Rest). The SBI chairman says the opportunity is large enough for everyone to survive and thrive and adds that he is focused on creating building blocks for capturing the next growth cycle with much sharper focus on risk and returns. 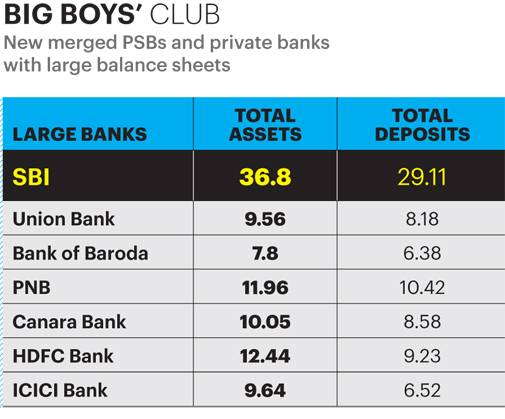 Like other banks, SBI has been facing deterioration in asset quality since FY15. Now, the tide is turning. Gross NPAs, 10.91 per cent in FY18, were down to 7.53 per cent in FY19, thanks to strengthening of the credit risk process. The exercise started in 2018 with creation of a new credit review department. The bank earlier had two departments - corporate account group (CAG) and mid corporate group (MCG) - to process applications based on loan size. "We decided to put a limited number of accounts in the CAG. The idea was to serve large clients quickly and in a focused manner. We also started targeting fee-based income from the CAG," says Kumar. The MCG was re-christened as the commercial credit market group. "Size is not the criterion for these two groups now. The determining factors are quality of credit and potential for other income," says Kumar. The project finance team has also been strengthened. The bank has also inducted sector specialists (lateral hires) and improved the due diligence process for approving loans. "We have also strengthened the stressed asset resolution group," says Kumar.

The bank is also reworking its loan portfolio. It has huge exposure to infrastructure, iron & steel, services, agriculture, home loans and auto loans. The share of services has risen from 7 per cent to 12 per cent over the past several quarters. Kumar says the reason is NBFC funding (which comes under service sector lending). Similarly, the bank is now focusing on investment grade companies. Kumar is not much bothered about new pockets of stress threatening banks. "Agri NPAs have been historically high. Recent loan waivers have complicated the problem in some states. We are dealing with it," he says, adding, "The Mudra loan portfolio is not very large to create any problem." The agri portfolio is around 10 per cent of total advances of Rs 20 lakh crore. The bank is also serving far-flung areas. It has been adjudged the Best in Rural Outreach too.

Unlike other PSBs, SBI has built a big retail book, which should put it in good stead in the coming years. "There has been a change in our portfolio mix. Retail has become more predominant with 58-60 per cent share. Everybody feels safer in retail banking," says Kumar. The retail book comprises home loans, auto loans, personal loans. In the last seven years, the home loan portfolio has grown from 13 per cent to 22 per cent. The bank includes agriculture and SME loans in the retail book. The pure retail portfolio, without these, is around 36 per cent.

However, it is in retail that the bank will face some of its toughest challenges. In the current fast-changing market, many private sector banks are positioning themselves as consumer banks. This means competition is going to intensify in the secured home loan portfolio where margins are already under pressure, though retail credit growth will continue on the back on India's consumption story.

"You need capabilities to exploit the retail story. There has to be a strong technology platform to survive in the cut-throat retail banking. You also need a very strong collection mechanism," says Kumar. In addition, the bank has to explore areas such as consumer durables financing, micro loans and affordable housing loans where private players have made decent gains over the years. Is there a threat of defaults in retail as the economy slows down? "There is no elevation of defaults in our unsecured retail portfolio. It all depends upon your customer segmentation, underwriting standards and pricing of risk," says Kumar.

In retail liabilities, the bank is sitting on a comfortable CASA ratio of 44.72 per cent. Kotak Mahindra Bank has the highest CASA ratio of over 53 per cent. "I can increase my share in CASA if I want to. It's a function of interest rates," says Kumar. But it will not be easy. The new private sector banks and Small Finance Banks are offering higher savings and fixed deposit rates to wean away customers from well-established banks. The competition for deposits is only going to intensify.

SBI has proved that it is as nimble footed as private sector banks in digital banking. "It has made significant investments in building digital capabilities, which is helping in higher cross-selling and origination opportunities while maintaining strong control over operating expenses," says Nitin Aggarwal, Research Analyst at Motilal Oswal. The bank currently opens over 60 per cent savings accounts digitally through YONO, its banking app. It has disbursed over Rs 10,000 crore digital loans in FY20 till date. YONO is proving to be a gateway to attract young customers.

"We have a good number of customers in the 20 to 40 age group. The main attraction of the app is the online marketplace. It's a hook for the younger generation," says Kumar. Already, the bank has made available four dozen financial products, including mutual funds, credit cards and insurance, on YONO, which is likely to reshape the banks branch and people strategy as customers migrate to digital channels. Currently, a large share of rural and semi-urban branches (61 per cent) makes it an undisputed leader in achieving financial inclusion objectives. It has been selected as the best bank in rural outreach. 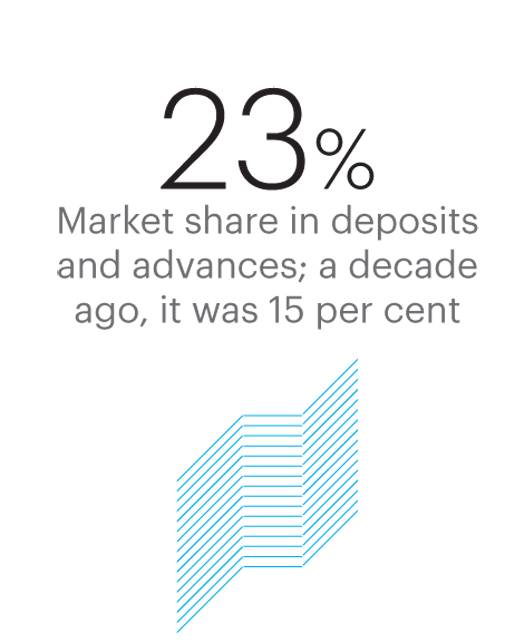 The bank's subsidiaries in life/general insurance, credit card, mutual fund, securities, etc, have rapidly scaled up over the years. It is now focusing on two areas - unlocking their value and increasing cross-selling opportunities to earn more fee income. The life insurance subsidiary, SBI Life, is listed on bourses with the bank's 57.6 per cent stake valued around Rs 55,000 crore. SBI Cards, the credit card subsidiary, will tap the market in March with a likely valuation of Rs 60,000-70,000 crore-plus. There are plans afoot to unlock the value in other subsidiaries too. "As soon as our subsidiaries reach a certain level of business, we will unlock their value. We will look at our mutual fund and general insurance businesses for taking them to the market in the next couple of years," says Kumar.

SBI has also made plans for cross-selling among parent and subsidiaries. Millions of customers are eligible to buy mutual fund and insurance products.

Similarly, customers of these subsidiaries can apply for home/auto loan loans from SBI branches. The bank is already using technological tools like data analytics, artificial intelligence and machine learning for lead generation. The employees are also getting trained to handle investment-related queries. "We call it customer value add (and not cross-selling). We want to operate as a financial supermarket to meet all your requirements," says Kumar, adding, "We have a strong brand and product basket." Not to forget scale and size as well.