It All Ads Up 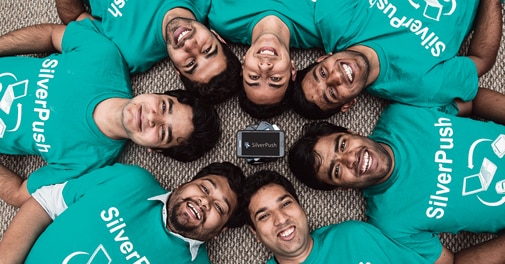 You may have seen an ad follow you from one website to another. For example, if you browsed shoes on a website on your computer, then hopped over to another site, the shoes you looked at earlier may show up in an ad on the second site. In the world of digital advertising, that is known as re-targeting. It works by dropping cookies (software code) on your browser to track what websites you visit, and uses the data to help advertisers follow you. Now, if you see the same ad on your mobile browser too, it's not just coincidence. This is cross-device retargeting, and the technology behind it solves a big problem advertisers face: how to track users as they increasingly access the Internet on multiple devices throughout the day. "For advertisers, the boundaries between mobile and PC have started to disappear," says Manish Vij, Founder and CEO of digital media network Smile Vun Group.

SilverPush, a start-up based in Gurgaon, near Delhi, and Mountain View, California, is among the few companies in the world that are trying to perfect cross-device retargeting with proprietary technology. Others like it include Tapad and Drawbridge, both US-based and both founded in 2010.

Data on desktop and mobile usage patterns are matched up to build a profile of the individual user. The profile is then used to serve advertisements to the user based on her or his previous purchases. Data includes gender, age, the products that interest the user, when she or he likes to search or shop, and location. SilverPush has created profiles of around 300 million mobile phones and tablets across the US and India. These are based on data collected from advertising exchanges such as US- and Pune-based Pubmatic, and US-based Smaato, real-time bidding platforms that help companies maximise ad revenues. Data is also collected from data management platforms such as Lotame and BlueKai, which provide data to marketers.

But the real task is to analyse the data and identify common users across desktops and mobile devices. SilverPush says it uses proprietary algorithms to pair devices and serve ads. "We are able to match 70 to 80 per cent of desktop users to their mobile phones," says Mudit Seth, Chief Marketing Officer (CMO) and co-founder of SilverPush, which launched cross-device campaigns in early April. "The target is to get active usage of their mobile apps and mobile websites, since re-targeting also helps revive applications that have been downloaded but are not used often."

After working with 20-odd companies in India (including Domino's India, Airtel and Aircel) and the US (such as Toyota and Olay) on mobile re-targeting campaigns, SilverPush pivoted its technology to cross-device re-targeting a few months ago. It currently earns revenues of $40,000 (Rs 24 lakh) a month, through mobile website-to-app re-targeting.

The 12-person startup is expanding its sales team, which will be split between its India and US offices. It is reaching out directly to digital heads, CMOs and ad agencies for business. The sales pitch varies depending on the customer, and the promised outcome varies across campaigns. For example, for mobile apps, the goal is to increase user engagement and signups, while for an auto company, a promised outcome would be to increase test drives for new launches.

Research firm Gartner estimates that spending on global mobile advertising will reach $18 billion this year, up from the estimated $13.1 billion in 2013. The cross-device re-targeting market is expected to grow fast, too. Advertisers are now highly focused on returns on investment in their digital advertising budget, and cross-device technology promises far better returns than regular advertising campaigns, which cannot identify a user across devices. Tapad estimates that cross-screen campaigns produce 95 per cent brand recall, compared to just 55 per cent in TV-only ones. Cross-device campaigns, according to Tapad, could be worth $77 billion by 2018.

Siddharth Puri, CEO of Tyroo Media, an angel investor in SilverPush, says: "Re-targeting helps advertisers save money, and enables them to reach only a curated set of consumers who are already interested in the brand, rather than carpet-bombing everyone with the same ad." He adds that 10 per cent of global digital ad spending by online retailers and travels sites is for re-targeting in all forms - desktop, mobile and cross-device.

Some experts say mobile or cross-device re-targeting is still a small business, but it is hard to predict what could happen in the fast-changing digital marketing industry. "Cross-device could evolve into the biggest category as far as re-targeting is concerned," says Smile Vun's Vij. There are signs of large companies emerging in desktop-re-targeting. When Paris-based desktop re-targeting company Criteo raised a total of $280 million in an IPO last year, its valuation was $1.86 billion (current valuation: $1.67 billion). And Vizury, a fast-growing desktop re-targeting company based in Bangalore, has raised around $11 million from multiple investors, including Nokia Growth Partners and Inventus Capital Partners.

A growing market means there is room for several players. In India, there is still relatively little understanding of cross-screen technology, and many companies are wary of campaigns that involve tracking users' online behaviour. "Though some e-commerce companies are heavily investing in re-targeting, we are yet seeing if customers will like it or not. There are privacy issues," says Amarjit Singh Batra, CEO at classifieds site Olx.in.

However, SilverPush dismisses privacy concerns, saying the company does not get personal data in the form of email IDs or mobile numbers. CMO Seth says: "The data we get is only in encrypted form. Customers do have the choice to opt out of seeing advertisements, by clicking on a link embedded within the advertisements."

Since SilverPush is largely focused on the US re-targeting market, it faces stiff competition from the likes of Tapad and Drawbridge, which have already built scale and are growing fast. Tapad, who says its 2013 revenues were around $23 million, has so far raised $13 million from investors, and has implemented cross-screen campaigns for 200 of the Fortune 500 brands, including Dell, Audi and American Airlines. Close rival Drawbridge, which has raised a total of about $20.5 million investors including Sequoia Capital, has done more than 400 campaigns for clients in North America, Europe, China and Australia.

All re-targeting players have proprietary technology whose holy grail is to accurately identify the same user on multiple devices. Tapad, whose Device Graph technology processes billions of data points a month to identify a common user across devices, claims an 80 to 90 per cent accuracy rate.

It is yet unclear how effective SilverPush's technology is, but since re-targeting campaigns are strictly focused on guaranteeing returns for advertisers, improving clients' sales will be critical. Marketers are no longer satisfied with consumers clicking on ads. "We like to compare sales revenue generated after running the campaign and the investment in the campaign," says Harneet Singh Rajpal, Vice President - Marketing at Domino's India. The pizza company ran a couple of re-targeting campaigns with SilverPush, but backed off later because return on investment could not be established. That will be the challenge for Chawla, SilverPush's CEO.

Advertising giants such as Google are also testing the waters with cross-device re-targeting. Google is testing a technology for desktop-to-mobile re-targeting services to brands with more than 100,000 customers registered on their websites (including e-commerce companies). The technology, which could replace cookies, will allow advertisers to serve ads on mobile devices to people who have visited their websites at least once.

Why some entrepreneurs delay VC funding for their start-ups