SBI's first woman chairperson is ringing in change at the 208-year-old institution. 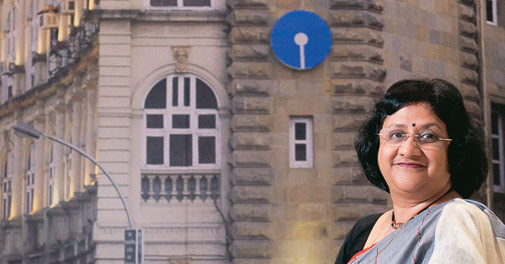 Changing times: SBI Chairman Arundhati Bhattacharya seated in front of a photograph of the old SBI corporate offi ce, circa 1971.

In the past two decades, the country's largest bank, State Bank of India (SBI), saw as many as 10 chairmen manning the bank at different points in time.

Only two-A.K. Purwar and O.P. Bhatt - were lucky to get more than four years in the hot seat. This has often prompted private sector bankers to joke that SBI is an elephant being pulled in different directions. And, certainly, most of the past chairmen have had different priorities.

Purwar, who took over the reins towards the end of 2002, was gung-ho on international expansion. He bought majority stakes in three mid-sized global banks in Mauritius, Indonesia and Kenya. Bhatt, his immediate successor, stormed the domestic market by scaling up the retail business.

Bhatt publically denounced the strategy of buying tiny global banks and put on hold Purwar's plans to buy a stake in a fourth foreign bank. Bhatt's successor Pratip Chaudhuri ,who took over in April 2011, criticised him for not making enough provisions for pension liability and bad debts.

"There was an elephant in the room. But we did not see it or chose not to see it," said Chaudhuri. The frequent changes in focus has meant constant tweaking of strategy. "Each of them have contributed to the bank's growth," defends Arundhati Bhattacharya, the first woman chairperson of the 208-year old bank.

Sitting at her 19th floor office in South Mumbai, Bhattacharya points out that the bank has maintained its leadership position in the market over the years.

"How many institutions have continued to persist ?" she says. SBI with an assets base of close to Rs 18 lakh crore today is almost three times bigger than the country's second-largest bank, ICICI Bank Ltd.

"If the past chairmen and the top management had not had the ability to envision what the future would be like, we would have become irrelevant a long time ago," says Bhattacharya , who is yet to move to her new renovated chairperson's office. The 58-year old, however, agrees that much cannot be done in a very short tenure. "It takes time for something to really filter down and start giving results," she says.

The government now seems keen to set the house of SBI in order. Bhattacharya's entry into the corner room has brought some firsts to the bank, often a victim of musical chairs at the top. For the first time, the bank is experimenting with a fixed tenure for the chairman - Bhattacharya has got a fixed three-year term.

"I have got six months more than my retirement date," explains Bhattacharya, the bank's 24th Chairperson. The previous United Progressive Alliance government has set a gradual road map for a fixed five-year tenure for the bank's chairman.

Bhattacharya's successor in October 2016 will get four years at the helm and all chairmen thereafter will get five years. The government has also allowed all the four managing directors (MDs) to be eligible for the post of chairman irrespective of the residual service. The MDs with less than two years of residual service were not allowed to become chairman earlier. Indeed, in the past, chairman has often come from the deputy managing director (DMD) level. For instance, Chaudhuri was promoted as chairman directly from the DMD level, while Bhattacharya herself was an MD for only two months.

The change in policy will have far reaching implications for the bank as both the chairman and four MDs work very closely in deciding the agenda of the bank. In fact, chairman and MDs are part of the board of directors. "The new change will see a seamless transfer of power," says Bhattacharya. Since a new chairman is likely to come from the MD level now it is likely that he will persist with the policies of his predecessor, she adds.

Bhattacharya's predecessor Chaudhuri received brickbats for deteriorating asset quality and falling profits. Net non-performing assets (NPAs) jumped from 1.63 per cent, when he took over in April 2011, to over two per cent by the time he demitted office in September 2013. The SBI stock crashed from Rs 2,800 levels to almost half at Rs 1,600 in the period. Nothing much has changed for the bank under Bhattacharya so far as the economic conditions remain challenging. Bhattacharya is not completely focused on 'tightening the belt' or consolidation. "You cannot stop thinking of the future while you are doing this (consolidation),"says Bhattacharya, who is completing a year at the top in September.

Bhattacharya has straightaway got down to the job of 'fixing the motor while it is running'. She has spelt out her agenda clearly by laying great emphasis on Information & Technology (IT). IT will be used in pricing of loan products, improving customer service and productivity and also minimisation of risk, according to Bhattacharya. It was during G.G. Vaidya's tenure that the bank began harnessing technology to streamline operations. In early 2000, the bank laid the foundation of core banking solution (CBS). A CBS allows customers to operate their bank account from anywhere and anytime. The actual implementation started in 2003 during Purwar's tenure and completed in July 2008 when Bhatt was the banks chairman.

SBI was already doing e-corners when Bhattacharya stepped into the chairperson's office. The e-corners actually offered 24x7 ATM service, passbook printing, fund transfers, etc., away from the branches. Bhattacharya came up with a bold initiative of introducing the next level of branch banking i.e digital banking. She soon put Sushil Kumar Mishra, DMD (corporate strategy and new business), in charge of the project. Kumar brought in global consulting firm Accenture on board to strategise digital banking plans.

In a digital branch, the bank offers instant account opening and quick loan approvals besides allowing expert advisors to talk to customers via video link. "It's is entirely immersive digital experience," says Bhattacharya. Finance Minister Arun Jaitley inaugurated the first of the six digital branches launched in the metros in July.

"These branches are a first step in the journey of offering full digital services across the nation," said Bhattacharya at the opening of the first digital branch. Bhattacharya is eyeing India's youth as future customers given that half of the country's population is under the age of 25. "This is a digital demographic, one that expects business to provide solutions immediately," said Bhattacharya. The challenge for SBI lies in executing its plans. So far it is a small initiative. "It is pushing SBI to embrace the new retail model of the new world," says Piyush Singh, Managing Director of Accenture's Financial Services Business in India.

Bhattacharya is not ignoring the new media or the social networking sites where youngsters spend maximum of their spare time. Two months after taking over, SBI launched a Facebook page followed by a YouTube channel in January this year. In April, SBI relaunched its Twitter handle.

Technology is not all about delivering banking services faster and more efficiently, but also helps in managing the business more efficiently. "I'm looking at bringing in a lot of technology in the areas of generating new business as well as improving the credit processes," says Bhattacharya. Thrust on data analytics - discovery and communication of meaningful patterns in data - is a key element of her strategy.

It helps in taking qualitative decisions, including business leads (generating new business from an existing customer), underwriting good clients and cross-selling savings, investment and loan products. Mohan Jayaraman, Country Manager of Experian Credit Information Company, a leading provider of data and analytical tools to financial institutions, says the PSU banks today are doing basic analytics. "The next step is advanced analytics and optimisation, which some private and foreign banks are doing," says Jayaraman.

It is on the priority list of Bhattacharya's agenda. "Our delivery standard is different in different places because it is very people dependent," says Bhattacharya who wants to bring uniformity in communication with customers. She has kickstarted a training programme for employees on dealing with customers.

The bank has also revamped its complaint management system. She is encouraging a culture of communication and participation right from the junior most employees. Some of the initiatives started by her includes encouraging senior employees to write blogs and making staff aware about where the bank is headed by sharing videos of analyst meetings. She has also revived a 100 days mass communication programme, last done in Bhatt's tenure, to update employees on the road ahead for the bank. A new order: SBI's digital branch in Mumbai with an interactive wall.
Bhattacharya has made the risk officer a member of all the credit committees. The enhanced focus on risk stemmed from the fact that the bank lent liberally during Bhatts tenure in the boom years of 2005 to 2008. It is now haunting them as economic stress is bringing in more NPAs. SBI's net NPAs at 2.57 per cent by March 2014 are among the highest in the industry. Bhattacharya has underscored that containing NPAs was her top priority. Agriculture and SME sectors were big contributors to NPAs.

Bhattacharya has already initiated the process of revamping some agricultural loan products. "It is more a question of education and extension of other banking services in rural areas apart from just giving loans," says Bhattacharya. As part of this strategy, SBI brought in RML Information, a personalised agriculture information provider, in July for providing agri information to its 12 million agri customers. This partner will provide mobile based services on weather, input prices, crop diseases, etc. Bhattacharya has also set up teams with officials trained to restructure SME accounts.

She is also considering hiring turnaround specialists to monitor and work with the bank in restructuring loans. In fact, SBI along with other consortium lenders appointed Alvarez & Marsal in February this year to work with Gujarat-based Sai Info System which defaulted on its loans.

Bhattacharya admits that the bank has engaged the services of outside consultants in a couple of restructuring cases. "We will do it as and when it is necessary and required," she said.

"The stress will go only if GDP growth picks up and demand goes up," she adds. SBI is working on a new approach to credit appraisal. "We are already working on early warning systems to capture the stress in corporate accounts early," says Bhattacharya.

Bhattacharya is going at a brisk pace to pack in as much she can in her three years tenure. Two more years are left now. One long pending issue is the merger of five associate banks with the parent. So far, it has succeeded in merging two - State Bank of Saurashtra in 2008 and State Bank of Indore last year. SBI will also have to reduce its operational costs to shore up its return on equity and return on assets.

Indeed, shareholders and investors of SBI would follow the initiatives of Bhattacharya, and their impact on the ground, closely over the next couple of years.