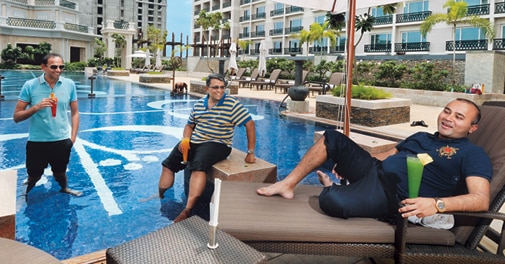 Pankaj Gupta loved his annual vacation. The Bangalore-based businessman's favourite destination was the Nilgiri hills on the Karnataka-Tamil Nadu border. In 1996, when he heard of the concept of timeshare vacations, pioneered in India by Sterling Holiday Resorts Ltd, he bought into it. He paid close to Rs 1 lakh, which allowed him a week each year in any of Sterling's 11 resorts in the country, for the next 25 years. For him, the added attraction was that Sterling had two resorts in Ooty - Fern Hill and Elk Hill. But his first timeshare holiday in the summer of 1997 was a nightmare. One look at the rooms in both resorts, and his family refused to stay there. From then on, he avoided using his timeshare. Like Gupta, some 86,000 members lost faith in the company. Sixteen years on, Sterling is fighting hard to regain it.

Started in 1987 by R. Subramanian, Sterling enjoyed smooth sailing in its early years. By March 1996, it was selling 4,500 timeshare accounts a month through its 60 sales offices nationwide. It had 12 resorts - with a total of 1,100 rooms - and occupancy was a healthy 65 per cent. Using surplus cash, the company built up a land bank of 175 acres in top tourist destinations. "Vacation timeshare is a cash flow positive business model, where members pay up-front for holidays for 25 years," says Ramesh Ramanathan, who was vice-president of marketing and sales during his first stint in the company, from 1991 to 1996. He rejoined the company as Managing Director in 2011. "In 1996, we were generating a cash flow of Rs 500 crore a year through timeshare sales."

Healthy cash flows tend to feed outsized ambitions, and Sterling, too, fell prey to that temptation. It embarked on a Rs 500 crore fivestar resort project with two 16-hole golf courses in Noida, near Delhi. It leased 420 acres of land from the Greater Noida Development Authority in 1994/95 for Rs 100 crore. Famous golfer Greg Norman was appointed to develop it, for a fee of $2 million. The grass for the entire course was imported.

But in 1996, the market began to tank. India saw an explosion in the demand for white goods, triggered by the entry of multinational manufacturers.

"From being cash-rich, we began to borrow to fund the Noida project and run our resorts. By March 2007, we had debt of Rs 200 crore," he adds. Things got worse. The company cut its marketing spending and closed all sales offices except in Mumbai. This hurt sales further, and they plummeted to five a month. Resort maintenance began to suffer. Occupancy levels fell, and members stopped paying annual amenities charges and maintenance fees. The company began to default on payments to the Greater Noida Development Authority, banks, creditors and suppliers.

In 2000, the Greater Noida Development Authority cancelled the land allotment. Sterling lost everything it had invested in the project (one of the two golf courses was ready in 1999). Legal challenges started to mount. Irate members hauled the company to consumer courts, saying it had failed to develop resorts as promised. Sterling faced 70 cases under the Negotiable Instruments Act for cheque dishonour. Banks filed as many as 15 winding-up petitions. Some dragged the company to the Debt Recovery Tribunal. "We had to appear in court and at the police station every other day," says Mohan. He left Sterling in 2000 as he could not handle the pressure (he returned to the company in 2005). Its share price crashed to its lowest level of Rs 1.55 in September 2001.

Founder R. Subramanian's attempts to sell assets, raise equity and reduce debts failed. He even let his company be run by Days Inn - an international hospitality chain - for two years. Nothing worked. In late 2006, he convinced his son Sidharth Subramanian, who ran an electronic medical records company in the US, to return to India and take charge of the company.

"We had 12 bankers, and large unpaid dues to each of them," says the junior Subramanian, who became vice chairman of the company. "We sold some assets, including our Goa resort and office property in Chennai. We used that money to pay off banks that had initiated winding-up petitions, and other creditors." Simultaneously, he started talking to private equity players. "We needed more funds to turn around the company, and private equity with a longer investment horizon was the best available option," he adds.

Click here to Enlarge
Siddharth Mehta, who runs Bay Capital Investment Ltd, took a 35 per cent stake in Sterling Holiday Resorts in 2009 and became its Chairman. "Sterling has an interesting portfolio of assets in great locales, and the domestic tourism sector is under-penetrated in India. I see an opportunity there," says Mehta.

The Rs 50 crore he brought into the company was used to settle remaining debts. By 2010/11, Sterling was almost a zero-debt company, with most legal issues resolved and its focus shifted to operational turnaround. Siddharth and Vice Chairman Subramanian reached out to Ramanathan, who had launched Club Mahindra after leaving Sterling in 1996 and, as its CEO, made it the market leader. He had quit Club Mahindra earlier in 2011.

What he saw on his return stumped him. "There was no sales organisation, no marketing set-up, no banker, an outdated IT system that ran on Sybase, occupancy levels of just 11 per cent, no presence in digital media and, most worryingly, an organisation that exhibited a total lack of energy," he says.

To infuse energy into the company, he drew up a mission statement seeking to make it the market leader again. He also devised a strategy to rebuild credibility and customer confidence, and increase cash flow.

In October 2011, investors Rakesh Jhunjhunwala and Radhakrishnan Damani each took a seven per cent stake in the company. Ramanathan used the money to renovate resorts and re-establish credibility among members. "We spent Rs 95 crore to renovate rooms and common areas," he says. Today, 466 of the 1,109 rooms the company owns are renovated. The rest will be completed in 2014/15.

Ramanathan began to take new resorts on lease in locations such as Goa, Thekkady in Kerala, Corbett National Park in Uttarakhand, Gangtok in Sikkim, Karwar in coastal Karnataka, and Dharamsala in Himachal Pradesh, even though the company's occupancy levels were low then, so that members could have better options. This added 541 rooms, taking the total room tally to 1,650, with 21 resorts in 19 destinations. A 50-seat call centre was started and a new information and communication technology backbone was implemented. "We wanted to ensure that from reservation to the experience at the resorts, customers were satisfied," he says. A strong social media strategy was drawn up, and human resources given top priority.

On the financial side, efforts were made to increase revenues by adding new members, focusing on nonmember business by starting a hotel sales division, and offering a wide range of food and beverages options at resorts. Simultaneously, expenses were attacked.

In 2011, Sterling had no marketing set-up, no banker, an outdated IT system, no digital presence, and 11% occupancy

Many old customers have started holidaying with Sterling again. The company is cash flow-positive, and losses have shrunk from Rs 41.31 crore in 2011/12 to Rs 20.2 crore in 2012/13. The company hopes to make a profit in the current year. The stock market has responded, and the company's stock trades at around Rs 65 a share.

"The revival at Sterling is interesting," says Kaushik Vardharajan, Managing Director at HVS South Asia, a hotel consultancy company. "But they need to keep the member-to-room ratio at a level that will offer customers the flexibility to choose their holiday destination. To keep customer satisfaction levels high, Sterling needs to keep adding more resorts, and preferably lease them." As far as expansion is concerned, Sterling is sitting pretty, as its land bank - now 150 acres - gives it the potential to add 2,000 rooms at a low capital cost.

After 16 years, Gupta and his family returned to stay at the Fern Hill resort in Ooty this April. They were in for a pleasant surprise. "The rooms were great, and so was the service," he says. "We thoroughly enjoyed our stay. We are looking forward to our next holiday." That should be music to the ears of Sterling's management team.

British Airways, Virgin Atlantic battle it out in India