Jaypee Sports has spent $400 million on the Buddh circuit, including a licence fee of $30-35 million. Around 90,000 people showed up to watch the race last year, but that may be difficult this season, with less than a third of the 100,000 tickets sold.

All Set: Sameer Gaur, MD and CEO of Jaypee Sports International Limited, which hosts the Indian Grand Prix (Photo: Shekhar Ghosh)
A sharp left turn, his final one that day, and Red Bull Racing's Sebastian Vettel was zipping past the chequered flag waved by cricketer Sachin Tendulkar. It was October 30, 2011. Vettel, who had bagged the overall Formula One racing drivers' championship a couple of races earlier, had just won the inaugural Indian Grand Prix (GP). He completed the 60-lap race, covering a total distance of 307.2 kilometres, in one hour, 30 minutes and 35 seconds.

The German driver was not the only one celebrating that afternoon at the Buddh International circuit in Greater Noida, Uttar Pradesh. The race was also a victory for Jaypee Sports International (JPSI), which was responsible for bringing F1 racing into India.

The event was almost a sellout - Jaypee Sports raked in Rs 100 crore from ticket sales. It also earned a significant sum through sponsorship revenues, those are shared with Formula One Management (FOM), which manages the commercial operations of F1 racing. Jaypee Sports was not willing to reveal details of those revenues.

In pics: India's F1 circuit opened
This year, the race for the drivers' crown is still open, with only four races left in the season, including the Indian GP. Vettel is once more on top of the standings, having overtaken Ferrari's Fernando Alonso in the previous race, in Yeongam, Korea. On October 28, when the five red lights go off at 3 pm, signalling the start of the second Indian GP, Vettel will try to repeat his performance of last year and extend his six-point lead over Alonso. 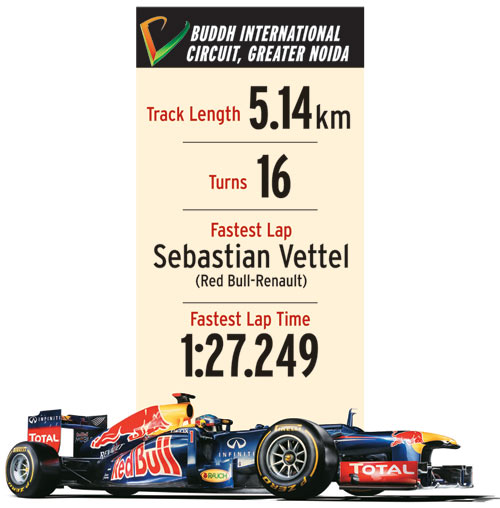 Jaypee Sports, too, will try to repeat its performance of last year, when 90,000 people showed up at the Buddh circuit to watch the race. That may be difficult this season, with less than a third of the 100,000 tickets sold.

"The euphoria is lower. There is always a dip in the second year. The real test will be in the third and fourth year," says Sameer Gaur, MD and CEO, Jaypee Sports International Limited. "We have sold around 30,000 tickets (as of October 16)."

But the tepid sales are a worry, given that prices have been slashed. The most expensive ticket (excluding the Paddock Club, which is mostly for VVIPs) has been priced at Rs 21,000 compared to Rs 35,000 last year.

The F1 racing event takes place over three days at every venue. The first day is for practice. On the second day, time trials are held to determine the order of the cars on the grid. The race itself takes place on the third day. Last year, Jaypee Sports sold a single ticket for all the three days. "This time there are single race-day tickets as well," says Ashish Hemrajani, Founder and CEO of Big Tree Entertainment, which is the event's ticket sales partner through its website Bookmyshow. com. "It is still a new sport in India. Unless you widen the net, you can't reach the grassroots, and return on investment will take time," he adds.

Indeed, Jaypee Sports, which was hoping to break even in the third year, may now take five. The company spent $400 million on the Buddh circuit, including a licence fee of $30-35 million. It has to pay the licence fee to FOM every year for five years, the duration of their contract. The amount will increase by 10 per cent annually on a compounding basis.

"India is a last-minute market," says Shashank Shekhar, AVP, TUI India, the authorised ticket distributor for the Formula One Paddock Club. "We are seeing a good response from corporates, too." The Paddock Club is Formula One's premium hospitality service, with tickets priced at $5,400 for two days and $5,900 for three. The package includes prime viewing positions, VIP parking, pitlane tours, gourmet cuisine, and an open bar. Click here to Enlarge
The Indian GP is expected to attract good viewership ratings on television. "Last year, with an overall reach of 32.7 million, there was a 28 per cent spurt in F1's reach compared to 2010. That increase primarily came from the introduction of the Indian GP," says Sanjay Kailash, Executive Vice President, ESPN Software India Pvt Ltd.

This year's race will be broadcast by ESPN HD and Star Sports.

Other sectors are also reaping benefits from the Indian GP. Real estate prices in Greater Noida have risen since the F1 circuit came up there. According to real estate consultant Jones Lang LaSalle India, apartment prices in the area rose from Rs 3,000 to 4,000 per square foot in 2010 to Rs 3,800-5,500 in 2011.

"Greater Noida was a bit too far, as far as investors were concerned. The successful hosting of the race and the buzz around F1 has resulted in a sudden increase in projects," says Rohan Sharma, Senior Manager - Research and Real Estate Intelligence Service, Jones Lang LaSalle India.

The hospitality sector appears to be benefiting as well. "We have seen additional demand for rooms over last year. Our Double Tree and Hilton hotels are currently sold out during the race period," says Scott Thomson, General Manager, Hilton and Double Tree by Hilton.

Meanwhile, preparations for the race are on in full swing. The logistics of moving F1 cargo from one country to another are almost like a military operation (see Globetrotters). "Because of their tight schedule, everything has to be smooth otherwise there will be anarchy," says R. S. Subramanian, Country Manager, India, DHL Express. Sougoto Das, Head of logistics at BIC, says that 58 containers of cargo had reached India by sea, as of October 15.

So, who will take the podium on October 28?

While Vettel and Alonso will be trying to outdo each other, Narain Karthikeyan, the only Indian driver, will be hoping to prove a point or two. "This time the race is wide open. I want to better my performance of last year (17th position)," says Karthikeyan, who drives for the HRT-Cosworth team.