Exporters fear they will be hit hard by the slowdown

Global economic woes have finally begun to shadow the best performing of India's macroeconomic indicators - exports. BT spoke to more than 50 small and medium exporters, industry associations and policymakers - to find that almost all of them were fatalistically waiting to be hit hard by the slowdown.

Handicrafts have suffered due to poor branding
Shweta Punj
Rakesh Shah, an exporter of engineering products, has been on a roll the last two years. His company, Nipha Enterprises reported a 30 per cent growth in revenues in 2010/11 from the year before. This financial year, his order book was full up till September.

But, starting October, he is uncertain about taking further orders, and is only making short-term commitments. He fears a repeat of the 2008 slowdown. "Then, I barely covered a part of my variable cost and worked with a 60 per cent workforce... That's what I am preparing for now," says Shah, a former chairman of the Engineering Export Promotion Council, or EEPC, an exports trade body.

Click here to Enlarge
Despite a healthy start - 44 per cent from the year-ago period - in the first five months of this financial year, Kolkata-based Shah expects Nipha's exports to end 2011/12 with just 25 per cent growth from last year.

Hang on. Exports are booming in India, aren't they? It is the brightest of India's macroeconomic indicators today, expanding at a record 44 per cent year-on-year for August, to touch $24 billion, or nearly Rs 1.2 trillion (one trillion equals 100,000 crore). As a percentage of gross domestic product, or GDP, exports grew to 22 per cent in 2010/11 from 14 per cent a decade ago. For the first time ever, exports crossed the $250 billion mark last fiscal year.

I don't go to the US, London, Canada anymore. I go to Bogota, Rio, Sao Paulo, Mexico City: Rahul Khullar
Against this, other economic indicators are dismal. The International Monetary Fund, or IMF, recently scaled down its estimates for India's GDP growth in the current year to 7.8 per cent. In July, the government announced a growth in factory output of 3.3 per cent, the lowest in 21 months. And inflation is hovering near double digits.

SPECIAL: How to do business in a slowing economy

Still, voices like that of Shah are growing. The trend has not been captured in headline numbers yet, but almost all exporters, especially the small and medium ones who form the backbone of Indian exports, are scrambling for cover.

Rahul Khullar, the straight-talking Union Commerce Secretary, advises Business Today "not to fall for the crocodile tears" of most exporters. "They are always crying," he says, pointing to a string of numbers. Exports have grown from $126 billion in 2006/07 to $254 billion last fiscal year. In January to March 2011, Indian exports grew 62 per cent - the fastest export growth among major economies and nearly double the expansion in China's exports.

Yet the robust data cloaks growing anxiety within the government about exports. India's current account deficit, essentially the excess of imports over exports, reached $14.1 billion for the April-June quarter, higher by 18 per cent over the previous year. A look at sequential, or quarter-on-quarter data, reveals what annual comparisons hide. In the April-June quarter, Indian exports were $128 billion, around the same as they were in the preceding quarter.

The world has become uncertain. We must be vigilant and assist our exporters: Jyotiraditya Scindia
Global economic woes may have finally begun to shadow the best performing of India's macroeconomic indicators.

Winter of discontent
BT spoke to more than 50 small and medium exporters, industry associations and policymakers - to find that almost all of them were fatalistically waiting to be hit hard by the global slowdown.

In the industrial belt of Noida in the National Capital Region, stands Jade Filagree. Brightly sequinned and embroidered dresses line the white walls of its 12,000 square feet factory, in which 100-odd workers cut, sew and embroider dresses and blouses for buyers in a host of countries around the world. Exports from units such as Jade Filagree make up nine per cent of India's exports, amounting to $23.3 billion.

Click here to Enlarge
Harmeet Bajaj, who set up Jade Filagree two decades ago, is stoic. "India is still a low-cost manufacturing base," she says. "We are still doing $1 to $5 pieces; $20-$25 pieces are unheard of." And, not just are profits eroding as costs spiral up, her outlook for revenues is not rosy. The competition is growing: apart from China, East Europe is also becoming a rival, she says. Italy, which had lost business due to high costs, is making a comeback. Turkey and Romania have emerged as manufacturing bases for high cost and quality products.

"India has not been able to do that," Bajaj says, implying India should not expect much growth in textile exports. Bajaj, who contemplated shutting shop "quite seriously" during the 2008 crisis, is now looking at the domestic market, as well as at expanding her business in new markets overseas - West Asia, Europe, and Australia. She has to since clients in traditional markets are not willing to shell out more money. "A client who was paying $50 in 2001 still wants the same product for $50," she says.

If the Commerce Secretary's travel itinerary of the last year and a half is anything to go by, he has seen this coming. "I have a simple agenda: I am looking at establishing markets in Latin America, Africa, the ASEAN countries. I don't go to US, London, Canada any more. I go to Bogota, Rio, Sao Paulo, Mexico City," says Khullar, who has made 17 trips across the globe in the last 18 months to boost trade ties. 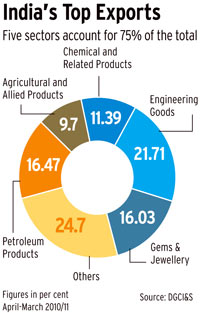 For Roop Narayan Sharma, owner of Shree R.N. Metals, whose factory is in rural Rajasthan, exporting this year is just out of the question. Sharma exports steel balls and castings to Britain, some African countries and Dubai. This year, he says, clients are not willing to make advance payments, without which it is near impossible to run his business. Input costs for most products have shot up - on an average, world commodity prices increased by 24 per cent in 2010/11, with metals leading energy and food. Sharma hopes to make good with domestic clients, primarily government-owned companies.

That is bad news for India's external sector. R.N. Metals and other exporters of engineering products have been key drivers of the export story - engineering exports grew 81 per cent in 2010/11 to $68.8 billion. After engineering firms, oil refiners exporting petroleum products, and companies in the global value supply chain of gems and jewellery have provided the springboard for Indian exports. 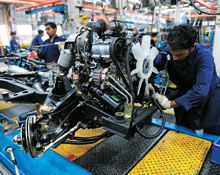 Engineering exports grew 81 per cent in 2010/11 but is dealing with slowing demand
There are some in the exporter community who are clear that India's exports are stalling. Ramu Deora, a veteran exporter, president of the Federation of Indian Exporters Organisations and younger brother of Congress member of Parliament, Murli Deora, expects the worst. "Till September, it was still tolerable but the trade figures with effect from October will witness an unimaginable slowdown," he says. Against $246 billion in 2010/11, his estimate for exports in 2011/12 is $280 billion.

Gautam Maini, Managing Director at Maini Precision Products, a maker of components for automotive and aerospace sectors, is hedging his bets from six years ago. "From 1982 to 2004, 90 per cent of our components were exported," he says. The company decided to move more aggressively into the premium end of the domestic market after the 2008 global crisis. Today, only half of Maini's business comes from exports.

If Maini is hedging his bets, there are others who have simply moved out of exports. It is not just because of the global slowdown: the domestic environment makes it difficult to compete globally. Deepak Whorra of Whorra Enterprises is one such. He began exporting silver handicrafts three decades ago, finding markets in the us, East Europe and West Asia. But the crisis of 2008 convinced him to quit exports altogether. "Our products were not competitive because of too many taxes, no matter what they [government] say they will refund.

One customer asked me: 'Are you exporting a product or taxes?'," he says. Infrastructure issues, hurdles in the interstate movement of goods, and multiple layers of taxes were other challenges. Most products attract excise duty, and the service tax levied at various stages is not refunded.

Slowdown-hit buyers
Adding to these woes are sluggish economies in the West. "The global economy has entered a dangerous new phase," IMF's economic counsellor Olivier Blanchard said on September 20, before marking down the global growth forecast for 2011/12 to four per cent from the 4.5 per cent he had given five months before.

A client who was willing to pay Dollar 50 in 2001 still wants the same product for Dollar 50: Harmeet Bajaj
Exporters are feeling the pain of the slowdown. Sanjay Budhia, Managing Director of export house Patton International and Chairman of the Confederation of Indian Industry's national committee on exports and imports, says: "Orders are shrinking because of global economic problem."

Nearly half of Patton's turnover of around Rs 450 crore comes from exports of electrical conduits, pipe fittings and precision fasteners. "I am working on single digit profits," says Budhia. "Today if I want to make a quotation, I am not sure what price to quote." His worry is the order book for 2012/13. (Orders for the current year were booked last year.) "What we are seeing is 10 to 15 per cent growth. It might not translate into value, because I have to bring my prices down," he adds.
Even Khullar admits he is not expecting too much. "This year, if we can do $135 billion of exports in the next seven months, and we close at $270 billion, I am happy," he says. That is single digit growth, after last year's 42 per cent rise.

His boss and Minister of State for Commerce and Industry Jyotiraditya Scindia is more sanguine. "There is an opportunity when markets become cost sensitive - it can swing both ways. We must be vigilant and we must assist our exporters."

The impact of slowing exports is grim. A May 2011 commerce ministry strategy paper had highlighted the unsustainable nature of India's trade balance. If exports are not doubled in three years India could end up with a trade deficit of 10.5 to 11.5 per cent of GDP, which is deemed unsustainable.

As Khullar puts it: "The world is changing, if you don't wake up to this reality, you are dead."