Last year, ABB raised its stake in ABB India from 52.11 per cent to 75 per cent, by buying back shares for $1 billion from investors. The company is pushing technology to India like never before with an eye on pumping up its $1.3 bn local sales.

ABB Global CEO Joseph Hogan (Photos: Vivan Mehra)
K.R. Balasubramanyam
A 220-kV substation of GMR Energy at Kakinada to transfer power from its bargemounted power plant off the Andhra Pradesh coast posed a problem for the power developer. The installation would take up to six acres of space, which the company did not have. The answer to the problem came in a new technology that shoe-horned switchgear in a compact package called Plug and Switch System. PASS, as the system was called in short, could save 28 per cent on space, compared to conventional technology.

"PASS is ideal for urban areas, where space is a problem," says Bazmi Husain, Country Manager and Managing Director of ABB India, which built the substation.

ABB India has buy-in from companies such as Tata Power. It has bought 25 PASS modules from ABB India to increase the capacity of its substations in Mumbai. PASS, pioneered by ABB India's Swiss-Swedish parent, ABB, costs two to 2.5 times what a conventional substation would. But it is quick to set up, easy to maintain, and can take additional feeders, says N. Venu, head of ABB India's power systems division. 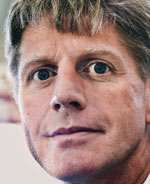 We want to be as close to our customer as possible: Joseph Hogan
The cost could go down in the coming years if ABB India's plans to have its Vadodara plant making its own version of PASS takes off soon. Husain says this is part of Zurich-headquartered ABB's plan to transfer more knowledge and capabilities to its Indian subsidiary. "Sixty per cent of our global research and development in control systems happens in India, up from zero per cent a decade ago," he says.

ABB's Global Corporate Research Centre in Bangalore - its largest worldwide - alone accounts for 30 per cent of its R&D in process automation. The biggest investment that ABB's global $4-billion (nearly Rs 20,000-crore) low-voltage products division is making this year is a new $24-million unit coming up in the southern city. It will make a range of products, including circuit breakers and surge protectors.

"Over the last four years, we have invested $250 million in India," says Husain. "But you cannot put a value to the enormous amount of knowledge ABB has transferred to India." The $32-billion ABB gets royalties from its Indian unit for technologies it transfers. Besides the R&D centres in Bangalore and Chennai, ABB India has 14 factories in five states, with specialities ranging from motors to wind generators to transformer insulation.

Click here to Enlarge
Tarak Mehta, the global head of ABB's low-voltage products division, says: "We will introduce about 10 product lines in the next 18 months, and aim for 30 per cent growth a year in India." In September, ABB India launched switchgear called SafeLink CB, designed and developed by ABB India in Nashik, Maharashtra.

Last year, ABB raised its stake in ABB India from 52.11 per cent to 75 per cent, by buying back shares for $1 billion from investors, to tighten its grip in India (German rival Siemens AG, too, has a 75 per cent stake in its listed Indian subsidiary, Siemens). "We are not in India for labour arbitrage, but to be more competitive in the Indian and global markets," says Joseph Hogan, CEO, ABB Group (see interview). 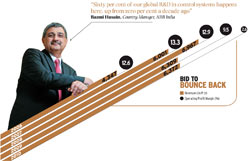 Click here to Enlarge
Recently, the group won a contract for an ultra high-voltage direct current (HVDC) link between Assam and Uttar Pradesh, to transport surplus power. The 1,728-km line is a $900-million deal for ABB, and its Indian subsidiary's share is $130 million. "What is important beyond these numbers is that most of the engineering for this will be done in India," says Husain. "Outside of Ludvika, Sweden, Chennai is the only place where we have engineering capability for HVDC systems."

The local expertise is beginning to be felt on the business. From Vadodara, ABB India is preparing to dispatch seven giant transformers capable of handling 765 kV each to the Power Grid Corporation of India. When it supplied them before, they were imported. ABB and peers such as Siemens and Schneider lost out last year, when Korean and Chinese rivals walked away with the bulk of Power Grid's orders for 765-kV transformers. Shifting design and manufacturing to India allowed ABB to lower its quote to $2 million apiece, from $4 million two years ago, beating Asian rivals.

Aloke Mukherjea, Advisor, Ernst & Young India, and a former director at ABB India, says: "ABB believes it cannot control technology from one centre and expect subsidiaries to do well." He adds that India has been successful at absorbing the technology, and ABB has fared better with this strategy than others who have adopted it.

ABB's India business went through a bad patch last year (the group follows the calendar year) because of price erosion and competition. The decision in 2004 to be a turnkey contractor in the Rajiv Gandhi Grameen Vidyutikaran Yojana, a rural electrification scheme that the central government is implementing with the help of the private sector, did not turn out well for the company either.

"We exited because we realised rural electrification is not close to our strengths," says Husain. His colleague Venu adds that ABB India still serves the rural market by selling products through contractors. The ambitious capital expenditure projections for the power sector in the 12th five-year plan, beginning next April, have spurred ABB India to step up localisation. Group CEO Hogan says India consumes 0.79 units of energy to generate $1 of gross domestic product; the world average is 0.45. Increasing energy efficiency is not only critical to India's success, it also presents ABB with a big opportunity.

Krishnakant Thakur, analyst at Portuguese bank Espirito Santo, says most customers have low awareness about reducing costs through automation. "But ABB is investing in India, and introducing new automation products. Even if they are slightly expensive, they are trying to create a market for them."