In India's rapidly growing BPO industry, Aegis and Minacs are outliers; very different from new-age start-ups seeded by professionals, such as WNS, or outsourcing units spun off from multinationals. Aegis and Minacs, by contrast, come from old world business groups which have made their millions in businesses such as cement, steel, petroleum and aluminium, among others.

Aparup Sengupta, MD & Global CEO, Aegis
Geetanjali Shukla
A post-lunch slowing of biorhythms is sweeping through call-centre country Gurgaon and the performance on a floor full of agents working on a large Indian mobile phone company's account is faltering. The slowdown is spotted some 1,400 km away at Aegis's grandiosely-named Global Command Centre, or GCC, in Mumbai. The analyst, who notices the falling metrics, reaches for the phone, flagging it to the Gurgaon call centre's head with a solution: cut down on breaks later that afternoon to bring back service levels to an even keel.

Sure, there would have been some tight bladders on the post-lunch shift, but the remote sensing ability of Aegis's so-called GCC is the next generation of outsourcing, says Aparup Sengupta, the company's Managing Director and Global CEO. "It will improve consumer experiences and in the process help companies perform better," he says.

Systems like the GCC (it cost $10 million to put up), a focus on consultancy, and its investment in training will propel growth for the emerging star in the steel-tooil Essar group of companies, says Sengupta. For a company that has made 18 acquisitions in seven years, Aegis is focused on squeezing growth through consolidating its spread. "We crossed $700 million of revenue this year. By March 2012, we want to cross the magic $1 billion mark, and this growth will be organic," says Sengupta. India's total business process outsourcing, or BPO, services revenue was around $17 billion in 2010/11. 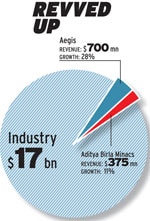 Halfway across the world, another BPO unit from an old economy Indian conglomerate is also pushing the envelope. Toronto, Canada-based Deepak Patel, CEO, Aditya Birla Minacs, is busy expanding beyond plain vanilla outsourcing to high-tech consulting. "It's a domain, domain, domain game now! The earlier model of Indian outsourcing was based on labour arbitrage, but that alone is not enough now," says Patel. Companies are outsourcing even what used to be considered "core" work some years ago. For example, credit card issuers earlier would not outsource fraud detection and forensics work; today, they are.

To address opportunities like this, Minacs - as the BPO unit of the $35-billion Aditya Birla conglomerate is commonly called - has a new go-to-market approach in place, which has the company proactively presenting proposals to clients rather than merely responding to request for proposals, or RFPs, floated by outsourcers. "This happens more with existing customers, is more expensive than traditional methods, but works better in sales conversion than the traditional method of responding to RFPs," says Patel. "If you get up the value chain, the margins are higher, the business is stickier, and relationships with your partners are more respectful."

Earlier this year, for one of its unnamed North American customers, Minacs's executives visited 140 sites across the United States to understand closely the operations. "After six months of extensive touring, we put forward five proposals, each of which was tailor-made to meet their requirements. This changed the competitive landscape as nobody had the kind of insight that we did," he says. These steps are reflected in the company's revenues: $375 million in 2010/11, up from some $312 million the year before.

"There is a growing need for BPOs to use the data to drive certain business results aligned with their business processes," says Mayur Sahni, Senior Market Analyst, IDC Asia-Pacific.

{mosimage}In India's rapidly growing BPO industry, Aegis and Minacs are outliers; very different from new-age start-ups seeded by professionals, such as WNS, or outsourcing units spun off from multinationals (market leader Genpact, for instance). Aegis and Minacs, by contrast, come from old world business groups which have made their millions in businesses such as cement, steel, petroleum and aluminium, among others. The closest business to tech outsourcing services they have run is telecom.

While both the BPO firms claim that a small percentage - four per cent for Minacs and less than seven per cent for Aegis - of their business comes from their respective parent groups, there is no denying the benefits of being part of large conglomerates.

"For most BPO companies positioning is a mere brand statement. Aegis and Minacs have spent money in executing their brand positioning. They have been able to do so due to the backing of the large groups that they belong to," says a BPO industry insider.

{mosimage}It is perhaps such depth of support that allows Aegis and Minacs to absorb costs even if it lowers profitability. In June this year, rating agency Standard & Poor's expressed concerns over Aegis's 13 per cent operating margins - measured by earnings before interest, tax, depreciation and amortization, or EBITDA - being lower than its peers. The reason for this is its higher share of onsite delivery which piles up costs. Sengupta calls it cultural proximity to its customers. "An employee sitting in Bangalore may not be able to serve a platinum card customer from the US who lost his card skiing in Vermont," he says.

Minacs hired 30 senior domain specialists in 2009/10 - an expense that had not been budgeted for, but one which, Patel says, was critical to take the business forward. "If you are going to execute pieces of your client's business, you got to have people who are more talented than the ones your clients have." At Rs 35 crore in the April-June quarter this year, Minacs's EBITDA was flat from last year, but Patel puts it down to investments in ramping up to serve clients in the coming quarters.

Next, the Aditya Birla group plans to merge two information technology, or IT, subsidiaries into Minacs, a move lauded by an analyst. "There are two ways in which BPO vendors move up the value chain. One is by moving up within the BPO industry, where Indian vendors have been fairly successful. The other is by moving from BPO services to IT services. Indian BPO companies have been finding it difficult to achieve growth in IT services organically," says Ajay Srinivasan, Head, CRISIL Research. Over the years, Minacs and Aegis have built strong businesses. How valuable they turn out to be in the years ahead for the conglomerates they are a part of will be decided by how quickly they step out of their parents' benign shadows.