Afghanistan is sitting on an estimated $1 trillion of mineral wealth.  With the Afghan parliament expected to pass a new mining law soon, mining companies from Britain to China are making plans to unearth the country's massive mineral deposits after international combat troops pull out by the end of 2014.

It could be the Gold Rush of the 21st century - and India is leading the pack of investors lining up for a chunk of the treasure in the mountains of Afghanistan.

For months now, Afghanistan's Minister of Mines, Wahidullah Shahrani, has been travelling the world to attract investors to tap an estimated $1 trillion worth of minerals in the war-ravaged country.

His efforts may soon pay off. With the Afghan parliament expected to pass a new mining law soon, mining companies from Britain to China are making plans to unearth the country's massive mineral deposits - including gold, copper and iron ore - after international combat troops pull out by the end of 2014.

Shahrani says the new law, which has been approved by the cabinet, will bring the tender process in line with international norms. "It has really clear, strong provisions on transparency, on publication of contracts, involvement of the communities, and provides a lot of security and protection to investors by having the exploration and exploitation license awarded in a single contract to the same company," he said. "We did not have such a provision in the old mining law."

For India, the new law will open up untold opportunities. It will pave the way for a consortium led by Steel Authority of India Ltd (SAIL) to sign an $8-10 billion deal to develop four iron ore blocks and build a steel plant in Hajigak, 130 km west of Kabul in the central highlands of Bamiyan province. The Hajigak project has an estimated 1.8 billion tonnes of high grade ore. "The negotiations have been concluded and we are waiting for the new mining law, and with the approval of the new mining law, that contract is going to be awarded," Shahrani said. "It will be the largest ever economic project in the history of the country, which will involve the construction of the first ever steel plant in the country, and a railroad from the iron ore mine to the steel plant." Already, regional powerhouses are jockeying for influence in the country's post-war future. Along with multi-billion-dollar commitments from Indian and Chinese firms, some smaller companies are exploring for gold. China's $3-billion deal to develop copper at Mes Aynak, 40 km southeast of Kabul, was the first major deal in the sector when it was signed in 2008. Exploration work has not yet begun, but work has been complicated by the discovery of a 2,000-year-old complex of Buddhist monasteries.

The scale of the projects being bankrolled by New Delhi and Beijing hints at the long-term strategic objectives of the rival powers, tussling for influence in the country at the region's crossroads as it emerges from decades of war, poverty, aid dependence and, since 2001, Taliban insurgency and Western military presence. "India looks at Afghanistan as a strategic partner for its regional perspective, and building railways and other infrastructure through Afghanistan is probably something they want to do anyway," says Richard Williams, CEO of Afghan Gold and Minerals.

Industry experts say it will be many years before Afghanistan reaps sizeable returns from its mineral resources because of its lack of security, infrastructure, expertise, water and legal framework. Rather, the country will attract politically-motivated investment by foreign stateowned corporations snapping up huge contracts as their governments seek influence over Afghanistan's future once the Western military engagement ends. But the government is already chalking up plans for handing out contracts. Shahrani says he will be putting a lithium contract up for tender this year, but gives no details. 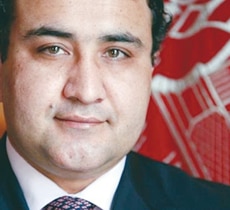 It will be the largest ever economic project in the history of the country, which will involve the construction of the fi rst ever steel plant: Wahidullah Shahrani
Afghan Gold and Minerals has many joint ventures and two 100 per cent Afghan companies providing mining services. The firm's first licence was to develop a gold mine on property owned by the family of Afghan partner Sadat Naderi, in Qara Zaghan. It also has concessions to explore for copper in Balkhab, in Sar-i-Pul and Balkh provinces, and Shaida in Herat; and for gold in Badakhshan in a joint venture with Turkish Afghan Mining Company, 51 per cent owned by Turkish silver mining company Eti Gumus.

Williams says the Russian surveys had shown one area of the Badakhshan project held 40,000 ounces of gold. "The area they focused on was very narrow and small, and it's our view that that particular deposit would certainly be 10 times as big as that in terms of the gold," he adds. The Balkhab copper deposit could be as high as 150 million tonnes and the company hoped to have a pilot plant operational within 12 to 18 months. "Which could mean that in election year here, presidential in 2014 or parliamentary in 2015, you could see Afghanistan exporting and selling copper concentrate," he says.

Analysts are not so optimistic that the country will be producing and exporting metal so soon, as the political, legal and security landscape will remain unstable for years to come.

CEO of Afghan Gold and Minerals

Peter Hickson, former head of global materials and commodities research for UBS and now an independent consultant, says he "worries about how much political hype has been imposed … for US domestic political purposes and the justification of military intervention, like weapons of mass destruction in Iraq". He adds that claims about Afghanistan's mineral riches could just as easily be a face-saving justification for the withdrawal of international military efforts and the likely scaling back of aid, while enabling the US and its allies to brush aside talk of defeat or retreat.