Why the upstart has won the admiration of even big rivals.

Agnello Dias (standing) and Santosh Padhi
Anusha Subramanian
The next time you catch yourself humming Airtel's latest jingle, thank Agnello Dias. He is the one who came up with the campaign line "Har ek friend zaroori hota hai", which Bollywood lyricist Amitabh Bhattacharya turned into the song that has caught the imagination of young consumers. The latest success of Mumbai-based advertising upstart Taproot India has won the admiration of even rival agencies. Founded just three years ago, Taproot, an independent creative agency that works with conventional and non-conventional media, has lost little time in bagging big clients and winning international awards.

Business Today caught up with Dias, better known to his friends as "Aggie", and his colleague Santosh Padhi, who goes by "Paddy" - the co-founders and Creative Directors of Taproot - in a suburban Mumbai studio crammed with huge lights and a handpainted jungle backdrop. They were on the set of a shoot for a print campaign for The Times of India. While Taproot's photographer Amol Jadhav set up his equipment, its co-founders got ready for a shoot for BT.

The Times of India, a leading national daily, was one of Taproot's earliest clients. Paddy is cagey about the concept of the latest campaign. Instead, he says: "The Times Group has more than 10 agencies working with it on different brands. We were lucky to get a huge chunk of the work, because Rahul Kansal and Priya Gupta of the group already knew our strengths." Aggie had worked on TOI campaigns during his three years at advertising giant JWT.

Today, Taproot is one of the country's most sought-after agencies, with an impressive client roster that includes the Cond Nast Group, Pepsi, and the UTV Group. Its awards include a gold and silver at the Cannes advertising festival last year. Taproot's co-founders are unwilling to discuss revenue or billing numbers. Aggie, a commerce graduate who became an ace copywriter almost by chance, says only that Taproot is growing "approximately 50 per cent year-on-year, for the last two years".

Paddy, a graduate of Mumbai's J.J. School of Art, says the agency has been consistently successful over the last three years in terms of the creative product, profits and overall growth. He adds: "A posh office, a bizarre culture or mind-blowing philosophy is of no use if you can't keep producing great work. We feel everything else is secondary when we talk about work and, to be frank, we don't have anything to show apart from our work." Conqueror Papers campaign
The economy was tough when Taproot launched in January 2009. Bagging clients was not easy. Aggie says: "Initially, many clients thought we would be cheap, because we were starting out. That was a revelation." Paddy says: "After a few months, we got really lucky." The agency that started out with three people now has 33, most with three to five years' experience. The average age of the team is 24. "This was our original plan," says Paddy. "We stuck to it, and it has worked well for us." Aggie adds that the last three years have been "overwhelming in a positive and negative way - sometimes exciting, sometimes intimidating".

The duo have known each other for nearly a decade, and are on the same wavelength on the creative front. Aggie says: "If the brief involves creative experimentation that could lead to breaking new ground, that is always better than doing the same old thing again." 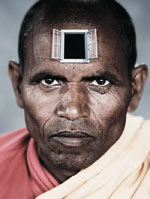 Times Group campaign
The two are proud of Taproot's work over the years, but Paddy singles out the Pepsi Cricket World Cup campaign, which, he says, not only gave their team confidence, as execution was a challenge, but also sent the message to other small agencies that nothing is impossible. For Taproot, the campaign clearly defined the creative tone.

Perhaps the most precious accolades are those that come from rivals. Arvind Sharma, CEO of Leo Burnett, where Aggie and Paddy both worked for almost a decade, says: "Both are incredibly talented. I am happy to see them succeed. Aggie is a versatile writer. And Paddy is one of the best art directors in the world, with a good sense of where advertising is headed."

Sumanto Chattopadhyay, Executive Creative Director at Ogilvy & Mather, South Asia, does not know the Taproot duo personally, but says he admires them for leaving large network agencies to set up their own. "Right from the word go, they have managed to do some fantastic campaigns," he says. "They have done work that has garnered mass appeal, and also niche work, such as the Conqueror Papers campaign. They've done it all in a short time. It's quite incredible."

Both of Taproot's co-founders say they see themselves as coach-cum-player, and that mentoring juniors is part of their job along with creative work. So at least one of them is directly involved in any business they sign on. Taproot is currently headhunting senior professionals, and considering geographic expansion. It is also planning a digital division, as it expects that the digital medium is the next big thing.