A Budget for Bharat

Sure enough, the government's intent to revive the ailing rural and agro sectors to prop up domestic economic growth hit the right chords with the pundits, but soon, serious doubts were raised over the Centre's ability to implement its plans.

During his Budget speech on February 29, Finance Minister Arun Jaitley spelt out the Centre's prerogative on reducing economic distress in rural India through enhanced expenditure in some key areas, including the farm and rural sectors. And it was evident that the Mahatma Gandhi National Rural Employment Guarantee Scheme (MGNREGS), with a budgetary allocation of Rs 38,500 crore for 2016/17 - the highest among the 38 central schemes - would be key to realising that goal.

In fact, a week before the Budget, the central government had informed Parliament that it had increased the number of work days for households in select calamity-hit areas by 50 per cent under the MGNREGS. Households in Jharkhand and select districts, administrative blocks and gram panchayats of Karnataka, Chhattisgarh, Madhya Pradesh, Uttar Pradesh, Odisha, Andhra Pradesh, Telangana and Maharashtra would have additional 50 days of unskilled manual work, over and above the 100 days under the scheme. "The government is talking only about interest subvention, not loan waiver, which is what is required. You need to have a debt relief commission to look into the problems of loans taken by farmers from private money lenders"

Sure enough, the government's intent to revive the ailing rural and agro sectors to prop up domestic economic growth hit the right chords with the pundits, but soon, serious doubts were raised over the Centre's ability to implement its plans.

The performance of the MGNREGS in calamity-hit states so far is, however, self-revealing. The average work days availed by households under the scheme in Jharkhand - a state where all 24 districts will be eligible for 50 additional workdays - between April 1, 2015 and March 2, 2016 were 46.85, with only 11 per cent of households completing 100 days. The situation has more or less been the same across the other states.

Since almost half of the country was affected by drought in the past two years, the question experts are asking is that whether the increase in budgetary allocation for MGNREGS was big enough to make a difference. "With two consecutive years of drought, agricultural incomes have been stagnant or may have even declined. The growth of GDP from agriculture over the previous years was -0.2 per cent in 2014/15 and 1.1 per cent in 2015/16. The stagnation in agricultural incomes implies that rural demand is slowing down," says Jayan Jose Thomas, Associate Professor, Indian Institute of Technology, Delhi.

According to Thomas, the Budget clearly underlines the importance the government attaches to issues in the rural sector, but the amounts allocated for agriculture and rural sectors are clearly not enough. "For instance, the Rs 38,500 crore allocated for MGNREGS for 2016/17 is an improvement over the Rs 34,000 crore in 2015/16, but it is not much if you consider the increase as a proportion of the GDP," he says, adding: "The allocation in 2009/10 was Rs 39,100 crore, or 0.6 per cent of the GDP. In contrast, for 2016/17 it is a mere 0.2 per cent."

Besides MGNREGS, the Budget also identifies irrigation as a critical input for increasing agriculture production and productivity because over 54 per cent of the 141 million hectares of net cultivated area in India does not have the required infrastructure. It aims to bring 28.5 lakh hectares of land under irrigation through the Pradhan Mantri Krishi Sinchai Yojana and has allocated Rs 5,717 crore for it. Alok Sihna, Director General, Indian Council of Food and Agriculture, says that while the allocation is reasonable, it is not good enough to bring about a real change. "Two-thirds of our cultivated area is dependent on rain. Unless there is substantial increase in the allotment to irrigation, agriculture growth is going to remain the same. And that is going to be a continuing disaster," he concludes.

Abhijit Sen, former member of the Planning Commission (the agency was recently replaced by the Niti Aayog), looks at the problem from a much broader canvas and argues that a narrow reading of budgetary allocations - restricted to the department of agriculture, or the ministry of agriculture as a whole - could, however, be misleading. "This is a rural budget, rather than an agricultural one," he says. According to Sen, in 2014/15, rural development, agriculture and water resources ministries had together spent Rs 1,02,000 crore. For 2015/16, the revised estimate was around Rs 1,10,000 crore and the current budget has allocated Rs 1,22,000 crore. "There has been a 9 per cent increase in allocation last year, and 13 per cent this year. The worry is that if there is a crisis, the 13 per cent will be a relatively small add-on."

Out of the Rs 35,984 crore allocated to agriculture and farmers' welfare in the current budget, Rs 15,000 crore is interest subsidy for short-term credit to farmers. While interest subvention should ideally be a great help for debt-ridden farmers, it may not be so for all practical purposes for one simple reason. The majority of farmers who are heavily indebted are not land-owning farmers who can claim institutional credit. Experts say 86 per cent of Indian farmers are either small or marginal, and 80 per cent cultivate on leased land. Of the total amount that banks claim to have disbursed as agricultural credit, around 60 per cent credit is given to traders and warehouses, which is not farm credit, in the real sense. "According to the Reserve Bank of India, only 40 per cent farmers avail institutional credit. Among small and marginal farmers, it is just 15 per cent. So, for 85 per cent of small and medium farmers, this increased outlay in interest subvention will not make much of a difference," says Pravesh Sharma, former chairman, Small Farmers' Agri-business Consortium.

Moreover, a section of experts believe that for the interest subvention scheme to have any impact, it should cover the non-institutional lending systems. "The government is talking only about interest subvention, not loan waiver, which is what is required. You need to have a debt relief commission to look into the problems of loans taken by farmers from private money lenders. Nothing has been done in that direction," says Vijoo Krishnan, National Joint Secretary, All India Kisan Sabha.

Jaitley began his Budget speech with the hope to double the income of farmers over the next six years. This has since become one of the most debated suggestions due to lack of clarity on the ways and means of achieving this goal. Abhijit Sen says that never in the history of any country, real income from farming has increased 14 per cent per annum - the growth percentage needed to achieve the target. However, nominal income of farmers increase every year (inflation-related price rise is one reason) and it has been happening even in India. 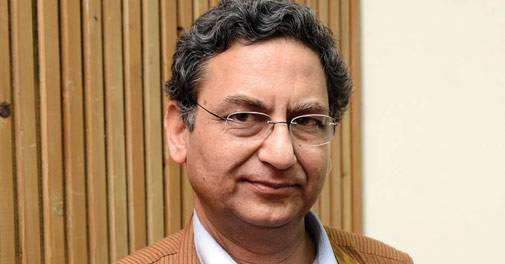 "According to the RBI, only 40 per cent farmers avail institutional credit. Among small and marginal farmers, it is just 15 per cent. So, for 85 per cent of small and medium farmers, this increased outlay in interest subvention will not make much of a difference"

One of the ways that Jaitley seems to be looking at increasing farmers' income is by creating a national e-market for agricultural produce. However, Sharma is not expecting any immediate benefits out of the e-market scheme. "This year only 200 mandis are to be linked. Majority of the farmers who bring produce to the mandis don't bring it in big enough volumes. There has to be a minimum one truck load for somebody sitting in Delhi to buy the lot through the e-channel," he says. 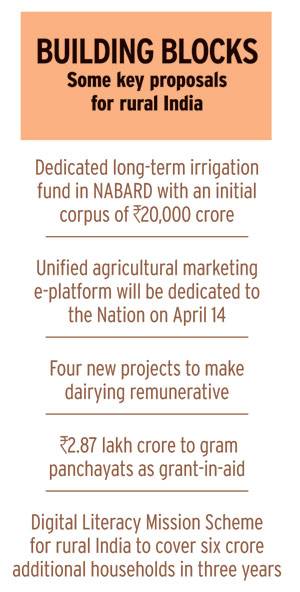 While one could argue on the roles and responsibilities of the Central and state governments, the fact remains that the actual spend in the rural and agriculture sectors will be the over all expenditure of both Centre and the states. The much talked about cooperative federalism also gives emphasis to collaborative efforts of the Centre and the states. With the FM indicating the government's inclination to continue this pattern, the real impact of allocations will actually depend on the cumulative efforts. The fact that only 12 states have so far amended their Agricultural Produce Marketing Committee Acts to become a part of the national agriculture produce marketing platform speaks volumes of the nature of this collaborative effort.

It certainly is a tough ask for the Centre, given the challenges and the resources to implement the Budget proposals, but a handholding between the states and the Central governments might just make the near-impossible, possible.