Amateurs writing food blogs have grown both popular and influential

Internet penetration in India may still be low, but restaurants have realised that wooing food bloggers has suddenly become an important part of their public relations exercise.

People trust reviews from bloggers the way they trust the opinions of friends and family. So we get treated very nicely at restaurants and can get anything we want: Angela Carson <em>Photo: Nilotpal Baruah</em>
Goutam Das / Dearton Thomas Hector
The Sicilian aubergine bake looked tempting enough - round slices of red vegetable with melted cheese on top. But blogger Nandita Iyer took one look and stopped short of digging her fork into it. "It is under-cooked. You can eat many vegetables raw. But aubergine?" she said loud enough for the manager of the restaurant to hear.

The location: a five-star Bangalore hotel, which was offering an expansive Friday buffet lunch.

The manager jumped up from his seat and rushed to her table, promising to find out what went wrong. He disappeared and reappeared in minutes. "Yes, you are correct," he said. "The dish was supposed to be grilled and then baked - it was only baked."

Apologies followed. Time and again thereafter, the manager and other employees came back to her table to ask how she found each item she picked.

This is only one instance of the influence Iyer - a doctor and author of the immensely popular food blog Saffron Trail - wields across the city's restaurants. Owners and managers listen to her while fans keep coming back to her seven-year-old blog for advice on where to eat out, or simply to discover the traditional Tamil Brahmin recipes she industriously collects from grandmothers and records.

Iyer gets 10 invites from restaurants every week, but rejects most of them.

Once upon a time, only food critics of leading city publications drew this kind of deference from the restaurant industry. Internet penetration in the country may still be abysmally low - only 138 million of India's 1.2 billion people are online - but the ones who do surf are also those who comprise the bulk of fine dining restaurants' clientele. They are the ones with the discretionary spending power. With restaurants gradually realising this, wooing food bloggers has suddenly become an important part of their public relations exercise.

"People trust reviews from bloggers the way they trust the opinions of friends and family," says Angela Carson, a Bangalore-based American executive with a social media marketing company, who, in her spare time, blogs about the restaurants she visits (and much else). "So we get treated very nicely at restaurants and can get anything we want."

She goes one step further than merely writing reviews. She takes pictures of restaurants she goes to - of the decor, the dishes and even the rest rooms - and posts them alongside her review at Angela's Bangalore. "I try to give a visual experience through my blog," she says.

Most of the better known food blogs attract over 2,000 unique visitors a day. And the responses each fresh blog post gets run into hundreds. Some restaurant owners readily admit they have benefited from favourable reviews on blogs.

"We have seen an average 20 per cent increase in footfalls after every positive blog review," says Puneet Dhawan, General Manager, Novotel Bengaluru Techpark, a premium Bangalore hotel. It was blogger feedback which prompted the hotel to modify the spread at its Sunday brunch. It added mini burgers, which children preferred, and displayed its desserts more prominently. 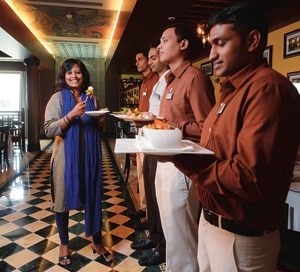 Owners and managers listen to Nandita Iyer while fans keep coming back to her sevenyear- old blog for advice on where to eat out, or simply to discover traditional Tamil recipes
Some restaurants have even begun to carefully analyse food blogs and data related to their effectiveness to use them to advantage.

Recently, one of the most happening fine dining and live music clubs, blueFROG, with outlets in both Mumbai and Delhi, promoted its Happy Hours menu, not by media advertisements, but through bloggers. "We wanted to remove the perception that blueFROG is an expensive place," says Simran Mulchandani, founding member of the club. "Bloggers worked well for us in getting the word out on our Happy Hours menu."

However, food blogs have still some way to go to achieve their full potential. With their glut of loyal readers, for instance, monetising them should have been easy. Curiously that has not happened yet - few of these blogs carry ads.

"My blog gets Google ads and one could do advertorials, but I'm not looking at them right now," says Delhi-based Anoothi Vishal, who runs the blog India - Food and Travel Guide.

Iyer's Saffron Trail too has no ads, though her blog has enabled her to get writing assignments on food for other publications. So too some bloggers themselves insist their influence is somewhat overrated.

"Ultimately, it is up to the consumer, who takes every opinion with a pinch of salt," says Delhi-based Sid Khullar, author of the blog Chef at Large. "We just air our opinions."

20 % rise in the no. of footfalls at restaurants following a positive blog review

There is also a flip side. Since no evidence of expertise on a subject has to be produced before a person is allowed to start blogging about it, people ill qualified to comment have begun writing blogs as well. And that applies to food blogs too - there are indeed bloggers driven primarily by the allure of free food at fancy restaurants.

"Some bloggers threaten us they'll write bad reviews if their demands are not met," says Ashish Kapur, Managing Director of the Chinese restaurant chain, Yo! China. Mahendra S., Manager at The Tao Terraces, a swank Bangalore restaurant, agrees. "Now, every kid wants to write a food blog," he says. "These people eat mostly pizzas, burgers and other junk food, and then suddenly want to write about fine dining."

A la Spiderman, bloggers too need to realise, power has to be used responsibly.