Fund managers do not expect any improvement in investment climate

Business Today-Morningstar's second survey shows most fund managers do not expect any dramatic improvement in the investment climate over the next 12 months.

Mahesh Nayak
Gopal Agrawal, Chief Investment Officer at Mirae Asset Global Investments, meets with executives at several companies every three to four months. The objective is to get feedback on the companies' functioning and gauge their sentiment. His latest meetings, with executives at mid-to-large companies in Kolkata and Chennai in early June, gave him few reasons to cheer. The overall mood was subdued compared with his previous meetings four months ago. "They have been badly hit by a weakening rupee and the economic slowdown," he says. "A wide current-account deficit and weak economic growth are the biggest concerns."

Despite the gloomy picture painted by Corporate India, Agrawal has been a buyer in the falling stock market. Earlier, he kept about four to five per cent of his portfolio in cash but now he has invested all his cash. "In the past 10-15 days we have completely deployed our cash and added stocks to our portfolio," he says. Agrawal has stayed away from stocks that are directly impacted by the economy, such as construction, realty and cement. He has bought pharmaceuticals, logistics, oil and gas, and private-sector banking stocks. Agrawal expects the government to speed up its investment process ahead of general elections due by May 2014.

The feedback Agrawal received during his meetings is consistent with a quarterly survey of fund managers by Business Today and mutual fund research firm Morningstar. The second BT-Morningstar Asset Allocation Survey shows most fund managers do not expect the investment climate to improve substantially over the next 12 months. The survey for the July-to-September quarter polled 11 fund managers on the outlook for the Indian economy and markets.

Some fund managers feel stock markets have overreacted to the rupee's fall to record lows against the US dollar. Alok Sama, founder and President at investment banking firm Baer Capital Partners, says stock markets are falling not just in India but also in other emerging markets due to the US Federal Reserve's decision to gradually roll back its stimulus package that had fueled liquidity worldwide in recent years. "There is blood on the street, but once it stabilises we may see good buying. I will be a buyer in this market," he says. Sama feels the markets will remain volatile in the near term. He prefers to bet on financial stocks, blue-chips and large-caps on the National Stock Exchange's Nifty index for one year, and on select mid-caps but the holding period would be three to five years. 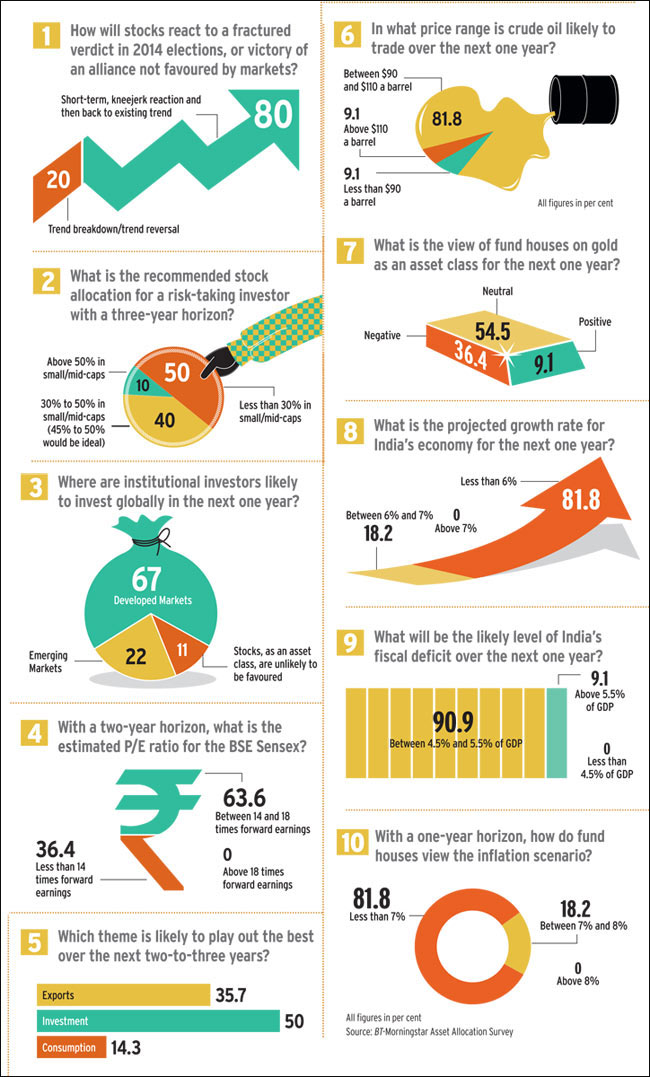 The survey shows 40 per cent of the fund managers suggest investing 30 to 50 per cent of the portfolio in small- and mid-cap stocks over three years. This is down from 69 per cent in the previous survey, indicating a growing preference for largecap stocks. The survey shows also that more fund houses than before feel the Bombay Stock Exchange's Sensex will remain under pressure. Less than two-thirds now expect the Sensex's price-toearnings ratio - a gauge of the index's valuation - between 14 and 18 times over the next two years, versus almost 92 per cent previously.

The weak rupee remains a concern, though. The local currency has already fallen below 60 to a dollar. About 64 per cent of those polled expect the rupee to stay below 55 to a dollar, compared with 50 per cent in the previous survey, and no one sees it rising above 50 in 2013.