When the Financial Times came out with its Global MBA Ranking in 2017, it was a mixed bag for Indian B-schools. Not a single Indian institution was among the top 25 although INSEAD (France and Singapore) grabbed the top spot for two years running. Hyderabad-based Indian School of Business (ISB) emerged the leader from India with an overall 27th rank while Indian Institute of Management (IIM) Ahmedabad slipped five spots to land at No. 29. IIM Bangalore was up 13 spots to be 49th and IIM Calcutta, a first-time entrant to the elite league, finished a distant 95th.

Closer home, the tidings are not good. According to a 2016 report by ASSOCHAM Education Committee, only 7 per cent of the students graduating from an estimated 5,500 B-schools in India are employable. The study goes on to say that barring a handful of top institutions, most of the B-schools in the country are producing sub-par graduates. Consequently, they earn less than `10,000 a month when they manage to find placements. As management training is expensive and requires medium-to-long-term commitment, low education quality, coupled with shrinking campus recruitment due to the current slowdown, does not augur well for thousands of young aspirants. 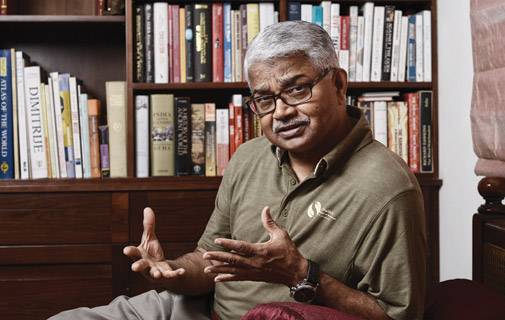 Tapan K Panda, Dean at JGBS at Sonepat, Haryana, says it is ideally positioned to evolve into a multidisciplinary management school. "We have six other schools specialising in Law, Liberal Arts, Public Policy, Corporate Affairs and other relevant topics around us, and our students get a chance to attend courses across domains, a quality that is much sought after in today's business leaders." As Sonepat is home to several small and medium enterprises (SMEs), the B-school has further developed an SME network so that their students could understand the challenges that the sector faces and how to deal with those. It will help them go back to their family businesses or start their ventures when college is over, says Panda. In addition, over 100 students visit international campuses every year to gain global perspective. JGBS has tied up with European Business School in Germany, Queen Mary University of London, the University of New Brunswick in Canada and others to facilitate these visits.

Similar tie-ups with top overseas institutions have taken place, thanks to India's growing MBA market. Italy's SDA Bocconi School of Management (under the University of Bocconi in Milan), in collaboration with the Mumbai International School of Business (MISB), started offering a post-graduate programme in Business from July 2012. This is SDA Bocconi's first foray outside Europe. "In Milan, there is always a cohort of Indian students who have chosen SDA Bocconi for the next steps in their career; so it made sense to offer the school faculty and the content directly in the country, recruiting from excellent potentials who cannot afford the investment of going to Europe," says Alessandro Giuliani, Managing Director of MISB Bocconi.

Another key offering includes courses developed in collaboration with large corporates. For instance, BML Munjal has tied up with Axis Bank and IBM. "We offer an MBA programme in Business Analytics in association with IBM where the latter is responsible for creating the content and also delivers part of the course. This helps bring in real-world knowledge to the classroom and also increases students' employability," says Talwar.

Even then, schools that offer international business degrees are only a few due to the red tape and bureaucracy involved in setting up an overseas unit in India. In 2007-08, GMR wanted to bring in a top foreign university to India and develop an educational hub near the Rajiv Gandhi International Airport in Hyderabad, operated by the conglomerate. "We were told that the Foreign University Bill would be passed in six months. So, we started looking at the top Canadian schools and shortlisted Schulich School of Business," says V. Raghunathan, Chief Executive Officer at GMR Varalakshmi Foundation and Director at the Indian campus of Schulich School of Business, York University, Toronto. But the Bill did not take off, and the authorities had to recalibrate their plans to meet the norms of All India Council for Technical Education (AICTE). "There was no business case for a full-fledged campus. So, for the two-year MBA programme, the first year's training is now conducted in India and the second year's course on the Schulich campus in Toronto," he says.

It also means the intended batch of 180 has to be limited to 50 students. The reason: Of the 800 students on the Toronto campus, 100-125 are Indians. If the size of the India batch is increased here, the country will be overrepresented when they go to Toronto.

The small size of the batch is also unviable, says M. Rammohan Rao, former provost at Woxsen School of Business, former dean and Professor Emeritus at ISB, and former director at IIM Bangalore. It is because universities have to get AICTE approval regarding the number of students. The rationale - the institute must prove its worth before increasing student strength. "Usually a class of 180-240 students is a viable one but AICTE does not give its permission before 5-10 years," says Rao.

Due to this stipulation, the new B-schools often have to turn down good candidates. But the small batch size leads to a vicious circle as companies do not want to come due to fewer number of potential hires.

Another key concern of corporate-backed schools is that they are not yet viable and largely depend on corporate funds. Things work out fine as long as the company is doing well, but as soon as it starts performing poorly, the funding gets affected. Understandably, a limited number of students does not help when the school is facing a fund crunch. Many of these institutes also depend on the visiting faculty due to a lack of academic talent. But it is not a long-term solution, says Rao.

Are things as dismal as they seem? According to Raghunathan, "Miracles happen most unexpectedly in India. Surat had a plague scare in 1994 and is now one of the cleanest cities in the country. We will wait for that miracle and until then, do the best we can."