As equity remains in the dumps and debt an expensive proposition, private equity finds its place in the sun. But in today’s sombre times, the rules of the game are different, and decidedly in favour of investors.

Rachna M. Koppikar
Century plyboards India, a Kolkata-based company, had to drop plans for a qualified institutional placement, but has, since, been scouting for private equity (PE) funds for an expansion in cement production. With the sharp fall in markets over the past few months, the company has brought down its indicative price for PE funds. It has finalised a deal with a PE fund, but the agreement is not binding on both parties. “We hope to get government clearance in a few months. We will review the terms of the deal once the clearance is received,” says Sajjan Bhanjanka, Managing Director, Century Plyboards. 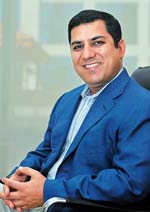 Sameer Sain
In 2007, Acme Tele Power, a Delhi-based telecom infrastructure company, raised around Rs 600 crore through a clutch of private equity funds, a proprietary arm of an investment bank and a hedge fund, in a pre-IPO (initial public offer) placement. As the company couldn’t proceed with the IPO in 2008, the pre-IPO investors pressed the sell button and now want an early exit from the company.

In 2007, Ajaay Gupta’s phone never stopped ringing. Every week, the MD of Capital Foods, the Mumbaibased food processing company, got calls from at least two PE funds, desperate to close a deal over the phone. Come 2009, the number of calls has come down, and so has the valuation. Gupta claims he doesn’t regret taking the bait of the PE players then as he had secured funding from Future Capital’s PE fund in 2006.

As global markets ride a rollercoaster, a lot has changed: Sentiment, expectations—and the relationship between promoters and PE funds. That’s in sharp contrast to the glory days, when promoters rode the surge in valuations, and PE investors rode pillion on the boom. Also investing in public listed companies—which is not exactly what PE funds are meant to do if you go by the textbooks— was seen as a surefire way to make big bucks. The strategy paid off handsomely until the debt and equity markets started collapsing in 2008. With valuations of portfolio companies of PE funds coming down significantly, they sit on huge notional losses. Many portfolio companies are on the verge of huge debt defaults. Institutional investors have developed cold feet as they want to reduce allocations to PE funds and other such alternative asset classes. Boston Consultancy Group (BCG), in a December report titled Get Ready for a Private Equity Shakeout, expects 20-40 per cent of PE firms all over the world to go extinct.


Cash for survival
Back home, the deal flow has reduced to a trickle, and PE funds that hoped to cash out when companies go public have to now wait— and no one knows for how long. The good news from the PE point of view is that businesses need money—if in the boom times they needed investments for growth, now they, perhaps, need cash for survival—even as valuations have been beaten down to attractive levels. Also, many funds are sitting on cash raised in better times. Prequin, a London-headquartered PE fund, estimates that at least 78 PE funds plan to raise $24 billion for investing in India in 2009. The bad news? Hedge funds and proprietary desks of global banks, which are facing huge redemption pressures and mounting losses, are desperate to exit portfolio companies. A prominent global bank that came to India a few years ago has mandated a few investment banks to find buyers for some of its PE deals done since 2007. 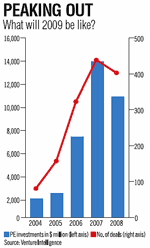 For those funds that are in investment mode, now is the time to return to what good old PE investing is all about—find a company early, add value to its growth game plan, and lead it to an IPO, over a period of time. Sameer Sain, CEO & MD, Future Capital Holdings or FCH (an arm of the Future Group), explains that Indian PE market has followed a three-leg cycle. The first leg was the start of the bull markets where began to see momentum investing by PE funds and hedge funds, and proprietary desks of investment banks. The result: lot of PIPE (private investment in public enterprises) transactions where PE funds were willing to compromise on rights, diligence. “We are now in the third leg of the cycle where instead of relying on markets and momentum, classic PE investing will be in focus. This means rolling up your sleeves and working closely with your portfolio companies on operational and strategic improvements,” adds Sain. FCH has assets worth $1.5 billion under advisory.

Akhil Gupta, Chairman & MD, Blackstone Advisors India, says making money has got tougher. “We have to work hard to find a company that we can take to the next level of performance with our experience and management value addition. That is how one generates the incremental internal rate of return. The company has to be transformed on the basis of the value that a PE fund can bring,” warns Gupta. He has increased his fund’s return target from 25 per cent on a risk-adjusted basis to 30 per cent. “We need to find great companies that can generate such returns. At the same time, expected return from investments in the US are currently pretty high so it’s difficult, but not impossible, to compete for allocation for India now,” he adds. 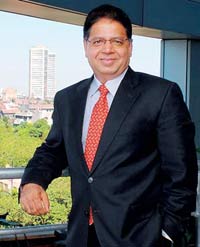 Akhil Gupta
A slowdown also allows PE fund managers to spend more time with their portfolio companies. “It wasn’t a pleasant experience being an investor in 2007 because nobody cared about what value you could bring to the table. But it’s during times like these that promoters become more rational and start valuing the importance of the PE fund’s skills and knowledge,” says Abhay Pandey, MD, Sequoia Capital India Advisors, which has assets worth $1.8 billion dedicated to India. Pandey recounts the experience of the hey days when the investment bankers would bring investment proposals and just gave 2-3 weeks to revert with their proposals or term sheet. Today, investors (PE funds) determine the time for due diligence, which can go upto six weeks. Bharat Banka, MD & CEO of the newly-started-up Aditya Birla Private Equity, talks about a similar experience. “The talk about valuation has become secondary in most discussions with promoters. Today, they are more open to listen to our suggestions about value-addition. They want to know how we can help them in their business and strategy during these times,” says Banka.

Bear markets also allow PE firms to indulge in some hard-nosed negotiation. Says Alluri Srinivasa Rao, MD, Morgan Stanley Private Equity Asia: “Now you may see more rights being included in investment proposals of PEs.” But he refuses to divulge details of the rights in his fund’s first investment of Rs 182 crore in castor oil manufacturer, Biotor Industries, in December 2008. Luis Miranda
Downside protection
To be sure, the balance of power has shifted in favour of PE funds. For instance, a foreign PE fund recently picked up a minority stake in an unlisted company and wrangled a board seat; it also got the power to take decisions in the company’s day-to-day operations, set soft performance targets for three years and induct professionals in the senior management. The head of another large PE fund says he managed to get “downside protection” in a recent investment in an unlisted company. So, if a company goes for second round of funding at a lower price, then the first PE investor’s price will be reset at the lower levels. Now that’s something promoters wouldn’t have given in a raging bull market. “PE funds now insist on getting a board seat in the company, a right they rarely insisted upon when the market conditions were good,” says V. Jayasankar, Head (PE Advisory), Kotak Mahindra Capital Co.

K. Ramakrishnan, Executive Director & Head (Investment Banking), Spark Capital Advisors, a South India-based financial services firm, explains that funds get more negotiating power with companies that are in the middle of executing their expansion plan and have no option but to raise resources. In a secular bull market, it’s difficult to ascertain if a PE fund gained because of the market momentum or because of its contribution to the company’s growth. “As a result, we are seeing more PE companies spend time with the company’s management, ask relevant questions, monitor its performance and exercise the available rights more rigorously,” he adds. Luis Miranda, President & CEO, IDFC Private Equity, says he and his team are spending more time with his 24 portfolio companies than before. “The big concern today is to see whether companies really need the capital for expansion. Can they do without expansion? How can costs be controlled? Are there any alternative sources of funding?” asks Miranda. K. Ramakrishnan
The accounting fraud at Satyam has also made PE funds cautious and diligent. “Funds now expect more rights and disclosures on corporate governance related issues,” says Miranda. While investing, his firm insists that promoters of his portfolio companies should restrict the amount of shares they pledge and the cash in hand figures are scrutinized more closely. Alok Gupta, MD & CEO of Axis Private Equity Fund, says while doing due diligence on prospective companies, his firm spends more time meeting the consultants, lawyers, bankers and other stakeholders. “The related party transactions, accounts, revenue buildup, hiring of key personnel, and promoters’ dealing are being checked thoroughly,” says Ramakrishnan. As a result, the time taken to finalise the investment agreement has doubled to four months.

It’s unlikely that PE funds will make a big splash in 2009. Many PE funds turned down deals in 2008 simply because the promoter was asking for too much. In these tough times, promoters will realise that higher valuations don’t translate into higher growth. Sain recollects how an unlisted firm chose to go with a global investment bank as the company got higher valuation and gave few rights. Two years on, the company hasn’t shown any remarkable growth and the global investment bank now wants to exit from the firm. As BCG’s report suggests, the key differentiator in today’s downturn will be “operational value creation” in portfolio companies. “The PE industry may be in the middle of a perfect storm, but downturns are the perfect moment to do deals,” the report concludes. Do promoters agree?