Many NBFCs may soon morph into banks

The corporate-backed NBFCs have a brand presence across the country through the diversified operations of their groups. Like banks, these large NBFCs are also selling a range of products to their customers in metros and urban areas. Analysts say it would be easier for these NBFCs to transform into banks because of their financial muscle, management bandwidth and a well-established brand name.

Anand Adhikari
About 350 km from Mumbai, in Tembhurni village, a branch of Mahindra & Mahindra Financial Services Ltd is barely visible to potential customers in a dusty lane full of shops and eateries. But the nondescript branch has become the cynosure of many eyes in the non-banking finance company (NBFC) . The reason: its sales and profit are growing at a pace faster than most of the company's rural branches across the country. "I expect to close 2012/13 with a profit before tax of Rs 5 crore," says Nitin Somvanshi, the branch manager, with a wide smile.

The company, commonly known as Mahindra Finance, set up the branch in 2006. Nestled in the sugarcane, banana and grape belt of Maharashtra's Solapur district, it covers half a dozen villages and caters to customers as far as 30 km to 40 km away. Its nearly two dozen staffers sell loans for tractors, two-wheelers, cars and commercial vehicles. They also collect equated monthly installments in cash from borrowers' doorsteps.

Being part of the Rs 88,000 crore Mahindra & Mahindra Group, which holds a 52 per cent stake in the NBFC, helps. The sales leads for tractors and utility vehicles, for instance, come from the dealer network of M&M, the industry leader in both segments.

The branch is a clear indication that the company's strategy of focusing on rural and semi-urban areas is paying rich dividends. The NBFC, founded in 1991, has two million customers and closed 2011/12 with a net profit of Rs 620 crore on revenue of nearly Rs 2,670 crore. While revenue is higher than that of some old private banks such as Dhanlaxmi Bank, profit exceeds that of even mid-sized lenders such as ING Vysya Bank. Net bad loans, at 0.70 per cent of advances, are lower than those of many top banks.

The robust financials make Mahindra Finance a strong contender for one of the new banking licences that the Reserve Bank of India (RBI) plans to grant soon. Another NBFC which is a potential candidate for a bank licence is Shriram Transport Finance. The company has created a niche for itself in giving loans for commercial vehicles in smaller towns.

The RBI last awarded bank licences nearly a decade ago, to Kotak Mahindra Bank in 2003 and YES Bank in 2004. Unlike on previous occasions, this time the new licences could go to corporate houses as well. The RBI's draft guidelines stipulate a minimum capital of Rs 500 crore for setting up a new bank.

The old licensing guidelines did not contemplate the entry of large corporate houses into banking, and the RBI had sought powers to inspect the accounts of all associate companies of a bank for regulatory oversight. 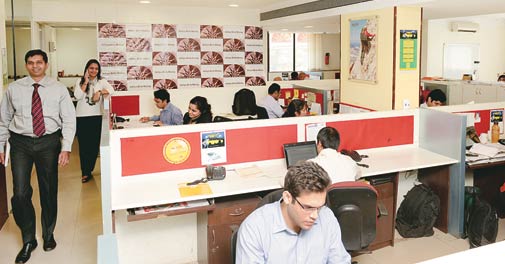 A branch of Aditya Birla Money in Mumbai. The Aditya Birla Group operates on a financial supermarket model and offers a range of products and services
Last month, Parliament approved amendments in the banking law, giving the RBI the power to check the books of a bank's associates in case of any wrongdoing and even supersede a rogue board. The announcement about new bank licences was first made in February 2010 in then Finance Minister Pranab Mukherjee's Budget speech. The intention was to expand the reach of banking services in rural and semi-urban areas, where more than half the country's population lives. There are 45 local and 41 foreign banks operating in India with a total of more than 83,000 branches, but most of these are in urban areas and a vast majority of the rural population has no access to financial services. New banks are expected to correct this anomaly.

Ramesh Iyer, Managing Director, Mahindra Finance, makes the company's plans clear. "Our focus will remain on rural customers even if we convert into a bank. Our assets will still largely come from rural areas," he says. Mahindra Finance is not worried, though, and is looking at other villages. A new branch in village Barshi is on the cards. The village is currently being served by both the Solapur and Tembhurni branches.

"There are other villages too where private banks have not reached yet," says Sachin Patwardhan, regional manager in charge of operations at Mahindra Finance.

The business model of Mahindra Finance is different from those of other contenders for bank licences. Corporate houses such as the Tatas, Aditya Birla Group, Bajaj Group, Larsen & Toubro, and Anil Ambani's Reliance Group follow a financial supermarket model that includes NBFCs to offer loans and other units for insurance, mutual fund, broking, wealth management and private equity businesses. Top banks such as HDFC Bank and ICICI Bank follow the same model. The corporate houses already occupy leadership positions in several segments. Bajaj Allianz Life Insurance Company, for instance, is the third largest insurer after ICICI Prudential and HDFC Life. 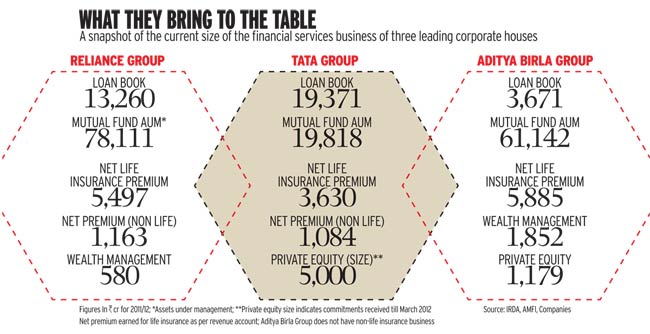 "We want to cover all the products that a bank offers," he says. The corporate-backed NBFCs such as Tata Capital, Bajaj Finance and Aditya Birla Finance have a brand presence across the country through the diversified operations of their groups. The Aditya Birla Group, for example, makes aluminium, cement and textile products and also provides telecom services. "With a rich base of customers who have dealt with the group over many decades and with a track record of building strong businesses, we are well positioned to reach mass India," says Ajay Srinivasan, CEO of Aditya Birla Group's financial services business.

Like banks, these large NBFCs are also selling a range of products to their customers in metros and urban areas. "We started our relationship with promoter funding some 10 years ago and extended it to mutual fund investments," says Ajit Kumar Jain, Joint Managing Director, IPCA Labs, an Aditya Birla customer.

Analysts say it would be easier for these NBFCs to transform into banks because of their financial muscle, management bandwidth and a wellestablished brand name. Many NBFCs have built a comfortable loan book size of more than Rs 20,000 crore.

There is a third category of players who are in the running for a bank licence. These are niche financial institutions in housing and infrastructure sectors. LIC Housing Finance, a unit of state-run Life Insurance Corporation, has expressed its willingness to start a bank. The mortgage lender has a loan book of nearly Rs 60,000 crore. It posted a net profit of Rs 914 crore on revenue of Rs 6,115 crore in 2011/12. LIC Housing and others like it are in fact better placed to get the new licences because of the continuing opposition in some quarters to allowing corporate houses to enter the sector. C. Rangarajan, Chairman of the Prime Minister's Economic Advisory Council, for instance, said recently that non-corporate institutions should be preferred for banking licences. Nobel laureate and former chief economist of the World Bank, Joseph Stiglitz, has talked about a potential conflict of interest if corporate houses open banks. The regulatory turf in the banking space will change the business model of NBFCs converting into banks: Naresh Makhijani
Challenges galore
After the first set of licences were issued to private banks in the 1990s, there was a marked improvement in customer service. Banks adopted better technology, deployed ATMs everwhere, and came up with innovative products on the retail side. Is there a differentiating factor now?

The challenge for new banks, says Aditya Birla Group's Srinivasan, is to develop new low-cost distribution models. "New banks will also have to look at segments where competition is low. Technology adoption will improve and the use of analytics will rise, resulting in efficient customer acquisition and better risk management," he adds.

Still, it is not easy to transit seamlessly from an NBFC to a bank. The business models of the two are different. NBFCS deal with risky customers such as non-salaried and self-employed people, which banks avoid. Mahindra Finance admits it extends a helping hand to people who sometimes fail to pay on time. "We look at the intention to pay and not necessarily the capacity," says Amit Gokhale, Territory Manager at Mahindra Finance.

The main challenge will come on the regulatory front because, unlike NBFCs, banks are highly regulated. Some NBFCs, for instance, give loans against shares to company promoters or for real estate activities. Banks are either not allowed to undertake such transactions or face restrictions. "The regulatory turf in the banking space will change the business model of NBFCS converting into banks," says Naresh Makhijani, Partner at accounting firm KPMG.

There are no big success stories of NBFCs scaling up to become successful banks. Rather, Centurion Bank, which was born out of 20th Century Finance, had to later merge with HDFC Bank. NBFCs say that having the right strategy in place is more important. "We have managed to create a sustainable and profitable business in an NBFC setup despite not having access to low-cost funds, which banks do," says the CEO of an NBFC unwilling to be named.

Executives at NBFCs note that it is not only NBFCs, plenty of banks too have either folded up or merged with bigger players. These include Global Trust Bank, Times Bank, Lord Krishna Bank, Bank of Rajasthan, and Bank of Punjab. But the big concern as the RBI prepares to issue the final licensing guidelines is not the possible failure of a bank due to weak financials. It is about corporate governance and the potential conflict of interest of large conglomerates running a bank in their backyard. Over to the RBI.