BlackBerry Z10 may not revive its maker's fortunes in India

BlackBerry, second among smartphone makers in 2010 according to CyberMedia Research, has steadily lost market share to Android devices. Many analysts say BlackBerry is going the Nokia way. Nokia, once a global market leader, somehow lost sight of its consumers and was overtaken by Samsung.

BlackBerry Z10
Just a week before the launch of BlackBerry's BB10 devices in India, its offices in Gurgaon, near Delhi, seemed oddly quiet. The lack of eye-catching brand paraphernalia and bustling staff were reminiscent of the India offices of Finnish mobile phone maker Nokia right before it launched its Lumia series of Windows phones, over a year ago. Most of the Canadian smartphone maker's staff were out, preparing retail and enterprise personnel for the expected sales of phones with the new BB10 operating system. The desolate offices seemed to suggest desperate efforts to stem the decline in market share and win back customers.

However, Sunil Dutt, Black-Berry's Managing Director in India, does not seem worried. "I'm excited," he says. He joined BlackBerry in December 2011, when Android smartphones suddenly seemed to be everywhere, elbowing BlackBerrys out of their way. Industry watchers say Dutt is a formidable rival. He worked with Nokia in its heyday, and later joined Samsung and engineered a massive shift of distributors from Nokia to the Korean company.

But it may take more than his sales acumen to win back BlackBerry deserters. BlackBerry, second among smartphone makers in 2010 according to CyberMedia Research, has steadily lost market share to Android devices, and the biggest gainer is Samsung . And while the BB10 has got great reviews, the fact is that its first device, the Z10 - to be priced around Rs 40,000 - competes with high-end Android devices, Apple's iPhone and the latest Windows Phone. Sunil Dutt, MD, BlackBerry India
Many analysts say BlackBerry is going the Nokia way. Nokia, once a global market leader, somehow lost sight of its consumers and was overtaken by Samsung. It was a latecomer to touch screens, and the Microsoft Windows association came after Android had already gobbled more than half the smartphone market.

BlackBerry did introduce touchscreen smartphones such as the Torch and Storm, but they used an operating system designed for keyboards. Only last year it announced that it would launch a superior platform, the BB10 .

"As far as revamping is concerned, they are in the same league as Nokia was three years back," says Anshul Gupta, Principal Analyst at global technology research firm Gartner. "For BlackBerry, it is like building from scratch."

Dutt disagrees. "We don't depend on anyone for an operating system," he says. In 2011, Nokia bet on Windows for its future smartphones. But BlackBerry must face the fact that the volumes are at the low end of the market - phones priced under Rs 15,000. In countries such as Indonesia and India - two of BlackBerry's most important emerging markets - as many as 45 million BlackBerry devices are sold each year, mostly at the low end, according to Byron Capital Markets. Affordable BB10 devices are more than six months away. "There will not be an abrupt transition. It will be a gradual transition," says Dutt.

The enterprise segment, where Blackberry dominates, is seeing customers increasingly open to alternatives

In 2009, BlackBerry did everything right. It launched the Vodafone 'BlackBerry boys' campaign and lowered the price of entry-level Curve handsets. Its new white and red Curves were a hit. College kids got hooked on to BlackBerry Messenger, a free substitute for SMS that let users share pictures or videos and chat in groups. The BlackBerry was a social networking device. Sales soared, but success was short lived. In the last quarter of 2012, CyberMedia Research reports, Apple shipped 280,000 devices in India, while BlackBerry shipped just 210,000.

Analysts say that even with a range of devices, the BB10 won't bring in the volumes. Amit Goel, CEO of research firm Knowledgefaber, says: "The company will do well to hold on to its five per cent market share in the Indian smartphone market, where Samsung tops with around 40 per cent."

"It is critical to come out with affordable BB10 devices," says Canadabased Kevin Restivo, Senior Analyst at International Data Corporation (IDC), a technology market intelligence firm. "We will see less of transition in the emerging markets."

Tom Astle, Technology Analyst at Byron Capital Markets, writes that emerging markets are "where BlackBerry has traditionally had strength and still has a solid brand." He adds that "for penetration here, we believe BlackBerry will need to offer a lower end model than the ... Z10." He expects only a four per cent upgrade in emerging markets, which works out to 12 million smartphones.

In India, BlackBerry can capitalise on its large user base, but at the low end of the market, it will continue to offer devices which run on the old BB7 operating system. Contrast this with Nokia's strategy of introducing Windows phones priced between Rs 10,000 and Rs 36,000. 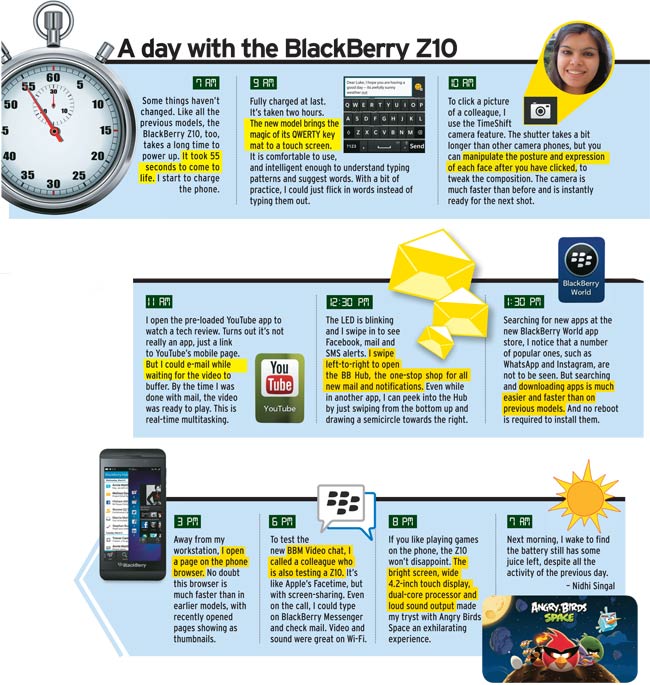 Click here to Enlarge
In the enterprise segment, where BlackBerry has long dominated, customers are increasingly open to other options. So while some, such as Standard Chartered Bank, have switched to the iPhone, others are exploring Windows Phone 8. Praveen Pai, Director at Symphony Teleca, says his company switched to Windows phones as they had a more intuitive interface, user-friendly tools, and better security features.

Dinesh Wadhawan, Chief Operating Officer of telecom tower company Viom Networks, says it is important to leverage cost efficacy with Android devices and not get stuck with closed platforms that cost more to achieve the same outcomes. BlackBerry's Dutt says he believes his company is likely to get it right in the enterprise segment.

"Security is a big reason to worry, as companies are moving into a mobile environment," he says. BlackBerry, he adds, is much more than the devices sold - servers and enterprise software are crucial.

Optimism about the new BB10 device is guarded. "We remain sceptical of Blackberry's ability to orchestrate a sustainable comeback, but we believe that a successful launch will increase the option value of credible positive outcomes like a stabilised niche positioning, the development of new business models, strategic partnerships or even an acquisition," writes Pierre Ferragu, Senior Analyst with Bernstein Research, an equity research firm.

Many experts say BlackBerry's best option is to hold on to the customer base it has. "BlackBerry has held on to its customer base in the business segment," says IDC's Restivo. "It will have to see its transition in this segment."

BlackBerry plans to launch the Z10 and Q10 now, and four more devices later. The company has also started a global programme for application developers, guaranteeing all those who are eligible a minimum of $10,000 a year. The BB10 app store started with 70,000 apps, and that number is growing fast. Apple and Android have more than 700,000 apps each, while Windows, a relative newcomer, has 125,000. From Dutt's perspective, marketing is the key. Since he joined BlackBerry, he has increased the brand's footprint from 80 to 250 towns. He may be able to reach out to more customers by reorganising channel partners, and by introducing innovative campaigns and tieups with telecom carriers. But that's the most he can do, and it's not enough. He will have to find a way to revive BlackBerry's lost mojo - something Nokia is struggling with despite its financial and marketing might.
Published on: Mar 04, 2013, 12:00 AM IST
Posted by: Navneeta N, Mar 04, 2013, 12:00 AM IST