Bollywood having a dream run at the box office

Minting money from movies: Siddharth Roy Kapur, Managing Director, Studios, Disney UTV Photo: Rachit Goswami
Anand J
Be it to watch a sperm donor's love affair, an athlete-turned-rebel's poignant tale or a pregnant woman's quest for her missing husband, Indians are flocking to movie halls like never before. And everyone from actors, producers and distributors to multiplex operators is laughing all the way to the bank.

The numbers speak for themselves. In 2010, two films made Rs 100 crore in net box office collections, excluding taxes. The number of films touching the new benchmark for a blockbuster rose to five in 2011. Less than eight months into this year, five films have already crossed that mark, and more are expected to do so in the festival season when several top actors will showcase their work. Similarly, the number of films making Rs 40 crore rose from 10 two years ago to 15 in 2011 and 14 so far this year.

What explains this spurt in the past two years? Analysts say there is a host of factors for the industry's great run. "It is the hard work that the industry and studios put in after the recession," says film trade analyst Komal Nahta. "Everybody pulled up their socks, including the marketing, distribution, pre-production and budgeting teams."

Siddharth Roy Kapur, Managing Director, Studios, Disney UTV, says more people are thronging the theatres for the "multiplex experience." In the past few years, multiplex chains have expanded with the rise in the number of shopping malls where these screens are located. On the other hand, single-screen theatres are finding it difficult to survive, especially in urban centres. There are about 1,000 multiplex screens in India and nearly 10,000 single screens. Multiplex chain operators, including PVR, Inox Leisure and Cinepolis, plan to set up 400 screens in the year through March 2013.

Multiplex operators have also increased ticket prices by 15 to 20 per cent in the past couple of years, as they seek to cash in on the trend and to offset inflation. The average ticket price at multiplexes is now Rs 145, compared with Rs 60 at single screens. The growing importance of multiplexes is evident from the fact that they contribute about 65 per cent of the revenue earned by the top 50 Hindi films, according to BoxofficeIndia.com, a portal which tracks ticket collections. 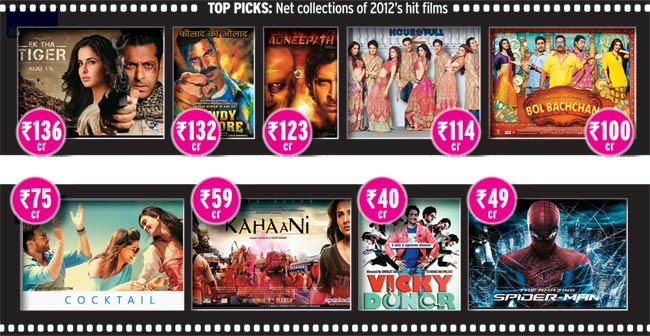 Still, a big budget does not guarantee success, and movies with unique ideas are drawing in more crowds. Small-budget films such as Vicky Donor and Kahaani have been a special feature of this year, says PVR Chief Operating Officer Gautam Dutta. Disney UTV's Kapur agrees. "We try to ensure that our bucket is always diverse and attracts all kinds of audiences," says Kapur.

Marketing strategies are gaining importance as well. For instance, Eros International, the studio which produced Vicky Donor with a budget of Rs 5 crore, spent Rs 7 crore on marketing.

Film makers are also giving a lot of thought to promotional videos to attract viewers in initial days. "The viewer makes up his mind on whether to watch a film then and there. You have to create curiosity with the trailer and promos," says Nandu Ahuja, Senior Vice President, India Theatrical, Eros. This way the studios ensure a good opening on the first weekend or week, he says. 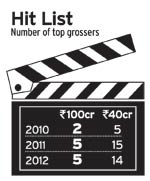 This has prompted distributors to extend the first weekend to four or five days by taking advantage of public holidays. Big films, including Bodyguard, Ra.One, Agneepath, and this month's Ek Tha Tiger and Gangs of Wasseypur 2, were all released in the middle of the week. Ek Tha Tiger, starring Salman Khan, mopped up Rs 32 crore on the day of its release on Wednesday, August 15, and crossed Rs 100 crore in the first six days.

An industry analyst says focusing on the first week does not help much in total collection, as people who want to see a movie would watch it irrespective of the week. For instance, Bodyguard raked in Rs 53 crore in its five-day-long first weekend and Rs 143 crore overall. Rowdy Rathore collected Rs 45 crore over its three-day-long first weekend and Rs 132 crore in total. That boils down to almost the same ratio, he says.

Keeping in mind this trend, multiplex chains are adopting varied tactics to maximise revenue. "Usually weekend customers are time-poor and cash-rich, and weekday customers are time-rich and cash-poor in relative terms. By following a differential pricing for the two sets we are getting good footfall across the week," says PVR's Dutta.

No wonder then that more films are recovering their production cost. Trade analyst Nahta says the success ratio of Hindi films has gone up from 15 per cent in 2010 to 25 per cent so far this year. The industry's local theatrical revenue is projected to grow 10.6 per cent to Rs 7,350 crore in 2012/13 from Rs 6,880 crore in 2011/12, according to the KPMG Media and Entertainment report 2012. Many more films will become profitable if satellite, digital, audio and home-video rights, and overseas box-office collections are included.

Among the films lined up for release later this year are Ajay Devgn's Son of Sardar, Akshay Kumar's Joker, Ranbir Kapoor's Barfi, Aamir Khan's Talaash, an untitled film starring Shah Rukh Khan, and the James Bond franchise's Skyfall. The box office looks set to extend the great run... after all, there are 18 Fridays to go!