The second BT-C fore Business Confidence Survey shows companies have lost the optimism they displayed in the first. They are worried, both for their profits and the economy.

Harsh Goenka, the 54-year-old Chairman of the Rs 18,000-crore RPG Group, has steered his tyres-to-retail business through many cycles of ups and downs. "Expensive finance is affecting business in two ways," he says, discussing the latest slowdown. "Demand has been impacted as the cost of money is high. So anything that needs consumer loans like consumer durables or automobiles is affected. Secondly, profit has come down as the interest cost has gone up." He warns that at a later date this could affect GDP growth too. 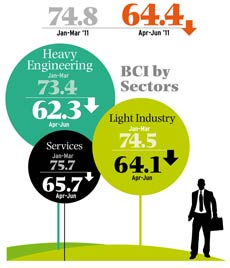 Click here to Enlarge
The second round of the quarterly BT-C fore Business Confidence Survey shows companies expect the slowdown to worsen. The Business Confidence Index, or BCI, fell to 64.4 in the April to June quarter from 74.8 in the previous one, from January to March. Respondents to the survey - 500 CEOs and Chief Financial Officers across 12 cities - believe the business environment has worsened since April, primarily owing to the weakening of the macroeconomy. High interest rates and inflation have contracted demand. At the same time, input costs have gone up, squeezing profits.

Highly competitive industries are the worst hit. "Despite huge pressure from rising commodity prices and insane interest rates, we have not been able to push the rising cost on to consumers, which has further intensified pressure on the margins," says Mayank Pareek, Managing Executive Officer, Marketing and Sales, Maruti Suzuki India. For the car maker, inflation is a double-edged sword.

On the one hand, the cost of inputs such as natural rubber doubled in the past year. On the other, higher interest rates are deterring car buyers. So even as the revenues of Maruti Suzuki increased from Rs 28,958 crore in 2009/10 to Rs 36,128 crore in 2010/11, costs increased by 27 per cent and pulled down net profits during the same period from Rs 2,498 crore to Rs 2,289 crore Profit has come down as interest cost has gone up - Harsh Goenka, Chairman, RPG Group
The surge in commodity costs also put the brakes on SUV maker Mahindra & Mahindra's profit growth. In the January to March quarter, M&M's net profit rose just 6.4 per cent to Rs 606.5 crore, though revenue was up nearly 28 per cent to Rs 6,778.17 crore. M&M's operating profit margin declined to 13.78 per cent in the same period from 15.73 per cent in October to December 2010 and 16.22 per cent in July to September 2010.

In the first round of the survey that was conducted immediately after Budget 2011, the respondents had largely said that they expected the economic situation, sales and profits to improve in the April to June quarter. They were too optimistic. In the second round, nearly 65 per cent of the respondents told C fore their profit margins were turning out to be lower than in the January to March period. One in two respondents ticked the option 'rise in raw material and input costs' as the reason for lower profit margins compared to January to March, and attributed falling sales to 'high prices'. 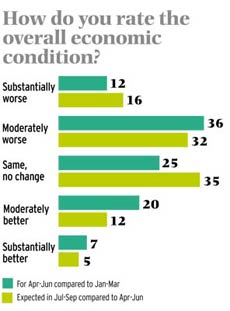 Click here to Enlarge
The sharpest drop in optimism was in the interest rate-sensitive heavy engineering segment and the smallest size companies surveyed in the first week of June, about a month after the Reserve Bank of India, or RBI, spooked the corporate sector with a steeper-than-expected half a percentage point hike in interest rates in its long-drawn fight against inflation.

Pawan Goenka, president, Society of Indian Automobile Manufacturers, or SIAM, and also president, Automotive Sector, M&M, told BT that he had expected a hike of a quarter of a percentage point at the most. The high interest rates and worsening confidence, said Goenka, "are taking a toll" as the auto industry's growth figures for April and May have been much lower than in the same months last year.

Indeed, for the 2,526 companies that had declared corporate results for the January to March quarter by early June, quarterly net profits were up only 14.6 per cent year-on-year in comparison to the 23 per cent rise in sales during the same period. In contrast, the October to December quarter had seen a robust profit growth of 24 per cent, and the quarter before that an even healthier growth of 39 per cent.

Reflecting the poor performance, the Sensex and the Nifty have been lagging behind their Asian peers since the beginning of this financial year, slipping 8.85 per cent and 8.71 per cent by June 29. 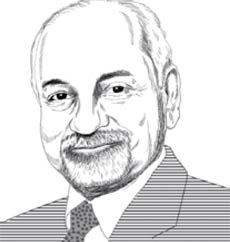 Industrial activity will pick up only by the end of 2011 - Ajay Nanavati, Managing Director, 3M India
The latest government data shows that GDP growth in the January to March quarter slipped to 7.8 per cent from 8.3 per cent in the October to December quarter of last year as industrial sector growth moderated to 5.3 per cent. Most economists expect GDP growth in 2011/12 to be below eight per cent. Finance Minister Pranab Mukherjee too announced on June 16, the day RBI hiked interest rates for the 10th time in just over a year - this time by a quarter of a percentage point - that growth in 2011/12 could be slower.

In the absence of a positive policy push from the United Progressive Alliance, or UPA, government, business confidence has dropped so much that barely 17 per cent of respondents told C fore they expect the overall economic condition to improve in the next quarter. Eighty three per cent said they expect cost of raw materials to rise in the quarter. Fewer than a quarter of the respondents expect sales to pick up in the next three months.

Ajay Nanavati, Managing Director of 3M India, which makes a diverse range of products, from median markers to surgical drapes, says barring any unanticipated external shocks or weak monsoons, industrial activity will start picking up only by the end of 2011.

Predictably, the going is tougher for price-sensitive markets. PepsiCo India is battling inflationary pressures through similar inward and outward measures. "We are working on ways to enhance productivity and cut costs.'' says CFO Kimsuka Narasimhan. "But if this situation continues, we might have to go in for selective pricing."

That is a choice not available to all companies - candy makers for instance. For decades, candies have stayed put at 50 paise a piece. This industry has been trying hard to get out of the 50 paise-price-stranglehold for some time, but, as Sameer Suneja, Managing Director, Perfetti Van Melle India, says, it "cannot risk losing consumers by tweaking ingredients that will alter the taste". The only option, with prices of sugar and milk defying gravity, is to drop weights as it did for CentreFresh like many other competing brands in the industry.

The only silver lining at the moment is exports. The trend in April and May shows that the demand for Indian gems and jewellery is better than last year, says Rajiv Jain, Chairman, Gem & Jewellery Export Promotion Council, and also Chairman and Managing Director of Sambhav Gems, Jaipur. "The same trend is expected in the next quarter."

Tefkot Cable, supplier of insulated wires to big companies such as Cummins Generator Technologies and Honeywell India, has seen its turnover jump to Rs 5 crore in 2010/11 from Rs 3.2 crore in 2009/10 but only because it increased prices following a rise in input costs. The hi-tech SME has managed to pass on the full input cost rise to its customers without losing market share as it enjoys a 20 to 30 per cent labour and machinery cost advantage over most foreign markets. "Business is good," says owner Jugal Kishore, but he is in a small minority.