The corporate sector's mood has deteriorated sharply. It feels there is little hope of the government or RBI's policies improving the gloomy economic scenario.

Puja Mehra
Doing business even in a thriving market can be frustrating - if inflation is sticky. Bangalore-based CS aerotherm manufactures ovens and other equipment for the fast-growing baking industry, and counts giants such as Britannia Industries, McDonald's and Amul among its clients. The Rs 25-crore company controls a fifth of the Indian market for such equipment.

Demand for ovens is "growing brilliantly," says Prasanth Jairam, CS aerotherm's export manager, who also handles the domestic market. But in the last couple of quarters, inflation has taken the rise out of the oven-maker's profit margins. Prices of electrical parts it uses have been increasing by 10 per cent every four to six months. 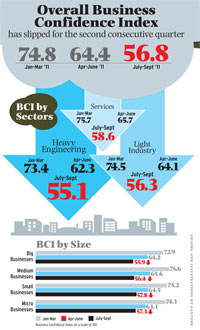 Click here to Enlarge
At best, says Jairam, he can increase selling prices by two per cent for every 10 per cent increase in input prices. But every time the company marks up prices, it loses some small customers - who account for up to 80 per cent of its clients and are the force behind the food industry's growth. "There is no way we can retain these clients," says Jairam. "We are feeding them to our competitors."

Even larger companies are feeling hot and sticky. Haryana-based Hero MotoCorp, India's largest manufacturer of two-wheelers, had increased the prices of its products five times during 2009/10 but has not marked up any model in the current financial year. Why? "Within 10 days of our price hikes, input prices would go up again," says Ravi Sud, Vice President and Chief Financial Officer, or CFO, of the cash-rich company, which accounts for nearly half of India's market. "It is an unending chase," he says. 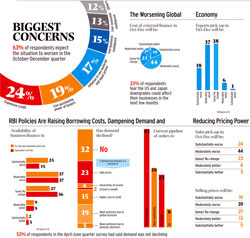 Click here to Enlarge
Headline inflation was over nine per cent in 11 of the last 12 months (it was 8.2 per cent in November 2010). "There have been spikes now and then, but I have not seen such sustained, elevated inflation in the last decade," says S. Raghunathan, CFO of Ayurveda and health care company Dabur India.

Inflation in the basket of commodities relevant to Dabur is growing at 10 to 12 per cent. The company has raised its product prices twice since April 2011 on an average by about 3.5 to 4.5 per cent. 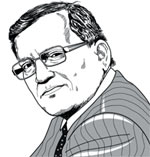 Some of our vendors have put their expansion plans on hold: Ravi Sud
Raghunathan says the markups - and reduced consumer spending power caused by inflation - have put volumes under pressure, although he declines to say by how much.

Respondents to the survey - 500 CEOs and CFOs across 12 cities - do not expect the business environment to improve any time soon. In fact, they expect it to worsen in the next quarter. They have already cut back on production and slowed down on investments. They have lost pricing power and their profit margins are thinner. They also expect exports to worsen and borrowing costs to rise, without any relief from input inflation. For the first time since it was instituted, the survey shows companies plan to go slow on hiring.

Better handling of the shock by policymakers can still prevent a cyclical downturn: Shankar Raman
"Because of fluctuations in global markets, a lot of financial institutions like banks have put their expansion plans on hold," confirms Sunil Goyal, Director of executive search firm Global Hunt. Hiring in the financial services sector, invariably the first to be hit when the stock markets go down, dropped by 25 to 30 per cent in the July to September quarter, he says. He expects it will fall further in the next quarter. "We are seeing hiring limited to replacements... and even complete freezes," adds Goyal.

Respondents do not expect even a single factor to turn positive. The pessimism is largely owing to the continuing policy paralysis. As many as 61 per cent of the respondents said they had no faith in the central bank's policies and projections on inflation. A still higher number, 65 per cent, gave the thumbs down to the United Progressive Alliance government's policies.

Finance Secretary R.S. Gujral, however, dismissed the despondency. "The government has announced several policies such as easier norms for external commercial borrowings, or ECBs, that should boost business sentiment," Gujral told Business Today. In the latest such move, the government has allowed infrastructure companies to raise loans in the Chinese currency renminbi.

To control inflation, RBI has raised interest rates 12 times since March 2010. This has cooled the economy: GDP growth in the last two quarters dropped below eight per cent. As the BT-C-fore survey shows, RBI has also succeeded in reducing the pricing power companies were enjoying.

Industrial output has been extremely volatile, but it is apparent that the growth momentum has been declining since March. Factory output grew a modest 3.3 per cent in July, the latest month for which data is available, mainly because of the deceleration in the interest rate-sensitive capital goods segment.

Predictably, the polled CEOs and CFOs picked cost of credit as the biggest concern, ahead of input price inflation. 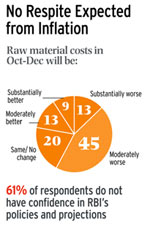 Click here to Enlarge
Despite robust demand, most companies have put investment plans on hold as they wait to see if the interest rates have peaked. "This situation is very similar to that in 2008 when interest rates were very high and liquidity was acutely short so capacity creation didn't happen," says Hero MotoCorp's Sud. "And, then, when demand exploded in 2009/10, capacity was short."

As a cash-rich company, Hero MotoCorp itself is less susceptible to the interest rates cycle, but Sud says it is getting affected indirectly because it depends on some 250 vendors. "Some of our vendors have put their expansion plans on hold either because of the weak investment sentiment or because they have no recourse to money," says Sud. "We will be impacted if, say, six months later, demand starts growing very fast."


Capital-intensive businesses are feeling the direct impact of high interest rates. Anil Ambani, Chairman of the Anil Dhirubhai Ambani Group, and Akhil Gupta, Deputy Group CEO and Managing Director of Bharti Enterprises, told global investors at the CLSA Investor Forum 2011 held in Hong Kong that they "wish to get the net debt/EBITDA... [down] before undertaking further projects," according to a note released by the global brokerage house on September 27.

Shankar Raman, Group CFO and board member at India's largest engineering company Larsen & Toubro, or L&T, reckons that the number of capitalintensive projects up for grabs is down by about a third since January 2011.

"The motivation to take a decision and move on to execution is not there," says Raman. "The concern is that finances might dry up midway or a project may become commercially unviable or whether it is worth waiting for the cost of funds to come off a bit."

Fewer projects mean increased competitive pressure and thus a lower win rate. So, if L&T was bagging, say, five projects earlier, it is winning only three now. Being in a long-gestation industry, a thinner pipeline means L&T's revenues will be affected a couple of years from now.

When will the outlook brighten? Respondents to the survey are not betting on quick relief. If projects remain suspended and profit margins get squeezed for a few more quarters, the danger is that what should have been just an economic shock would blow up into a cyclical downtrend.

"Better handling of the shock by policymakers can still prevent a cyclical downturn," says Raman. "Or in another two quarters, the economy will settle down into a new, lower norm - we will perhaps become a sixper cent economy!"