Business confidence, which had just begun to recover, took a fresh hit with the unveiling of Budget 2012/13, as corporate houses grappled with the uncertainty and the impact of the new tax policies, says Business Today-C fore's latest survey.

Shweta Punj
Business confidence, which had just begun to recover, took a fresh hit with the unveiling of Budget 2012/13, as corporate houses grappled with the uncertainty and the impact of the new tax policies . The New Year was to have been about new opportunities. There was hope that after a volatile 2011, 2012 would see the start of reform focused growth. But a year that began on a guardedly optimistic note has quickly slipped back into pessimism.
Read the survey findings here

Business Today-C fore's latest Business Confidence Index (BCI) survey, which sought responses from 500 chief executives and chief financial officers across 12 cities, shows a minor improvement in business sentiment, compared to the last quarter of 2011. (See www.businesstoday. in/bci3-2012 ). The BCI for the January to March 2012 quarter is 55.4 on a scale of 100, marginally higher than it was for the October to December 2011 quarter - 52.3. However, it is still way below the 74.8 mark of the first survey, in January-March 2011. Click here to Enlarge
But after Budget 2012/13, the mood is threatening to turn bleak again. The survey has 61 per cent of the respondents saying the Budget would have no impact on their company's performance in the April to June quarter, while 24 per cent said it would make things moderately worse.

Proposals such as the provision for retrospective amendments to income tax laws, the General Anti-Avoidance Rules (GAAR) and the hike in service tax and excise duty, together with the absence of any substantial measure seeking fiscal consolidation, have left industry deeply disappointed.

Not surprisingly, the outlook for the April-June 2012 quarter is somewhat grim. Nearly 44 per cent of the respondents said they expected sales to drop further during this period, while 49 per cent were certain that they would see no change in their profits. Almost 59 per cent said the economic prospects for their specific business would worsen, while 62 per cent said the overall economic situation was set to slide. The silver lining is that if inflation stabilises, we could see rate cuts this year and that would boost investment: D.K. Aggarwal
The financial year that just ended was undoubtedly a tough one. In its latest report on April 3, credit rating agency CRISIL says the annual default rate of the entities on its radar touched a 10-year high of 3.4 per cent in 2011/12. There were 188 defaults in all, the highest ever in a year. "Weak liquidity caused by elongation of working capital cycles is the primary reason for the defaults," says Roopa Kudva, Managing Director and CEO, CRISIL, in the report. "This trend is likely to persist with slowing demand." India's ballooning fiscal deficit, 5.9 per cent of the gross domestic product (GDP) in 2011/12, is a daunting concern the Budget has done little to allay.

"We are looking at 2012 with extreme caution and a prayer on our lips," says Rajiv Kumar, Director General of the Federation of Indian Chambers of Commerce and Industry (FICCI). Many worry that the fiscal deficit might eventually be higher than the targeted level of 5.1 per cent for 2012/13. "It is a concern if high fiscal deficit is not addressed," says Ramesh Swaminathan, Chief Financial Officer of pharmaceutical firm Lupin. "But if it is addressed it could lead to an increase in prices." 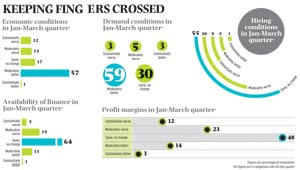 Click here to Enlarge
Fiscal consolidation is closely linked with the cost of financing which businesses say has been hurting their competitiveness for almost a year. Among respondents to the survey, 45 per cent expected the cost of external finance to get moderately to substantially worse, while 47 per cent said it would stay unchanged. Some feared the rupee could depreciate again as it did in 2011. "The balance of payments situation is pretty alarming," says Swaminathan. "There has been a dip in the last quarter, which means the rupee is going to depreciate. That means imports are going to get expensive."

The two percentage point increase in both service tax and excise duty announced in the Budget has provoked fears of inflation which could dent demand. Like many other sectors, real estate, going through a difficult patch, faces a dilemma. 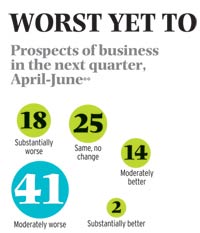 Click here to Enlarge
"If an affordable apartment's cost is currently Rs 17 lakh, its end price will go up by five per cent straight away," says V. Madhu, Managing Director of Bangalore-based realty company, Provident Housing Ltd. "But we risk losing the demand if we pass on all costs to customers. So we will try to absorb part of it in our margins."

The business environment is going to get tougher. "I am not sure where the growth impulses will come from," says Kumar of FICCI. "Things are not looking good." 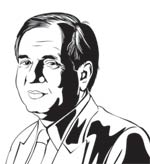 We are looking at 2012 with extreme caution and a prayer on our lips: Rajiv Kumar
Some optimists, however, maintained the economic scenario could improve in the latter part of the year. "From the third quarter of this calendar year, the economy will get a boost," says D.K. Aggarwal, Chairman and Managing Director, SMC Investment and Advisors. "We will see rate cuts and that will boost confidence and investment."

Click here to Enlarge
But rate cuts will depend on inflation stabilising, of which there is no sign yet. Finance Minister Pranab Mukherjee indicated in his Budget speech that the government would be comfortable with six per cent inflation.

The wholesale price index rose by 6.95 per cent in February. Though the consumer nondurable goods sector is still growing robustly - 41.1 per cent in January this year compared to the same month a year ago - most other economic indicators have been subdued. Industrial output data for January shows the capital goods sector shrank 1.5 per cent in the same month. Even so, this was an improvement over December 2011, when it saw a decline of 16.3 per cent. GDP growth estimates are repeatedly being scaled down, and the current view - with final figures still awaited - is that India will have grown at 6.9 per cent in 2011/12. That is quite a comedown from the start of the financial year, when the growth projection was nine per cent.