For the second successive quarter, optimism has risen from the nadir of mid-2012, finds the latest Business Today-C fore Business Confidence Survey.

Shweta Punj
It has been a year of several unforgettable lows for India. Economic growth in the April-September months of 2012 fell to 5.4 per cent from an average of eight per cent in the last decade.

Retail inflation hovered at close to 10 per cent and interest rates stayed high. The twin deficits - fiscal and current account - widened, global ratings firms threatened to downgrade the country's debt, and businesses held back investments. But sentiment seems to be reviving now and there is a sense that the worst may have been tided over. Click here to Enlarge
The Business Today-C fore Business Confidence Survey for the October-to-December quarter of 2012 found that economic conditions had picked up thanks to higher demand, leading to better profit margins for nearly half the businesses surveyed. On a scale of 100, the confidence level is at 53.8 in the last quarter of 2012, up from 52.4 in the previous three months, and well above the level of 49.3 it was in the three months before that. The outlook for the first quarter of 2013 looks encouraging with 31 per cent of respondents expecting the economic situation to improve against 27 per cent who think it will get worse. The confidence level has improved because the government has started taking reform-oriented measures: Adi Godrej
Business Today started the business confidence survey in 2011. From a high of 74.8 in the quarter ending March 2011, confidence declined steadily, and picked up only in the first quarter of 2012, ahead of the budget.

But confidence levels plunged again in the April-to-June period, after Pranab Mukherjee, then Finance Minister and the current President, proposed general anti-avoidance rules (GAAR) in the Budget, as well as rules to retroactively tax overseas mergers and acquisitions of Indian assets.

So what has changed in the past few months? What is driving this optimism? 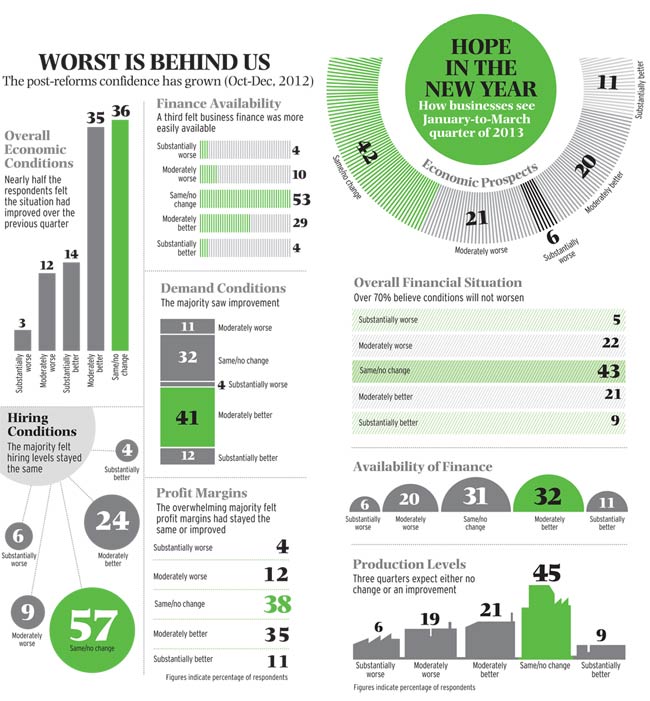 Click here to Enlarge
The tax rules hurt India's image as an investment destination, prompting the government to go into damage control as soon as Palaniappan Chidambaram took charge as finance minister in early August. Chidambaram set up a committee led by renowned tax expert Parthasarathi Shome to revisit the controversial rules. The Shome panel has recommended that mergers and acquisitions should not be taxed retroactively and that GAAR be postponed by three years.

"The Shome committee's recommendations have improved perceptions about India," says Adi Godrej, President, Confederation of Indian Industry (CII), and Chairman of the Godrej Group. "The level of confidence has improved because the government has started taking reform-oriented measures." The euro zone has managed to resolve some issues. The US economy is coming back, and China is also looking better: Naina Lal Kidwai
The government got more work done in the last three months of the year than in the previous nine. The Union Cabinet passed amendments to the Land Acquisition Bill and cleared a proposal to set up a Cabinet Committee on Investment with the Prime Minister as chairman to expedite project approvals.

The Lok Sabha and Rajya Sabha cleared the Banking Laws (Amendment) Bill, 2011, which will allow the Reserve Bank of India to grant new banking licences and attract more foreign investment in the banking sector. Global factors also contributed to a renewed sense of optimism. "The euro zone has managed to resolve some of its issues. The economy in the United States looks like it is coming back, and China is also looking better," says Naina Lal Kidwai, President of the Federation of Indian Chambers of Commerce and Industry (FICCI), and country head of HSBC India.

While overall confidence among big business houses appears to be recovering, almost all small- and medium-scale enterprises Business Today spoke with remain pessimistic and say they are still trying to cope with hostile business conditions. Most critical is the progress on the land acquisition bill and the Cabinet Committee on Investment: D.K. Joshi
"Interest rates are hell. They are killing us. We pay 13 per cent interest on short-term loans; China pays about six per cent. It's difficult for us to plan anything because there is no consistency in India's export policy," says Pradeep Aggarwal, Director at bicycle gear exporter Spark Engineering. He says sentiment among exporters is muted because of high interest rates, policy uncertainties at home, high commodity prices, and sluggish demand from the US and Europe.

Rakesh Shah, Director at Kolkata-based Nipha Exports, a manufacturer of agriculture tillage tools and cotton processing machines, says 2012 was the second consecutive year of near-zero growth for the company. Shah, who is also Chairman of the Engineering Exports Promotion Council, says Nipha had planned two projects but has postponed their implementation. "We are deferring the projects by three months or so to get a clearer sense of domestic policy and how the global economy shapes up."

M. Lokeswara Rao, Managing Director at Hyderabad auto component supplier Lokesh Machines, says demand fell about 20 per cent in 2012, even as commodity prices kept climbing. The company's revenue for the April-to-December period of 2012 decreased to Rs 110 crore from Rs 130 crore a year earlier.

Though high interest rates remain a problem for most businesses Business Today spoke with, interestingly, nearly two-thirds of the respondents to the survey felt that the Reserve Bank of India's monetary policy would not impact their companies' performance.

The survey shows also that 42 per cent of the respondents expect the government's reform steps to benefit their companies. While policy watchers do not expect a significant uptick in private investments even in 2013, there is some confidence that the investment pipeline could revive if problems related to land acquisition and regulatory clearances are resolved. "Most critical is the progress on the land acquisition bill and the Cabinet Committee on Investment," says D.K Joshi, Chief Economist at ratings firm CRISIL.

With the government constantly emphasizing the need for tough decision-making - it raised rail passenger fares on January 9 for the first time in 10 years - there is clearly more optimism for the year ahead. Macro-economic indicators are expected to improve as well. Inflation is likely to ease to around six per cent and interest rates are set to fall; economic growth is projected to accelerate to between 6.5 and 6.9 per cent, according to global brokerage Credit Suisse. But with general elections in 2014, whether the government will take more economically sound decisions is what is on everyone's mind. Keep your fingers crossed.