Shweta Punj
When in trouble, we pray. Prayers might be in order now with business confidence levels among Indian corporate houses having slumped to a new low. Helplessness and pessimism are the pervading sentiments as companies hold back investments and go slow on hiring. Click here to Enlarge
The latest Business Today-C fore survey - for the April to June 2012 quarter - shows that the Business Confidence Index (BCI) has slipped below the 50 mark for the first time since we started the quarterly surveys. It stood at 49.3, far below the 74.8 level in the first survey for January to March 2011.

The findings are not really surprising. India's wobbly macroeconomic indicators - inflation at 7.55 per cent in May, industrial production at 2.4 per cent in May, and growth at 6.5 per cent for the fiscal year ended March - are almost a throwback to the country's preliberalisation past that most would like to forget.

"Ideally, what is inflation should be growth and what is growth should be inflation," says D.K. Joshi, Chief Economist at ratings firm CRISIL. Inflation at elevated levels and a falling growth rate has led to concerns of stagflation, though that may be alarmist as yet, since stagflation implies a high inflation, zero-growth scenario. "We are in a stagflation-like situation," says Joshi. Click here to Enlarge
Industry leaders say rising costs and slowing growth are both major concerns. Nearly 83 per cent of the 500 CEOs and chief financial officers polled for the sixth business confidence survey expect raw material costs to rise in the July to September quarter, while 49 per cent said they do not expect their selling prices to pick up.

Industry, which did not seem too troubled by inflation a year ago as it was able to pass on higher input costs, is now in a bind as growth in consumption demand shows signs of petering off. Businesses have been absorbing increased operating costs for nearly two quarters, and that is beginning to tell on profit margins.

This is an extremely unfortunate phase where the country is over-regulated and clearances for projects take years: Navin Raheja
Nearly 53 per cent of respondents reported crunched profit margins for the three months ended June, and 57 per cent expect profits to fall further in the current quarter. According to an estimate by the Confederation of Indian Industry (CII), operating margins for a broad sample of companies shrank to about 18 per cent in the quarter ended March 2012 from about 20 per cent a year earlier.

As profit margins get hurt, companies hold back on expansion. India's investment rate has been falling since it reached a peak of 38 per cent of gross domestic product (GDP) in 2007/08. That is beginning to show up in a gloomy outlook on hiring - 53 per cent respondents expect recruitment to slow down in the July to September quarter. For a closer look at the hiring outlook of Corporate India.

Click here to Enlarge
"This is an extremely unfortunate phase where the country is over-regulated and clearances for projects take years," says Navin Raheja, Managing Director of real estate developer Raheja Group, blaming a policy paralysis for the negative sentiment.

Raheja says demand would have been better if the cost of raw materials had not doubled in the last three years. "Cement, steel and labour now cost 50 per cent more than what they did three years ago," he says. High interest rates, delays in approvals, and uncertainty over land acquisition policies are further hurting demand in real estate, and overall business sentiment as well. 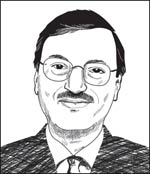 More than 80 per cent of the executives polled did not expect demand to pick up in the July to September quarter. Nearly 45 per cent respondents said they expected the overall economic situation to worsen.

"Going back to nine to 9.5 per cent growth rate is not possible in the short term," says CRISIL's Joshi. Some are, however, a little more optimistic. Nearly 60 per cent respondents do not see a change in production levels over the July to September period, suggesting that, while outlook may be gloomy, business conditions are not alarming.

For consumer goods maker Marico Ltd, the impact of a slowing economic environment has "not been significant so far," says its Chief Financial Officer Milind Sarwate. "Usually in times of economic downturn we do not see a direct fall in demand, but deceleration in growth and downtrading," he says.

'Downtrading' is a trade term for the phenomenon of customers switching to cheaper products. Yet even a gloomy outlook can be an opportunity for some. Cycle Pure Agarbathies, India's largest incense stick maker, says the increasing demand for its product is compensating for higher input costs. "In the past one year, operational costs have increased 30 per cent - wages alone have gone up by a quarter. Click here to Enlarge
While these have hurt us, the market for agarbattis is expanding," says Arjun Ranga, Managing Director. Cycle Pure Group exports incense sticks to 60 countries.

Overall, businesses want a host of policy initiatives such as implementation of the Goods and Services Tax (GST), opening up the multibrand retail sector for foreign investment, putting infrastructure projects on a fast track, and cutting interest rates.

They are also keenly watching which way the monsoon winds will blow. So far the rains this year have been well below normal . A poor monsoon could further exacerbate inflation and aggravate the stagflation-like situation. "Production could take a hit if domestic demand moderates on account of factors such as a weak monsoon and further increase in prices of food products," says CII Director General Chandrajit Banerjee. But will everything be the same when it starts to rain?

With inputs from K.R. Balasubramanyam