In the third edition of the BT-Morningstar Asset Allocation Survey, nearly half of all fund managers expect the Sensex to hover between 18,000 and 20,000.

<em>Photo: Reuters</em>
Mahesh Nayak
At the beginning of this year, Mrinal Singh, Fund Manager at ICICI Prudential Mutual Fund, was bearish on Indian equities. Not any more. Today he is considering doubling his equity allocation.

"Equities have corrected, and attractive valuations are purely the reason for me to turn positive," he says. "From a 20-25 per cent equity allocation, I would have 50 per cent invested in equities, with the remaining 30 per cent in debt and 20 per cent in other asset classes such as real estate and gold."

He is betting on sectors such as banking, auto ancillaries and infrastructure. "If you are betting on India's growth, these sectors must perform, otherwise it makes no sense to invest in the markets," he says. Like most fund managers, Singh says he believes the government is still pushing for reform and trying to bring the battered Indian economy back on track, belated as the efforts may be.

Jaideep Bhattacharya, Managing Director at Baroda Pioneer Mutual Fund, has increased his fund's exposure to equities from 50 per cent to 65 per cent, and added overseas equity funds to its list. Over the next year, 71 per cent of fund managers who responded to the third BTMorningstar Asset Allocation Survey see the US as the market most favoured by institutional investors globally.

"Though uncertainty remains, and the Indian market will be driven more by events, there are fewer options for investment," says Bhattacharya. "With consumer price inflation in double digits, investing in equities can help." Like 46 per cent of fund managers surveyed, he expects the Sensex to move between 18,000 and 20,000 over the next year.

The mood is not bullish, but it's not negative, either. Three months ago, there was guarded optimism amid the gloom on the street, and now the fog seems to have cleared a little. Sandeep Shenoy, Executive Director -Institutional Equities at Anand Rathi Securities, told Business Today recently: "Most of the bad news - even the tapering of the QE - is factored into the price, and things look much better than before. But will I be a buyer across the board? The answer is no. I will stick to value and pick stocks of companies that are generating positive cash flows." He was speaking shortly before September 18, when the US Federal Reserve announced that it would delay a tapering of its quantitative easing policy, aimed at supporting the economy. The Fed's decision lifted markets worldwide. 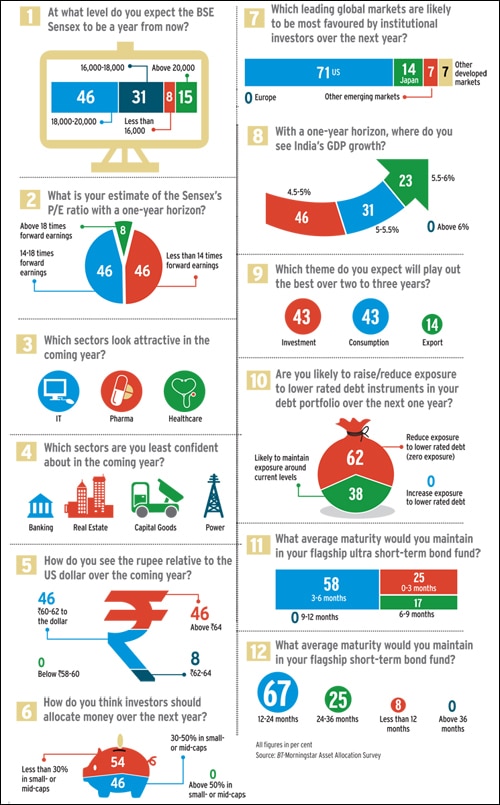 Click here to Enlarge
Though fund managers see the equity market remaining range-bound, they don't see much happening in the Indian economy. Nearly half of them expect GDP to grow at 4.5 to five per cent. Ninetytwo per cent expect the fiscal deficit to be between 4.5 and 5.5 per cent. There is also a broader expectation that wholesale price inflation will come down: in the previous survey, 69 per cent of fund managers expected inflation to be seven to eight per cent at the end of 2013, but that figure in the present survey is only eight per cent. Ninety-two per cent see inflation at five to seven per cent.

Interestingly, 36 per cent of fund managers have a positive outlook on gold, up from 9.1 per cent in the previous survey. However, the majority (43 per cent) still maintains a neutral position.

There is a widespread expectation that crude oil prices will stay more or less where they are - 69 per cent of respondents see them at $100-110 a barrel.