Can this marriage work?

Kingfisher and Deccan are like chalk and cheese, with different operating philosophies and different target segments. The two airlines have different business models and cater to different passenger segments. What, then, is the rationale behind their merger? Kingfisher in Europe & US, Deccan in Asia: Mallya Kingfisher to fly abroad this year: PatelWind under their wingsBeyond the horizon 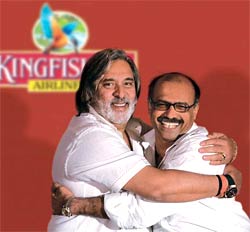 Vijay Mallya (L) & G.R. Gopinath
It’s a piece of news that has brought considerable relief to the Indian aviation industry and caused great consternation among the flying public.

When liquor and aviation baron Vijay Mallya first acquired low-cost carrier (LCC) Air Deccan and then decided to merge his full service Kingfisher Airlines into it, the big daddies of the Indian skies—read: Indian and Jet Airways—must have heaved a collective sigh of relief.

Reason: Mallya declared soon after taking over Air Deccan (since renamed Deccan) that the days of offering unviable fares to passengers were now over. But the big question now is: can the merger work?

Kingfisher and Deccan are, prima facie, as different as chalk and cheese, or, as Capt. G.R. Gopinath, founder and erstwhile Chairman of the upstart airline, and Vice Chairman designate of the merged one, once famously put it: “We’re from Mars and he (Mallya) is from Venus.”

The two airlines have different business models and cater to totally different passenger segments. Mallya, however, is confident that he will be able to tap synergies and make the marriage successful, but that will take a lot of nifty footwork and considerable pain.

Cat among the pigeons The arrival of Deccan led to this falling to Rs 2,500. As LCCs like SpiceJet, Indigo and others sprouted and followed Air Deccan’s lead, even full service airlines were forced to cut fares to stay in the business.

Result: domestic air travel really took off; the number of passengers flying within the country jumped from 29.2 million in 2003 to 90.44 million in 2006.

The flip side: the airline industry was awash in red ink, and collectively incurred losses of Rs 2,000 crore last year; Deccan, in particular, bled Rs 426 crore during the six months ended September, 2007.

Kingfisher was not far behind, with losses of Rs 350 crore during this period.

UB Group executives squarely blame Deccan for this state of affairs. They point out that while Deccan’s cut rate and unviable fares even during peak hours ensured that it flew near-full, the premium Kingfisher (and some other airlines, too) took off near-empty in the afternoons.

“The industry was fast losing its pricing power, and to that extent, it would have destroyed every airline,” says Kapil Kaul, CEO, (Indian Subcontinent and Middle East) of Centre for Asia Pacific Aviation (CAPA), a leading aviation consultancy firm.

The first, and obvious, benefit from the merger will accrue to the entire domestic aviation industry. Mallya’s initiatives, analysts say, will not only help Kingfisher and Deccan stem their losses, but also improve the fortunes of other airlines.

SpiceJet Chairman Siddhanta Sharma agrees. “I welcome the merger because when you have financially weak players, there is price dilution. The weaker players pay more attention to cash generation than profitability, and that brings down the overall financial health of the industry.” Mergers in the aviation industry, he adds, will bring about financial discipline among the players. “The airline industry is ripe for consolidation,” agrees Kaul, adding that the merged company should not go for domestic expansion for the next 12 to 18 months.

Reason: while the growth in traffic during April-September 2007 was a healthy 35 per cent, the growth in capacity was higher at 39 per cent. And this gap is expected to widen when the pending deliveries of about 250 planes ordered by various domestic airlines arrive in the country by 2011.

Therefore, it comes as no surprise that Mallya is planning to reduce the number of Airbus A320 planes he would have received shortly from 18 to eight. He has also reportedly swapped some of his 80-odd A320 delivery slots with Air Qatar to get expedited delivery of the Airbus A380 Super Jumbo. Given that trading in delivery slots takes place at $1-2 million (Rs 4-8 crore) a pop, the combined airline stands to make a fairly nice packet from this.

And as things stand now, the merged airline will become eligible to fly on foreign routes in June 2008 when Deccan completes five years of operations—hence, Mallya’s interest in it. There is, however, a move afoot in some quarters to replace this five-year rule with criteria based on profitability.

A Group of Ministers, headed by Foreign Minister Pranab Mukherjee, was due to take a call on this at a meeting on January 3, but this has now been rescheduled to January 10. But BT learns that a consensus is emerging in favour of retaining the five-year criteria. The other compelling reason behind the merger is the potential for huge savings from cost synergies, route rationalisation and bulk purchase deals.

A closer look at the two airlines reveals that except for the conflicting nature of their business models, the two carriers don’t seem to have any other legacy issue.

Mallya says that following the merger, both brands will retain their independent identities—Kingfisher targeting the premium and normal fare segment and Deccan serving budget travellers. Says Gopinath: “I see no reason for Mallya to want to dilute that brand equity.”

Analysts say that there is basis for optimism. The new airline, with 600-plus flights a day and a large network of 70 destinations is valued at an estimated Rs 5,000 crore, according to Kaul.

The UB Group hopes to save around Rs 250 crore annually as a result of combined operations and higher revenues, and turn profitable by the end 2008-09.

The savings, according to KPMG Senior Advisor Mark Martin, will primarily come from maintenance as Kingfisher and Deccan operate similar types of aircraft.

“Their pilots are type-rated on the same type of aircraft and both airlines can share their crew. Besides, the marketing network created by Deccan will be available to Kingfisher and vice versa.’’ Then, route rationalisation will allow it to pare down the plan to acquire over 100 new planes, thus, resulting in massive savings.

The combined airline will integrate critical departments like maintenance, flight operations, cabin crew, airport terminal services and marketing support and also gain from each other’s slot allocations and access to airports. It will have better negotiating power in bulk purchases, too, Martin explains.

The sector is witnessing a phenomenal growth in traffic, says KPMG Executive Director Raajeev Batra, as people gradually change their approach to air travel. “It’s a deeply entrenched middle-class Indian mindset not to use air transport.

But we triggered a change, and introduced fares that the common man could afford,” says Gopinath, whose carrier has flown 15 million people so far. “Norway, with a population of five million people, sells 20 million air tickets a year. But even after the boom over the last decade, the Indian aviation industry serves only 2 per cent of the population,” he says.

Therefore, much like the telecom industry in the mid-to-late 1990s, there is clearly massive headroom for the industry to grow exponentially in the years ahead. And Kaul sees a huge opportunity for the combined airline to ride this growth; its near 30 per cent share of the Indian market will also give it significant pricing power.

“The benefits of the merger will begin to kick in about seven months from now. The new company can have one back end and two front ends (for the two brands). Once it creates one back end, it can straddle the entire spectrum of air travel— from premium to low-cost. But retaining the differentiation will be critical and strategic.” Mergers, he warns, always look good on paper, but their success lies in execution.

Some airline buyouts abroad and the synergies they unleashed offer some comfort. Batra gives the example of Emirates Airlines, which acquired a majority stake in Sri Lanka’s national carrier Air Lanka, since renamed Sri Lankan.

The acquired carrier offered Emirates Airlines an outstanding reach into the South East Asian market while, at the same time, feeding onward traffic to Emirates at its hub in Dubai.

The merger and the consequent beefing up of its domestic operations couldn’t have come at a better time for Kingfisher Airlines, which will almost certainly incur losses in the initial years of overseas operations, which it plans to launch this year.

The international market (both outbound and inbound), though growing at a healthy 17 per cent per annum, is already crowded and foreign airlines fly two-thirds of Indian passengers. But analysts say the long-term prospects are reasonably good. “In the aviation space, we are positive about both Jet Airways and the merged Kingfisher Airlines,” says Nikhil Vora, MD, SSKI Securities. Sandeep Shenoy, Head of Strategy at brokerage firm Pinc, expects the combined company to break even in the first quarter of the next financial year and turn profitable two quarters after that. He feels investors should stay invested over the long term for appreciation in the stock.

The fine print of the merger

Deccan is a listed company; Kingfisher Airlines is not. However, that will change once it is merged into Deccan before the end of this financial year. And though the swap ratio has still not been decided, Mallya is expected to hold over 70 per cent in Kingfisher Airlines, as the merged airline will be called.

Then, the air charter service that the company also runs will be spun off into a separate entity, called Deccan Aviation. Gopinath, who will be non-executive Vice Chairman of Kingfisher Airlines after the merger is complete, will head Deccan Aviation as its Chairman.

Years ago, Gopinath changed the rules of the Indian aviation industry and rudely woke up the established players with his innovative pricing policies. Following the merger between Kingfisher and Deccan, the Indian skies will resemble a near triopoly; the three large players—Air India-Indian, Jet Airways-JetLite and Kingfisher Airlines—will control over 80 per cent of the market. Will this mean an end to the low-cost dream?

KPMG’s Martin does not think so. The lowcost regime will not end so long as there are players like GoAir, SpiceJet and Paramount around. “The lowcost airline business is basically a model and there will be enough room for all the existing players plus a few more. Regional airlines will also come up soon to cater to shorthaul fights that cover distances of 300-500 km,’’ says Martin.

The bottom line: Mallya’s gambit may result in a win-win situation for both airlines. And passengers? That’s another story.