Once the world's third-largest software company, Computer Associates is betting big on India to get its mojo back. 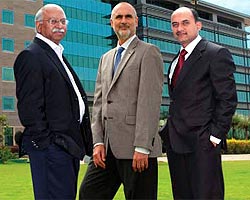 (From L-R) Saurabh Srivastava, Will Bauman and Amit Chatterjee in front of the India Technology Center (ITC) in Hyderabad

Julia Montgomery is frequently stopped on the streets of Hyderabad by Indian women offering a compliment on how good she looks in a saree. She often picks up a tip or two on how best to wear it. And guess what: Montgomery (a white American) thinks Indian women are the smartest for they can wear comfortable clothes at work. Her experience with the saree is not too different from that of her husband Will Bauman—whose -employer is the $4.2-billion software giant CA (formerly Computer Associates), which is embracing the country with as much élan.

CA? What's that… Well if the name doesn't quite ring a bill—or, perhaps, not as loud as it would have in the early 2000s—it's not without reason. Once the world's third-largest software company, CA lost its pride of place ever since it got bogged down by allegations of insider trading. That eventually led to the exit of its high-profile Sri Lankan Chairman & CEO Sanjay Kumar in 2004. A new team largely comprising former IBM officials, led by President & CEO John Swainson, slowly but surely took over at CA, which is when it earned the sobriquet of the world's largest startup. It's #10 now in terms of software revenues, but is the top independent IT management company.

CA is now counting heavily on India to to regain its place in the sun. Soon, 15 per cent of its employees worldwide will be from India. "India is a glass that's half full—in fact, there are many glasses here that are half full and that's how we see India," says Bauman.

Bauman is the Senior Vice President & General Manager for CA in India and is one of a troika that runs the multinational's ambitious India engagement plan. Bauman runs the Indian Technology Center (ITC) of CA in Hyderabad, which, in a couple of years, will be CA's largest technology centre anywhere in the world. While Bauman started his India stint in February 2009, two seasoned Indian professionals came on board months later. First, in April veteran entrepreneur and angel investor Saurabh Srivastava was brought in as Chairman; a month later Amit Chatterjee, HP Software's Head of Alliances across Asia-Pacific, joined up as Managing Director for India in May. The mandate was clear-cut: Leverage India for CA.

Srivastava, one of the co-founders of IT services industry body NASSCOM, has a unique role as Chairman of CA India. He comes in as a mentor from the first day. "We are not in India just to sell our software. It is a much bigger goal. If you look at CA India today, it is almost a mirror image of CA USA. Not in size, but whatever we do in the US, we also do in India. It is not true of CA in any other market in the world." CA, headquartered in Islandia, New York, is the biggest player in the world in large-scale enterprise software, especially in security and mainframes. It's also been holding its own in the downturn; globally, the company reported no decline in sales in the last fiscal and has stated that it wants to invest in the downturn. A lot of that will happen in India. The company is investing in technology, innovation and acquisition of new technologies. CA's investment in ITC will touch $60 million by mid-2010.

CA also wants to sell its products — like its applications management tool Wily and its identity access management software IAM—in India. Srivastava sees a clear opportunity in the government's aam aadmi focus. "As the (state) governments try to fix what is broke in public services, leveraging IT will be at the top of their minds. CA wants to partner in e-governance in India." To know India better and to do more business in India, CA India is starting an internal programme codenamed 'Indigo'.

Chatterjee has fixed a goal of growing by 50 per cent every year in India for at least the next two years. "Apart from governments, there are the new telecom players (who could be our clients)." He is hiring 15 senior professionals in the next few weeks to beef up his sales team. "CA India is the only CA unit that is demanding investments and promising growth," adds Chatterjee, who also manages sales in Bhutan, Bangladesh and Sri Lanka from India.

Srivastava's background as an angel investor and venture capitalist ties in well with CA India's mandate to hunt for technology companies that are ripe for acquisition. Historically, CA has grown through acquisitions throughout the world. However, in India, the company is chasing complementary technologies rather than just growth for the sake of it. And Srivastava with his deep network of venture capitalists—he is the Chairman of the Indian Venture Capital Association—is the ideal person to dig out such candidates.

As Srivastava dons multiple hats (he had started IIS Infotech and then merged it into Xansa in 1998), he is the ideal person to help CA make the best of its India initiative, feels Pradeep Gupta, Chairman & Managing Director, Cyber Media (India) Ltd. Gupta has known Srivastava for decades now. "Be it government contacts or contacts with the Indian software biggies or knowledge about what's the latest in the start-up world in India, Srivastava is an ideal fit for CA's agenda in India," adds Gupta.

While the sales push spearheaded by Chatterjee and the engagements being worked out by Srivastava are the multicoloured icing sugars, the real cake is being baked in Hyderabad under the guidance of Bauman. Almost echoing the sentiments of Srivastava, Bauman says: "Hyderabad is a mini-Islandia. All the seven business units of CA are represented in our technology centre in Hyderabad."

Bauman, who took over from Lokesh Jindal (an old CA hand, who has now gone back to CA USA), has seen CA India through a critical phase. Last year, when the company moved ITC from Chennai to Hyderabad, there were issues of attrition as not everyone made the move. Result? A drop in performance. But Bauman claims that CA India has come back well. The proof of the pudding: "In the March 2009 quarter, we won the award for the most improved team; in the next quarter, the team was challenged to aim for the best support centre award and we won it. It is an award that is normally won by the headquarters," says Bauman.

He has the mandate to get the most out of this centre now. It is leading him to get more and more product managers and product architects to be based out of Hyderabad. In July, the US patent office granted the first patent filed from this centre (17 have been filed so far). In innovation projects, one idea proposed by the Hyderabad centre is set to get funded by CA's innovation fund.

Clearly, CA has a lot going of it in India. "CA is a case study of how a company remade itself on the go," says Srivastava. Chatterjee points out that CA has now been placed in the prestigious Magic Quadrant by consultant firm Gartner that indicates both leadership and vision. Bauman has plenty of reasons to smile, including this one. "My wife—who does volunteer work teaching English at the CA Hope School in Hyderabad—is happy in India, and that's 90 per cent of the battle won."