Millions of Indians are grappling with the costs of cancer treatment

Millions of Indians are grappling with the costs of cancer treatment, sometimes spending their life's savings on it.

A 10-year-old girl undergoing radiation therapy for a brain tumour at New Delhi's Apollo Hospital
Salumuri Sri Venkateswara Rao had been suffering from a nasty cough for days. But the 50-year-old construction manager in Dubai ignored it because he did not think it was anything serious. When the racking cough refused to go away, Rao finally went to a doctor who prescribed a cough syrup. A few days later, he felt a constriction in his throat and could not eat normally. Rao went to Abu Dhabi's Ahalia Hospital, where doctors said he might have cancer. "This came as a big shock as he had all along been thinking it could be nothing worse than a throat infection," says M. Nagarjuna, Rao's son-in-law.

Last October, Rao headed for India and went through a battery of tests at Hyderabad's Omega Hospital. The final diagnosis: he had non-Hodgkin's lymphoma, a cancer that predominantly affects the lymph nodes and thereby the immune system.

Rao was mentally prepared for the worst by then, but what he was not ready for was the astronomical cost of treatment. Two months and four chemotherapy cycles later, he had already forked out Rs 5 lakh and expects the final bill to touch Rs 10 lakh. The costs include a lymph node biopsy, a bone marrow test, an endoscopy, a PET scan, special anticancer drugs and six cycles of chemotherapy.

Each chemotherapy sitting costs Rs 90,000. "It began as just a routine cough. How could I have known?" asks Rao. "We decided to encash our savings in fixed deposits, bonds and rely for some expenses on the credit card." A 10-year-old girl undergoing radiation therapy for a brain tumour at New Delhi's Apollo Hospital. Photo: Vivan Mehra/www.indiatodayimages.com
Rao is one of millions grappling with the prohibitive cost of cancer treatment in India, where the disease has wiped out entire life savings and even forced some people to sell their homes. Although relatively cheaper than in the West, cancer treatment is still unaffordable for poor and middleclass Indians, who often do not have health insurance. "Cancer care can get hugely expensive if it is detected late, or if the screening is not proper and if the treatment is not right the first time," says Dr B.S. Ajaikumar, founder and Chairman of the Bangalore-based Healthcare Global chain of hospitals. "It could cost as low as Rs 2.5 lakh for six months of treatment, with some of the lowestpriced generic drugs in the world, to as high as Rs 20 lakh, with novel drugs and targeted medicines."

Why is cancer treatment so forbiddingly expensive? The main reason is the staggeringly high cost of equipment and setting up a cancer hospital: doctors estimate a 100-bed cancer speciality hospital would need an investment of up to Rs 100 crore, excluding the cost of land in most cases.

Hospitals have to pay a fortune for imported equipment. For example, a linear accelerator, which is used for radiation therapy, costs around Rs 10 crore, plus an import duty of around Rs 1 crore. Similarly, a PET CT scan machine, used to pinpoint the location of cancers, is anywhere between Rs 3 crore and Rs 6 crore. The costliest is a CyberKnife used for radiotherapy which costs around Rs 30 crore. Apart from equipment, cancer treatment medicines are expensive. Dozens of people from little children to the elderly wait for checkups outside AIIMS hospital in Delhi. Photo: Aditya Kapoor
Some breast cancer patients, for example, need targeted treatment drugs, such as Herceptin or Herclon, made by global major Roche, which cost around Rs 75,000 for a course; a patient could need up to 17 courses. Similarly, a drug called Avastin - used to treat colon, kidney, lung and gall bladder cancer - can add around Rs 8 lakh to a patient's bill at around Rs 1 lakh a cycle. Though companies have patient support programmes, most middle-class patients end up paying 70 to 80 per cent of the drug costs.

With such high costs, cancer treatment is often out of the reach of millions. Take the case of a 16-yearold girl being treated for a brain tumour at Hyderabad's Apollo Hospital. Her parents - a teacher and a government employee - plan to dip into savings set aside for her education and marriage to pay for her treatment, which is expected to cost around Rs 8 lakh. "She wants to be a doctor and we have been saving for that. But what good are the savings if we are not able to save her," says her mother. 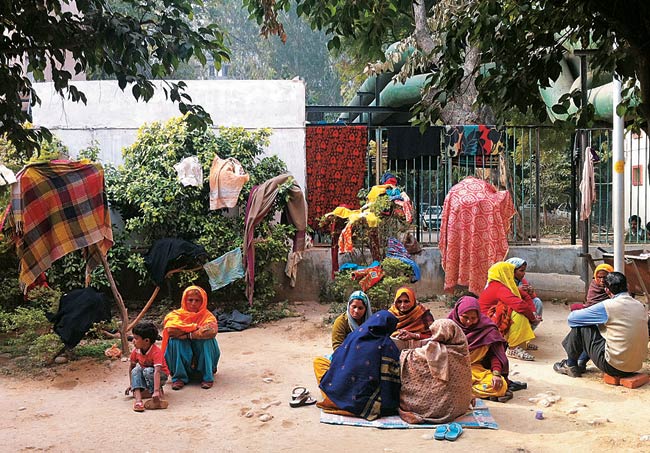 With high costs, cancer treatment is out of the reach of millions Photo: Aditya Kapoor
Doctors are concerned at the growing number of cancer cases in India. Although there is no nationwide data, estimates extrapolated from the Indian Council of Medical Research's cancer registry programme in some areas indicate there are about one million new cancer cases each year. A Planning Commission report estimates that about 2.8 million people have cancer at any point of time and half a million die of the disease each year. The number of cases is expected to go up because of an increase in life expectancy, changing lifestyles and risk factors such as high tobacco use.

Visit any cancer hospital in the country and there are dozens of people from little children to the elderly dealing with the trauma of the disease.

While the incidence of cancer is rising, insurance is a big stumbling block. Only a small fraction of Indians has health insurance and those who do rarely have critical illness cover. Worse, the insurance cover that people choose is often so low that it is meaningless for diseases such as cancer. Of the 40 million individual policies sold in 2011, the average amount per policy was just Rs 1.9 lakh. A higher Rs 10-lakh policy would mean a Rs 17,000 to Rs 50,000 annual premium, depending on the age of the policyholder. "Health cover is very low and is taken by just four to five per cent of the people who can afford it. The average cover that most people take is between Rs 1 lakh and Rs 2 lakh," says Tapan Singhel, Managing Director and CEO, Bajaj Allianz General Insurance Company. Long wait for cancer patients outside AIIMS hospital in New DelhiPhoto: Aditya Kapoor
One way to bring down the crippling costs is through compulsory licensing of cancer drugs, which allows drug companies to make generic versions of patented medicines at cheaper prices. Last year, the Indian Patent Office allowed Hyderabad-based Natco Pharma to manufacture a generic version of Bayer's Nexavar, a drug used to treat certain types of kidney and liver cancers. Natco launched the drug at just Rs 8,880 for a bottle of 120 tablets compared with Rs 2.8 lakh for Nexavar. 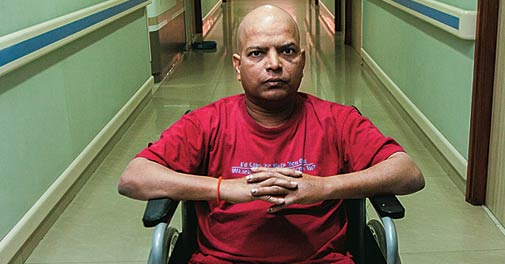 Venkateswara Rao is undergoing treatment for non-Hodgkin's lymphoma. He has already spent Rs 5 lakh on treatment and expects the final bill to be around Rs 10 lakh Photo: A . Prabhakar Rao
But not everybody in the industry agrees with compulsory licensing. Kiran Mazumdar-Shaw, Chairman and Managing Director, Biocon Limited, says the government should look at price controls and bulk procurement of some expensive imported drugs as a way to lower prices. She adds that multinational companies should opt for a dual pricing policy in developing economies. Roche, for instance, tied up with a local firm and lowered the price of Herceptin to Rs 75,000 a course compared with around Rs 1 lakh last year.

Local companies have also helped. In 2007, Dr Reddy's Laboratories Ltd launched Reditux, a drug used to treat non-Hodgkin's lymphoma, at half the price of a similar drug sold by Roche. Y.K. Hamied, Chairman and Managing Director, Cipla, has reduced the prices of about 10 cancer drugs sold by his company.

For example, 120 mg of Docetax - used to treat breast, lung, head, neck and gastric cancer - is down to Rs 7,000 from Rs 14,000. Mazumdar-Shaw says Biocon is conducting phase III trials for its version of Herceptin and hopes to launch an affordable drug next year.

Patients also have a lot more hospitals to choose from today. Fifteen years ago, Tata Memorial was among the few cancer treatment facilities in India. Cancer diagnostic and treatment facilities such as PET scans were limited. Today, the country has about 80 cancer hospitals, and several chains such as Apollo and Fortis have well-known oncology departments.

Cancer hospitals are mostly concentrated in big cities, though some chains, such as Bangalore's Healthcare Global, have set up hospitals in small towns. Several charitable hospitals also help poor people get cancer treatment.

Chennai's Adyar Cancer Institute is one such hospital which treats 12,000 new patients every year. "Only 40 per cent of the patients pay, and the rest either get free treatment or at a highly subsidised amount," says Dr V. Shantha, the institute's chairperson.

Many NGOs help patients and their families deal with the emotional trauma of cancer. Ruby Ahluwalia, a financial adviser to the Railways, who was treated for breast cancer at Tata Memorial in 2009, was so disturbed by the patients she saw that she set up an NGO - Sanjeevini-Life Beyond Cancer - in Mumbai. It focuses on providing emotional and nutritional support to patients. "We were naturally caught by surprise and my own family took a hit. My two children got affected. I had to take long leave to get them back on track. I realised it must have affected others, too, significantly," says Ahluwalia. "I realised that even after their treatment is completed, people start living at a sub-optimal level."
Published on: Jan 29, 2013, 12:00 AM IST
Posted by: Surajit Dasgupta, Jan 29, 2013, 12:00 AM IST