Casual, fine-dining chains on a roll as restaurants become popular

With more Indians patronising restaurants, dining chains have them eating out of their hands. With all the big players gung-ho on expansion, fine and casual dining is expected to touch Rs 10,000 crore by 2015.

There is a growing propensity for out-of-home consumption: K.S. Narayanan
E Kumar Sharma
Seen from the outside, the tall, box-like building at the Marol Industrial Estate in northeast Mumbai hardly conjures up images of culinary delights. But it houses the headquarters of one of the fastest-growing restaurant chains in the country: Pan India Food Solutions, which owns the Spaghetti Kitchen, Bombay Blue and Noodle Bar brands.

"There is a growing propensity for out-of home consumption," says K.S. Narayanan, the company's CEO, explaining the success.

Click here to Enlarge
Neeraj Jain, 50, Vice President at Johnson & Johnson, certainly does. He eats out regularly with his family - wife Simmi and their two sons - and does not believe rising prices will affect eating out at restaurants. "People may talk about eight to 10 per cent inflation, but salaries have also gone up 14 per cent," he says. A favourite haunt is a Spaghetti Kitchen outlet in Mumbai.

It was not always this way. Pan India Food Solutions (also known as Blue Foods) had to struggle at the start. Incorporated in 2000 by Sunil Kapur and three others, it initially tied up with the Future Group and plunged into the emerging food court business. But the results were indifferent: as late as 2008, it was a loss-making company.

That year, however, saw private equity firm Everstone Capital Advisors invest in the company, as well as a shift of emphasis by the company itself: though the food courts remain, it concentrated much more on building its fine dining and casual dining business.

"We opened the first Spaghetti Kitchen outlet in 2004," says Narayanan. "Till 2008 we had added only one more. But since then we have grown with the market and today have 13 outlets across five cities." 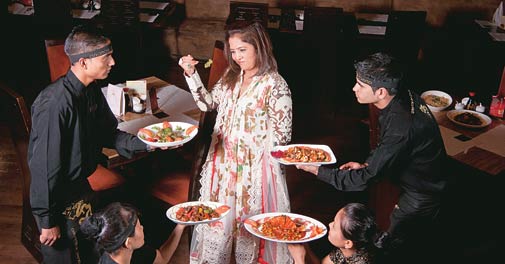 We've started a management contract model where we undertake the complete management of a facility: Nisha P. Nichani
Everstone Capital, through its investing platform Cuisine Asia, now owns 80 per cent of the company, with an investment of Rs 200 crore. "What got us interested was that this was a highly consumer-centric business with established brands that take years to build," says Jaspal Singh Sabharwal, Partner, Everstone. "It is now moving into the profitable zone and we intend to stay invested."

If Spaghetti Kitchen rode the wave of a growing Indian love for Italian fare, Speciality Restaurants capitalised on the increasing demand for regional cuisines as well as 'authentic' Chinese food - as opposed to the Indianised version available at every street corner.

It began as a single eatery called 'Only Fish' in Mumbai in 1992, one of the earliest to serve Bengali cuisine outside Kolkata, following that up with the first 'Mainland China' outlet, again in Mumbai, in 1994. Since then it has grown to 60 fine dining restaurants across the country, including the brands 'Mainland China', 'Oh! Calcutta' - as 'Only Fish' was renamed in 1996 - and others. In May this year, it became the first company in the fine and casual dining sector to go in for an initial public offering, which was oversubscribed two and a half times. It listed above the issue price of Rs 150 and currently trades at around Rs 180. 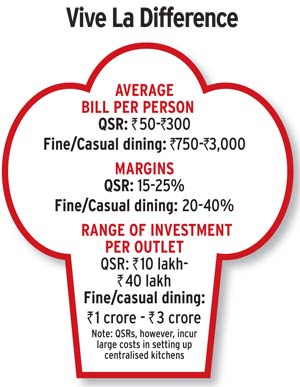 These are only two of numerous instances which show that the fine and casual dining sector - currently estimated to be around Rs 3,000 crore - has customers eating out of its hands. Lite Bite Foods, for example, a personal venture of the Dabur Group vice-chairman's Amit Burman, runs 25 fine dining restaurants, and most of them are prospering.

The Ohri chain, owned by the father-son duo of Ravi and Amar Ohri, has 26 similar thriving outlets across Hyderabad and Bangalore. Customer cannot seem to get enough.

"Some 18 months ago we opened a new outlet of Mainland China at Powai in northeast Mumbai, but that did not impact our existing outlet at Saki Naka, barely three km away," says Anjan Chatterjee, owner of Speciality Restaurants. "There was no cannibalisation, despite their proximity."

Restaurants come in two broad formats - the fine or casual dining chains, and the quick service ones. The fine and casual dining formats are essentially the same, varying only in prices charged: thus restaurants such as those which are part of the Taj Hotels would be classified as 'fine dining' ones, while the likes of Mainland China and Spaghetti Kitchen fall in the casual dining category.

The economics of the quick service restaurants (QSRS) are very different. The success of the latter - such as McDonald's, Domino's or Pizza Hut - is apparent; indeed, Jubilant FoodWorks, which holds the franchise for Domino's, also listed successfully on the stock market in 2010. QSRS have a central kitchen and standardised fare, operate on lower margins but make up on scale, since the cost of setting up outlets is comparatively low.

Fine and casual dining restaurants are the ones which have elaborate menus and take pains over garnishing and quality of service, usually serving liquor as well. They are much more capital intensive, with each new restaurant costing between Rs 1 crore and Rs 3 crore.

Most leading names are in the casual dining sector. They also have one foot in quick service. Pan India Food Solutions has its food courts and another chain selling frozen desserts. Speciality Restaurants also runs confectioneries, mostly selling Bengali sweets, Lite Bite Foods has several quick service outlets, including the franchise for Subway. "Typically operating profit margin in the fine dining space range between 25 and 40 per cent, while in the quick service category it is between 15 and 25 per cent," says Lite Bite Foods's Burman.

With all the big players gung-ho on expansion, fine and casual dining is expected to touch Rs 10,000 crore by 2015.

"We expect to grow at a consistent pace of 20 to 30 per cent per annum over the next five years," says Pan India's Narayanan. Speciality Restaurants's Chatterjee has 45 new restaurants planned by 2014/15. Burman sees himself investing Rs 70 crore to Rs 100 crore in the next five years.

Equally upbeat are the Ohris. "We may soon get to five or six cities," says Amar Ohri. "Private equity funds are talking to us."

With the example of Everstone Capital before them, many other PE investors are also eyeing this sector. New Silk Route Growth Capital has set aside $100 million to invest in food and beverage companies, including fine dining restaurants. However, not all those looking for PE investment so far have been successful.

The BJN Group, for instance, which runs 29 restaurants, and has faced tough times since its founder Prakash Nichani died in 2009, has been looking hard for such investment but has not found it. It is in talks with high networth individuals for funding.

"We are doing more compact models now," says Nisha P. Nichani, Chairperson of the group. "We have started a management contract model where a franchiseowner invests and we undertake the complete management of the facility."