Zee’s advertising revenues are falling sharply, but its top brass is counting on a huge burst in subscription revenues in the medium term.

Subhash Chandra is known to think ahead of the times. He started Essel Packaging in the early ’80s to make laminated tubes when aluminium tubes were being used (mainly by toothpaste makers). Today, aluminium tubes are virtually extinct, replaced by soft-squeeze lamitubes. Similarly, a decade later, Chandra pioneered satellite television in India by launching Zee TV.

And in 2002, Chandra once again displayed his penchant for moving first when he flagged off Dish TV, India’s first direct-to-home (DTH) service. That it is neck-deep in red is another matter, but Chandra isn’t perturbed. “Broadcasters are busy solving today’s issues,” quips the Chairman of the Essel Group, which includes Zee Entertainment Enterprises and its 17 channels, Zee TV being the flagship.

One of today’s burning issues is, of course, the slump in advertising, the backbone of television broadcasting, which makes up on an average 39 per cent of broadcasters’ revenues. Chandra, true to type, prefers to look ahead. The silver lining he sees is that of the 120 million television homes, some 10 per cent had DTH connections as of March 2009.

“The entertainment industry is witnessing a huge transformation led by technological advancements, new delivery platforms and growing diversity of content,” reckons Chandra. Adds Chandra’s son Punit Goenka, who is CEO of Zee Entertainment: “Our choice to strengthen subscriptionbased service has proved correct and timely, and DTH revenue streams have performed better. My expectation is that the revenue mix would go up to 70:30 in favour of subscription revenues in the next three years.” 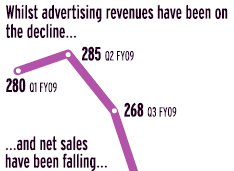 Encouragingly, for Zee Entertainment, subscription revenues—via various DTH operators—increased by 93 per cent over the previous year, with international subscription contributing a little over a fifth to revenues. Yet, if the company’s top-line and operating profits are either flat or falling, that’s largely because of the sharp decline in ad revenues—from Rs 280 crore in the first quarter of 2008-09 to just under Rs 200 crore in the first quarter of the current year.

In comparison to the previous quarter—the fourth of the previous year—ad revenues, which constitute roughly 41 per cent of total revenues for Zee, are down 30 per cent. The general entertainment channels as a whole are seeing a degrowth of 8-10 per cent in ad sales in the last 3-4 months.

Along with declining ad sales, what’s hurting Zee is escalating costs—the cost of coping with competition. Operating costs last year were up 26 per cent, and this was thanks largely to a 68 per cent surge in selling and distribution costs and a 41 per cent spurt in personnel costs. In this year’s first quarter, Zee Entertainment did manage to bring down its employee and selling & admin costs, but production and transmission costs were up, and were, in fact, 121 per cent of advertising revenues. This was thanks largely to the launch of new shows like Aapki Antara and Pavitra Rishta in the April-June period.

The good news for Zee is that those costs are translating into more eyeballs. After being consigned to a distant #3 eight months ago (it had a GRP or Gross Rating Point of 195 and commanded a channel share of just 17 per cent), Zee TV is firmly back in the reckoning in the Hindi broadcasting space—the one that matters. Between January and July, Chandra’s flagship channel has garnered an average share of 20 per cent, close on the heels of Colors (22 per cent) and STAR Plus (23 per cent). In the current year’s first quarter, its GRP stood at 234, not far behind STAR Plus’ 255 and Colors’ 258. Significantly, Zee has emerged joint leader on prime time along with Colors in the May-June period. Zee TV also has 18 shows in the Top 50.

That comeback has plenty to do with a programming revamp that took place at the start of the year. To give viewers more, Zee widened its prime band, which now starts at 7 p.m. and ends at 11 p.m. (as against the conventional 8-10 p.m.).

Adds Ajay Bhalwankar, Programming Head, Zee TV: “Zee’s programming has always rested on originality. Programmes such as Aapki Antara, Agle Janam Mohe... and a forthcoming serial 12/24 Chaubis… Karol Baug are original concepts that have emanated out of our ideation cell that was set up few months ago.”

It’s such a strategy of self-production of some content, along with linking payouts to content providers to ratings, that could help Zee bring down its costs. Currently content costs account for some 60 per cent of total expenses. The company is pulling out all stops to reduce costs on other fronts. The closure of Zee Next has helped bring down carriage costs. “Similarly, a number of hours of programming (in the afternoon band) have been reduced on Zee TV, which has helped us bring down our marketing costs,” says Atul Das, Executive Vice President (Corporate Strategy & Business Development), Zee Entertainment. Celebritydriven content is also a no-no for Zee, thereby guarding itself against the risk of major programming disasters.

Analysts feel that such rigid costing initiatives will manifest in restricted revenue growth. “There is scepticism about the company’s ability to hold costs at these levels, without having a negative impact on top-line growth, during the next 12 months,” says Shubham Majumder, Head (India Telecom, Media & IT Services Research), Macquarie Capital Securities.

Zee’s biggest concern, though, is falling ad revenues. And, as Majumder points out, although cricket tournaments like the Indian Premier League and the T20 World Cup would have sucked away advertising in the recent past, “the impact of increased competition and a soft macro outlook are here to stay and should weigh on the company’s future growth.” What’s more, there’s more cricket round the corner, in the guise of the Champions League and Champions Trophy. “Also, poor monsoons will result in FMCG companies, who are big advertisers on TV, taking a relook at their ad budgets,” adds Siddhant Khandekar, Research Analyst, Sunidhi Securities & Finance. A recent PricewaterhouseCoopers report on the Indian M&E sector estimates that there will be a marked slowdown in advertising spending—to 9.2 per cent in 2009 from 11.3 per cent in 2008. Chandra’s gambit of focussing on moolah from subscription will have to pay back sooner than later.

KINDNESS TO THE KINFOLK
Zee Entertainment has been liberally lending to group companies.

Subhash Chandra has big hopes on his son Punit Goenka, CEO, Zee Entertainment. “Punit has created a good leadership team… The expectations from him are disproportionately high because of his family background.” Punit can rely on his father, who has stepped back from day-to-day operations, for advice and a helping hand.

In fact, such family allegiances go beyond the promoters and extend to the companies themselves, many of which are leaning heavily on the flagship for succour in the form of debt. Consider: As of last year, outstanding loans and advances to group companies—Dish TV, Wire and Wireless (India) or WWIL and sundry promoter group companies—stood at Rs 1,048 crore, almost double the figure for 2007-08. Dish TV and WWIL are the main beneficiaries and both these distribution companies—Dish TV via DTH and WWIL via cable—are in the red to the tune of Rs 240 crore and Rs 130 crore, respectively. Group company Zee News, too, has been lending to these two companies.

Analysts aren’t too happy with such incestuous lending, what with the balance sheets of two relatively-sound companies being exposed to keep two ailing companies going. Atul Das, Executive VP (Corporate Strategy & Business Development), Zee Entertainment, points out that these loans and advances were given to the respective companies when they were then all part of one entity. Zee expects these companies to become profitable in 12-18 months and start repaying. Shareholders will be watching.