Welcome to the world of big data, which is helping governments, global corporations and municipal bodies address resource challenges and drive the use of clean technologies.

Apart from millions of pilgrims, the ongoing Kumbh Mela at Nashik has attracted some unusual visitors - an army of techies and data scientists. In fact, long before the mega fair began on the banks of the Godavari, a team of researchers from Massachusetts Institute of Technology (MIT) travelled down to Nashik to organise a Kumbhathon, an open sandbox initiative - or a testing environment - to see how technology could be used to help manage issues thrown up by large congregations.

Among other experiments, the Kumbhathon saw a group of researchers installing sensors that would "smell the air, taste moisture, and feel the sting of pollution", as digital nomad and futurist Ulrike Reinhard colourfully describes in her blog. As millions of people descended on the city, the sensors got to work, picking up data - real time - on temperature, humidity, dust particles, noise, oxygen and carbon dioxide levels, etc. The information will be disseminated on the web using an open data platform. This allows anyone to visualise - using a map view - the environmental changes happening in the city during the mega fair.

Data scientist and cofounder of Juxt Smart Mandate, Mrutyunjay Mishra, who is involved in this project, says open data can have a big impact in interventions in environmental protection. For instance, just out of Nashik, by October, they hope to have enough data to show how a city's environment changes when population bursts happen. "In Nashik, during the Kumbh, the city's population will shoot up 20X times, going from 1.5 million to 30 million. What happens to the environment during this time? We will have some baseline data now," he says. While Nashik is a test case, going forward Mishra says all kinds of crowdsourced data that can be read by anyone on a mobile app would become available. For instance, the impact of radiation in areas hosting nuclear activities can be measured and shared.

Already, under the government's Open Government Data (OGD) platform, reams of data on air quality and water quality are helping civic agencies and corporations draw up action plans. But while the government uses expensive measuring devices, Mishra says the world is moving to capture data in a cheaper, scalable and simpler way. "Our devices are cheaper, the designs are interesting, and participation is by the people," he says.

Welcome to the world of big data, which is helping governments, global corporations and municipal bodies address resource challenges and drive the use of clean technologies. Companies like United Technologies, ABB, Honeywell and GE are all riding the wave of big data to make buildings, refineries, plants, aircraft and utilities smarter and greener.

Take, for instance, the way Honeywell's software Akuacom helps energy providers improve grid reliability through automated load management. It also provides for two-way communication between a utility and homes or factories, allowing the utilities to send messages directly to cut energy use when needed. In a pilot, Tata Power Delhi Distribution Limited (TPDDL) has implemented the technology to link over 160 buildings in its distribution network, helping it manage power during periods of peak consumption.

Or take the way United Technologies Corporation (UTC) allows buildings to use big data flowing from its air-conditioning, security and elevator systems to help manage energy flow. "When you get into a building where the cameras, elevator systems and access cards are all throwing information, you can pool the data together," describes Gaurang Pandya, President, UTC Building and Industrial Systems (India), adding that the more information the building generates, the more efficiently it can be run. Big data is helping governments, global firms, and municipal bodies address resource challenges and drive the use of cleantech.
All kinds of data sets are today converging and influencing the way buildings and facilities are managed. For instance, behavioural data gleaned from energy usage of individuals helps utilities. As the Internet of Things (IoT) becomes more prevalent and more and more devices get connected and talk to each other, expect a host of energy savings to accrue. Already in the western world, millions of smart thermostats have been installed in homes and facilities by companies like Opower, from where data flows into databases and are used to drive energy efficiencies.

According to Anant Maheshwari, President, Honeywell India, we are seeing clean technology applications of big data in refineries, high investment capex industries, power utilities, aerospace, and even in hospitals, hotels and companies with large footprints. "In refineries, we are seeing data getting transferred to central warehouses where experts monitor and make interventions," he says. "The central theme in the use of big data is the maintenance - how you reduce downtime and increase efficiency."

The next frontier for big data is in the mobile and wearable space, says Maheshwari. "If you are working on a construction or industrial site, it is important for workers to be safe," he says. "We are now seeing gloves, jackets and hats that are smart and have a sensing ability to communicate. There is definite application of wearable technology."

Such wearable technology in India is just about getting discussed. Globally, it is becoming quite significant, he says. It is also a pricing issue now. As costs come down, these technologies will be seen more and more around us. 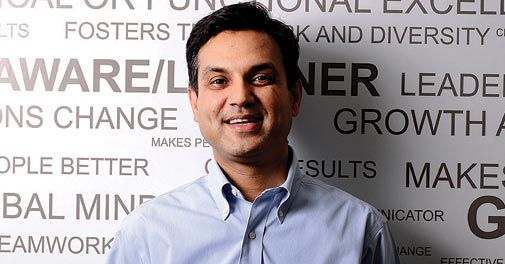 "There are enough examples in India of companies using big data"

Q- How are you using big data and clean technology?

A- We have worked on a cutting-edge big data platform for one of the refiners in India, where with the help of data, we made the refining operation a lot easier to operate. And we are now bringing it to mobile devices for the ability to operate even a complex operation like a refinery. It helps the refinery become more efficient and easier to manage. Today, if you look at refining operations in India, a lot of operators have been there for many years. But as they create operations of the future, they need to transition the refining experience into codified areas so as to take better decisions on how to run it. That's where big data comes in. Other simpler areas are examples like air purifiers in homes. Recently, we launched air purifiers in China, where you can see the general quality of the air in the city, with the help of data picked up from public sources, social media, and then measure it against the air purifier at your home. This tells you the change the gadget is making.

Q- What about in offices?

A- We have worked with hotels, airports and hospitals in India, where they are leveraging these control rooms after having set up smart buildings that monitor how green they are, how productive and safe they are. There are enough examples within India of companies using big data.

Q- What about utilities?

A- In India, smart grids is still a new phenomenon. There is a very structural reason for that. In developed markets, utilities are end to end. They generate, transmit and distribute to the end-user. So they can monitor the usage and figure out if they need to increase generation. In India, it is all segmented. The generator is different, the transmission is different, and the distributor is different. So an end-to-end ecosystem does not exist. It's difficult for the information to flow. There are smart grid pilots happening in India. But they are still in trial stage and there are structural challenges. We acquired a technology a few years ago called Akuacom, which through thermostats at homes or companies helps utilities track usage in that facility and transmit it back, so that utilities can continuously advise on increasing or reducing the energy supply and manage costs better.