In the event of a deallocation, the mines are likely to be handed over to CIL. The state-owned producer is by no means the epitome of efficiency when it comes to production and supply. Many power projects are likely to get delayed without assured supply of coal.

Anilesh S Mahajan/K.R. Balasubramanyam/N. Madhavan
Amidst all the sound and fury over the allocation of coal blocks, two questions have not been answered. First, how much of an impact will any "de-allocation" have on the country's economy? Second, with state-owned miner Coal India Limited (CIL) expected to take over any de-allocated mines, will there be any long-term impact?

Judging by the numbers, there is unlikely to be any kind of immediate impact on the economy. Of the contentious 142 blocks that have been allocated since 2004, only one has commenced production. Among the five companies that have been chargesheeted by the Central Bureau of Investigation, not even one is producing coal. In sum, "coalgate" will not affect the demand-supply situation on the ground today.

Speaking to BT, Coal Minister Sriprakash Jaiswal implied that there would be no blanket de-allocation . "We cannot cancel the allocation at the drop of a hat. We will take a decision (on whether to cancel these blocks) by the second half of September," he said.

An Inter-Ministerial Group , consisting of key officials from the ministries of coal, steel and power, as well as state governments, is reviewing the allocation of 58 blocks. Allottees have been served notices for not meeting development milestones.

The group will review 32 more blocks in the next lot. While any de-allocation may not have an immediate effect, there certainly will be an impact in the future. Many power projects, which are dependent on captive coal blocks from the allocation, are likely to get delayed without assured supply of coal. If supply of electricity is affected, there will be a cascading effect across the economy.

For instance, financial services firm Nomura says about 28 per cent of BHEL'S order book is at risk of cancellation or deferment either due to non-availability of coal linkages or the threat of cancellation of existing linkages.

"Unless we have a clear coal policy, India's growth will be stunted. Lack of coal will come to haunt us," says A.V. Dharmakrishnan, CEO, Madras Cements Ltd.

"Inadequate coal will directly hurt India's capacity to develop power plants and generate electricity." A power project has four major components - land, fuel linkage, finance and statutory clearances. A project without a fuel linkage is as good as dead. If the government were to cancel coal block allocations, it would halt projects under development/construction, and turn thousands of crores of bank loans into non-performing assets. And, of course, spark endless litigation. 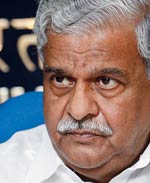 Coal Minister Sriprakash Jaiswal
Godrej Group Chairman Adi Godrej, who also heads corporate lobby CII, says coal blocks allocated through a legal process should not be cancelled as any such cancellation would adversely affect business sentiment. "There are several issues which lead to delays in the start of production in coal blocks. These are related to forest and environment clearances, land acquisition, law and order, security issues and lack of supporting infrastructure. These would need to be addressed through a time-bound, single-window mechanism," he said in a release.

Ashok Khurana, Director General of the Association of Power Producers, says "there could be a problem, if these blocks are linked to some utility, which is to come up in the 12th plan". Most of the blocks had to start production during the 12th Plan, going by commitments made by the companies.

Generation companies, such as Tata Power, Adani Power, Reliance Power and JSW Power will be forced to import coal. Import of thermal coal is projected to go up to 80 to 85 million tonnes in 2012/13 from 54 million tonnes last year.

But the situation may not be as bleak as it seems. In the event of a deallocation, the mines are likely to be handed over to CIL. The state-owned producer is by no means the epitome of efficiency when it comes to production and supply. But even with its imperfections, there is certain to be some level of supply. The Finance Ministry is also drawing up a blueprint to allow CIL to outsource production to private contractors.

CIL accounts for 80 per cent of India's domestic coal production. In 2011/12, it produced 436 million tonnes against the target of 447 million tonnes. This year, it may not even match last year's production.

"Till 2006/07, CIL's production was enough for the power producers. But in the 11th Plan, nearly 55,000 MW of new generation capacity was added. The majority of that was coal fired. It intensified the need for more coal," says Khurana.

Power demand is surging at over 20 per cent per annum and coal remains the main feedstock to generate electricity. Nearly 80 per cent of CIL's production goes to the power sector, which has an installed coal-fired generation capacity of 117,283 MW as of July 31, 2012.

Judging by the latest Central Electricity Authority data, CIL's inefficiency has meant that at any time, more than 25 coal-fired power plants do not have fuel for more than a week. Since, availability of gas is limited, coal would have to remain the major source for now.

There are also apprehensions that the shortage of coal and indiscipline in the grid will lead to more grid failures in the future . The collapse of the northern, eastern and northeastern grids at the end of July left half the country without power, affecting 600 million people across 22 states.

The cement sector, key to any future infrastructural growth, will also be affected adversely. The industry, which produces 358 million tonnes of cement annually, requires 50 million tonnes of feedstock every year. However, in 2011, it received only 10.63 million tonnes - 23 per cent of its actual requirement - from CIL and its affiliates.

Poor supply by CIL is forcing the industry to turn to imports. Madras Cements, for instance imports 80 per cent of its coal needs. "Imports can help but poor port infrastructure will make things difficult," says Dharmakrishnan. "Even landlocked plants (those not located near ports) have shifted to foreign coal as domestic supply has declined."

Transporting coal over long distances adds to production costs but many manufacturers have little choice. Dependence on imports also involves other challenges, such as currency fluctuations and policy changes in exporting countries. For instance, in 2011, Indonesia changed its coal pricing mechanism and linked it to international prices.

This is affecting companies such as the Tata Power, Reliance Power Ltd and GMR Energy Ltd, which have acquired mines in the country. It may step into the breach, but CIL will have to undergo a metamorphosis to deliver the goods to fire up the economy .