News
Magazine
Features
Companies that are making wealth from waste

Companies that are making wealth from waste

More and more companies are making wealth from waste and, in the process, saving the environment from devastation. Business Today looks at these green businesses.

Rupinder Singh Arora, Chairman, Arora Fibres, sitting at his office in Silvassa <em>Photo: Rachit Goswami/www.indiatodayimages.com</em>
Mahesh Nayak
More and more companies are making wealth from waste and, in the process, saving the environment from devastation. Business Today looks at five of these green businesses.

Don't chuck out those plastic bottles that have been piling up in your kitchen for days. They can be re-used to make polyester fabric. Rupinder Singh Arora, Chairman of Arora Fibres Ltd, has been recycling discarded plastic bottles into polyester staple fibre since 1994 after he saw the colossal damage to the environment from mountains of bio-degradable plastic being burned in the country. "We were the pioneers in this field.

Apart from a commercial interest , converting PET Into polyester has a huge positive impact on the environment," says Arora. PET stands for polyethylene terephthalate.

Arora brought the technology to India after tying up with Korean company Mijung, which specialised in converting PET bottles into polyester yarn. His factory in the industrial belt of Silvassa in Dadra & Nagar Haveli has the capacity to process 18,000 tonnes of plastic a year and he plans to increase that to 48,000 tonnes by next year. Arora says the environmental benefit of recycling discarded plastic bottles is enormous. "By recycling 10 billion PET bottles, one can save one million square yards of landfill space and eliminate 0.25 million tonnes of carbon dioxide released into the atmosphere. Rupinder Singh Arora, Chairman, Arora Fibres, sitting at his office in Silvassa. 'Plastic has been profitable for Arora Fibres: the company hopes to touch Rs 75 crore in revenues this year' Photo: Rachit Goswami/www.indiatodayimages.com
And recycling one kg of PET saves around 25,000 BTUs (British Thermal Units)," he says. Plastic has clearly been profitable for Arora Fibres. It tapped the primary market in 1994 to raise Rs 9.6 crore to set up the Silvassa plant and logged Rs 34 crore in revenues in the financial year that ended March 2013. It hopes to touch Rs 75 crore this year. The polyester fibre has a huge market in many industries such as automobiles and is also used as packaging material for beverages, food products, pharmaceuticals, and consumer and industrial products.

But the business has had its ups and downs. Although there are about 20 players who convert nearly 300,000 tonnes of PET bottles into polyester fibre each year, the industry depends on rag pickers for raw material. Arora says the industry was also hit by an increase in raw material prices and a fall in finished product prices. "The shortage of raw material and the power problems until 2010 in Silvassa have been the reasons why others overtook us in the business," he says.

"Despite competition and profitability getting squeezed, net margins remain healthy at 10 per cent." 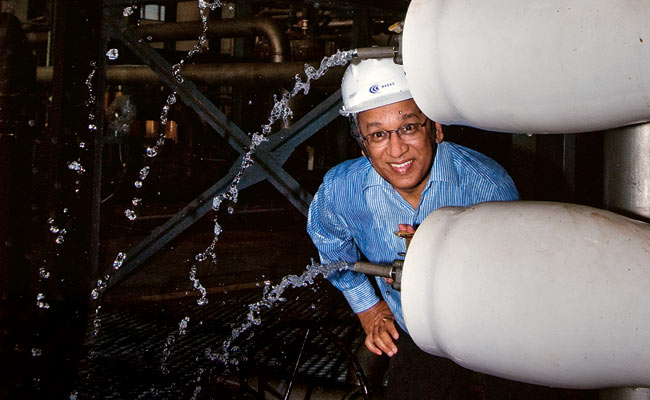 It is sometimes said that water, and not oil, is the real liquid gold today. Water technology company VA Tech Wabag would certainly agree. The Chennai-based company recycles industrial and municipal waste water either for reuse as drinking water or to plough back for industrial use.

And money has been flowing like water. Executive Director Amit Sengupta says 10 to 15 per cent of the company's revenues come from recycling, but he expects it to account for 50 per cent of Wabag's business in the next 10 years. Last year, the company recorded revenues of Rs 1,000 crore in India.

Wabag has helped many companies clean up their act. Six years ago, it stepped in to help Indian Oil Corp's Panipat refinery when a farmers's lobby in Haryana raised a hue and cry over the company's waste water discharge. The water treatment company recycled the entire plant's waste water discharge and made it as pure as drinking water. It will build an effluent treatment plant with recycling facilities for Reliance Industries' purified terephthalic acid plant in Dahej and a tertiary treatment plant for the Reliance petrochemicals complex in Hazira.

Sengupta says though a scare resource, water is cheap in India and people will not reuse it until the government comes out with strict rules or water becomes more expensive. So, how much of the waste water is reusable? "The short answer is 'All of it'," says Sengupta. "But it depends on the quality for reuse as per customer requirements." 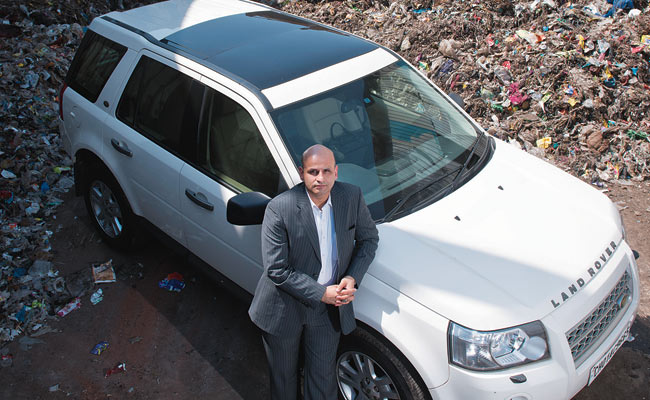 Ever wondered what happens to all that garbage at landfills dotting your city? You'd be surprised. Some of it can actually be recycled to generate power . Waste management company Hanjer Biotech Energies realised that when it kickstarted India's first green power plant in Jalgaon in Maharashtra this year by using a byproduct of solid waste as fuel. The biomass power plant had been closed because of the unavailability of husk rice, the raw material for fuelling the plant, which pushed Hanjer to turn to refuse derived fuel (RDF) from municipal solid waste to generate seven megawatts (MW) of green power.

The concept of converting waste to energy is not new, but Mumbai-based Hanjer plans to take it to a new level following the success of its experiment in Jalgaon. It plans to take over four to five closed biomass power plants in Maharashtra, Madhya Pradesh and Rajasthan to generate around 40 MW of green power and then set up a green power plant in Surat, Gujarat that runs completely on fuel from solid waste.

Usually, 20 to 30 per cent of supporting fuel such as coal or oil is used along with RDF to generate power.

The plant in Surat will use green fuel derived from waste from three of the company's solid waste processing facilities in the state to generate 15 MW of power. The plant has the potential to reduce green house gas emissions and will earn carbon credits for Hanjer. "Of the total 9,100 tonnes of waste which we process, around 18 to 20 per cent is green RDF. With the amount of green RDF produced after recycling the waste, we can run six 15 MW power plants," says Irfan Furniturewala, Founder and Chairman of Hanjer.

How does the system work? Simple, green RDF is generated from dry municipal solid waste that is dried, crushed, screened and packed into brick form. The clean and nonpolluting fuel is used as a substitute for conventional fossil fuels such as coal which is in short supply. Hanjer posted revenues of Rs 410 crore in 2012/13 in an industry growing at 20 per cent a year. 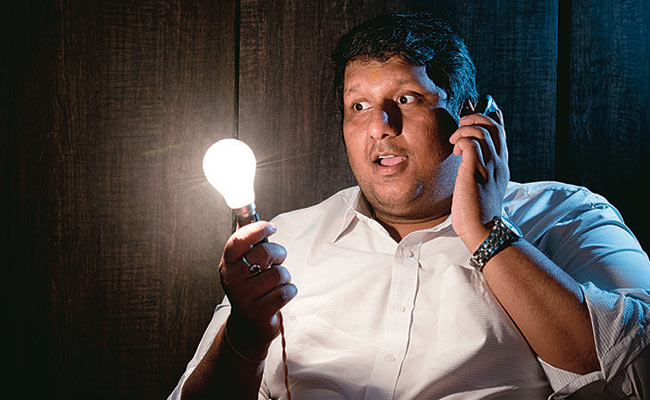 Next time you drive along the Mumbai-Pune express highway and don't experience any dropped calls on your cellphone, you should thank Mahesh Choudhary. He is the CEO of Microqual Techno, a telecom infrastructure services company that has tied up with Mumbai-based outdoor advertising company Guju Ads to use its 1,000 billboards and hoardings across 13 cities as telecom towers sites. "This will help telecom companies bring down operational costs by 40 per cent and capex by 30 per cent," says Choudhary, who sees huge potential from the new initiative as 35 per cent of India still does not have mobile coverage and more than 50 per cent does not have a continuous mobile network.

Only 50 towers have been put to use so far. The journey to turn idle or waste resources into wealth started three years ago in Kerala when mobile services company Aircel wanted to set up telecom towers but found it difficult to operate within the cost it had estimated.

Microequal used a combination of solar and wind power to operate the telecom tower site and cut fuel expenses by 40 per cent. The innovation is paying off: the company posted Rs 600 crore in revenues last year. "In the next three to four years, the innovative vertical will account for 25 per cent of our business," says Choudhary. 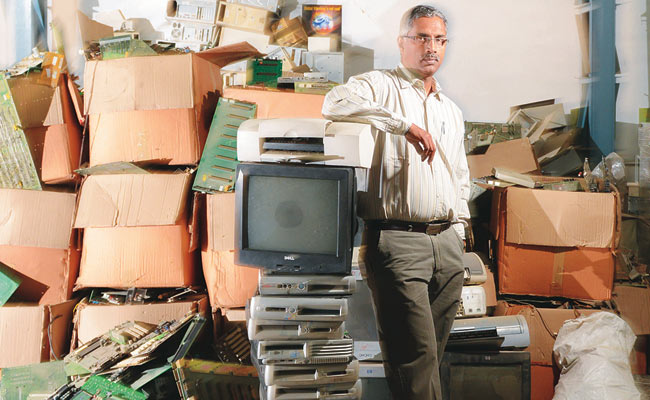 Gururaja Upadhya, Co-founder, Cerebra Integrated Technologies, at an e-waste segregation plant near Bangalore. 'The company is building India's largest e-waste recycling plant with the capacity to process 90,000 tonnes of e-waste' Photo: Nilotpal Baruah
CLEANING E-WASTELAND
Cerebra will extract precious and other metals from mountains of e-waste

Twenty years ago, tossing out an old toaster or much-used iron was unthinkable in India. Today, people don't think twice before changing computers and mobile phones almost every year. So, what happens to all the old gadgets and gizmos? They end up as e-waste.

One Bangalore-based infotech company, Cerebra Integrated Technologies, is doing its bit to reduce the glut of e-waste that some activists say is potentially the most dangerous waste problem in the world. It is building India's largest e-waste recycling plant that will begin operations by the end of this year. The plant will have the capacity to process close to 90,000 tonnes of e-waste. "We wanted to find a solution to dispose of the e-waste left after the repair and refurbishing process was completed, and realised there were only one or two medium-sized players in this business," says Gururaja Upadhya, Co-founder and Director-Technical at Cerebra Integrated Technologies.

But e-waste is also a treasure trove of precious and other metals. Cerebra sees big business in the mountains of e-waste in Bangalore which produces 200,000 tonnes of e-waste a year. The company plans to make its millions by extracting metals such as gold and platinum from the e-waste piling up in the city. A mobile phone, for example, is made up of a combination of rare earth and precious metals: it contains 250 mg of silver, 24 mg of gold and nine mg of palladium while a laptop has 1,000 mg of silver, 220 mg of gold and 500 grams of copper.

Cerebra hopes to wrap up its Rs 110-crore acquisition of Singaporebased Cimelia Resource Recovery this year, as part of its plans to make its mark in the global e-waste business. "The recycling business will bring in the maximum revenues for the group. In the next three to five years, we expect the business to be in excess of Rs 500 crore," says Upadhya. "More than 50 per cent of the company's revenue and profit would come out of our e-waste business."