Mumbai-based Complykaro is helping companies comply with laws related to sexual harassment at the workplace.

The tongue-in-cheek and seemingly innocuous comment by eminent lawyer Harish Salve in the Supreme Court in 2014 raised the hackles of opposing counsel Indira Jaisingh. "The interjections by the learned senior counsel ... are always delightful," Salve had said, referring to Jaisingh, a noted jurist.

Jaisingh took umbrage at the use of the word "delightful". She wondered whether Salve would use a similar expression for men and described it as a "sexually coloured" comment. "She may well be right ... the evaluation of a charge of sexual harassment would depend on the manner in which it is perceived," the judge observed later.

Vishal Kedia, founder of compliance advisory company Complykaro, cites several such examples to highlight the subjectivity in interpretation of sexual harassment. There is an urgent need to spread awareness about the issue, particularly at the workplace, he says. And Complykaro does precisely that - helps companies comply with the requirements of the Sexual Harassment Act 2013. "I believe going forward, enforcement will only get stronger and the chalta hai attitude of India's social environment will become a challenge in the new compliance regime," he says. It is a business opportunity Kedia, 42, wants to tap.

Kedia, a finance graduate, decided to launch Complykaro in 2014 and scouted for more partners. He found an ally in his lawyer friend Prem Rajani, Managing Partner and founder of Mumbai-based law firm Rajani Associates. Rajani got Sangeeta Lakhi on board, a Senior Partner in his firm, and both of them took on the role of the subject matter experts for the company. Kedia also brought in his 46-year-old brother-in-law Ashish Singhania who runs a stock broking and investment firm in Mumbai. The four of them then started Complykaro in September 2014.

The roles were clear. Rajani and Lakhi would be at the back end providing legal expertise. Singhania would manage the operations and Kedia would focus on client acquisition and business development.

Initially, the four shortlisted two new Acts that would affect companies - Whistleblower Protection Act 2014 and the Sexual Harassment Act 2013. "During the research, as we talked to companies we found they didn't need any elaborate compliances for getting around the Whistleblower law. They could just assign the duty to an in-house officer and be done with that," says Rajani. But what needed a lot of attention from employers was the Sexual Harassment Act, he points out. It was the trigger for the Complykaro team to zero in on the sexual harassment law, according to Kedia.

In fact, in December 2014, Kedia and his partners conducted a survey on whether companies understood the provisions of the Act. They met 500 companies, with offices at Nariman Point and Lower Parel in Mumbai, the bastions of corporate India. What they found was startling - 97 per cent of the companies were not aware of the law. 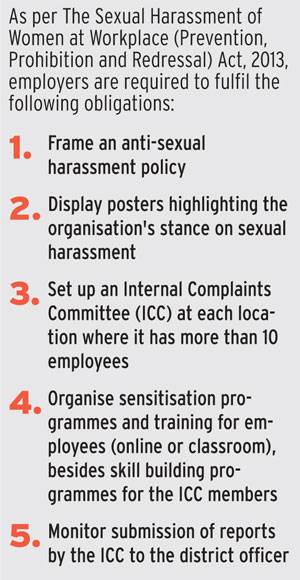 Complykaro helps companies with end-to-end solutions for complying with the provisions of the Sexual Harassment law - from framing an internal policy to conducting training and awareness programmes for employees. And this differentiates them from competition, according to Kedia. "Our competition is mostly companies giving legal advice or there are diversity consultants doing sensitisation of employees. We wanted to be a company that does both." It also provides customised solutions for companies as per their requirement. "A compliance advisor providing mentoring, training and end-to-end services is a boon and also prevents the promoter/founder from the complexities around dealing with multiple service providers and commit defaults due to the inability to monitor the checks and measures," says Archana Khosla, founder partner of law firm Vertices Partners.

Complykaro provides training through workshops, using videos, case studies and everyday examples, in groups of 30-45 employees. The company charges between `15,000 and `25,000 for a three to four hour session. It is Kedia who travels 12-15 days a month for such sessions. But, since classroom training can be cumbersome, Complykaro also provides online training modules in English and Hindi. This 45-minute interactive training module is provided to companies at a fixed cost per user. The amount varies according to the number of employees. For companies with less than 200 employees, it is `250 per user which reduces to `100 for more than 500 employees.

It wasn't easy initially for Complykaro's team to get clients even though the market for their services appears huge. Most companies approached by Kedia and his team felt that the law is unfair to male employees and, if they spread awareness, women will misuse it. So, they targeted professional associations. They reached out to Institute of Company Secretaries of India, Institute of Chartered Accountants of India, the Press Club of Mumbai, Public Relations Council of India and ASSOCHAM and other professional bodies. It helped them get new clients without any promotional activity.

The founders are clear that they dont want to raise venture funds to scale up quickly. "We want to get the business model right rather than distract ourselves with investors," says Singhania. The four co-founders have jointly put in Rs 1.5 crore to start the company. "We wanted to have a revenue model in place, right from day one," says Kedia. Now their monthly operating cost is Rs 5 lakh and the company claims that it made Rs 50 lakh in sales revenue last year from its 90 clients in India.

Complykaro, with 14 employees, is now focusing on its next stage of growth. It is working on a cloud-based risk management tool - to be launched in August this year - which will have all the key compliances required by organisations across all the major laws. Kedia is confident that the new tool will help the company grow by 200 per cent next year. Time to walk the talk.