We profile some of the children of industry stalwarts who have gone beyond the conventional corporate career they were pre-ordained for, to either work for the underprivileged or for a better environment.

Roshni Nadar Malhotra. AREA OF WORK: Actively involved in the activities of the Shiv Nadar Foundation, and the driving force behind its VidyaGyan schools, which offer free education to the talented poor. <em>Photo: Shekhar Ghosh</em>
E Kumar Sharma
Huzaifa Khorakiwala, 42, is the elder son of Habil Khorakiwala, Founder-Chairman and Group CEO of the Rs 6,000-crore pharma major, Wockhardt Ltd.

Kushagra Nayan Bajaj, 36, is the great grandson of industrialist-philanthropist Jamnalal Bajaj and the son of Shishir Bajaj, who heads the Rs 10,000-crore (Shishir) Bajaj Group.

Roshni Nadar Malhotra, 31, is the only daughter of Shiv Nadar, Founder-Chairman of the $6.3-billion HCL Group.

Manasi Kirloskar, 23, is the only daughter of Vikram Kirloskar, Chairman, Kirloskar Systems, with investments of Rs 15,000-crore in Toyota Kirloskar joint venture companies apart from its investments in real estate.

Veer Singh, 29, is the only son of Analjit Singh, Founder-Chairman of the Rs 10,600-crore Max India group.

What do these five young people have in common, apart from having been born with platinum spoons in their mouths? All of them have gone beyond the conventional corporate career they were pre-ordained for, to either work for the underprivileged or for a better environment. Huzaifa Khorakiwala (left) AREA OF WORK: Leads the Wockhardt Foundation, whose fl agship programme runs mobile health-care vans in 10 Indian states, taking medical facilities to the doorsteps of those living in remote regions Photo: Nishikant Gamre
Khorakiwala set up the Wockhardt Foundation in 2008, which runs mobile health-care vans in 10 Indian states. Bajaj takes time off from his corporate responsibilities to work in the villages of Maharashtra's Wardha and Rajasthan's Sikar districts. Malhotra is the driving force behind the Shiv Nadar Foundation, which runs the VidyaGyan schools for the underprivileged, and is setting up a private university. Kirloskar has been working with underprivileged children since she was 14. Veer Singh is engaged in a hospitality project which also addresses environmental concerns.

Philanthropy in India has a long history, and is frequently driven by younger members of well-off families. As the 2013 edition of the annual India Philanthropy Report by global management consulting firm Bain and Co, which surveyed 180 high net worth individuals across four Indian cities, notes: "Young donors continue to be relevant and often set their families' philanthropic vision."

But most such activity is confined to funding non-governmental organisations (NGOs) of their choice, or expanding their company's corporate social responsibility related activities. These five are among a handful who have gone much further.

Returning to India in 1996, with a management degree from Yale University in the US, Khorakiwala initially joined his father's flourishing health-care business. But he gradually realised that this was not for him and plunged full time into the foundation's work, setting up his 'hospitals-on-wheels', which, travelling to the poorest and remotest areas in the regions they have taken up, have provided free health check-ups and free medicines to 1.81 million people so far.

"I have drawn inspiration from Mohammad Yunus, after seeing the effect of his work," says Khorakiwala. The Bangladesh-based Yunus, father of modern-day  microfinance and a Nobel Peace Prize winner, returns the compliment. "I am impressed by Khorakiwala's commitment to bringing solutions to poor people's miseries," he says, in response to an emailed query from Business Today. "He is young and energetic." Khorakiwala is gung-ho about the future. "By 2020, my goal is to see the Wockhardt Foundation impact 100 million lives, and have a financial outlay of Rs 1,000 crore.

The Wockhardt Foundation usually works in financial partnerships with public sector units or private corporate houses for specific projects. It runs a fleet of 81 vans, many of which are leased or provided by sponsors and donors. It also runs 13 more vans exclusively for eye care - these have screened around 110,000 people for eye ailments, and carried out more than 16,000 cataract surgeries. Veer Singh, 29 AREA OF WORK: Building a hospitality project which also addresses environmental concerns Photo: Aditya Kapoor
Lately, it has been taking more vans under its wing - in February this year, for instance, it reached an agreement with the Tamil Nadu government to monitor and manage its health van operations. Tamil Nadu already had 416 such vans traversing the state. Again, in April, it won a contract from the Chhattisgarh government to start a school health initiative, operating 173 vans exclusively to check the health of 2.7 million schoolchildren in Raipur and Bilaspur districts, once every six months.

"Partnering with state governments is essential to our model because that alone will give us scale," says Suman Abraham, Director, Wockhardt Foundation. Though its annual outlay is currently around Rs 20 crore, this is expected to rise 10-fold by the end of the current financial year, as more partnerships with state governments are finalised. A more ambitious mobile diagnostic programme called Swasthya Jaanch is also in the offing.

Unlike Khorakiwala, Kushagra Nayan Bajaj has chosen to straddle both corporate and social responsibilities. An alumnus of Carnegie Melon University, Pittsburgh, he is, on one hand, CEO of his group's flagship company Bajaj Hindusthan, as well as Vice Chairman of the (Shishir) Bajaj group. On the other, he also heads the Kamalnayan Jamnalal Bajaj Foundation which he set up in May 2009. The foundation has a team of 180 working in Sikar and Wardha - Jamnalal Bajaj was born in the first and grew up in the second. In Wardha, Kushagra is trying to step up village development and make the entire region self-sufficient in water.  "We have had a direct impact on about 400 out of 950 villages so far," he says. "Our target by 2020 is to make water available in all the villages all through the year." 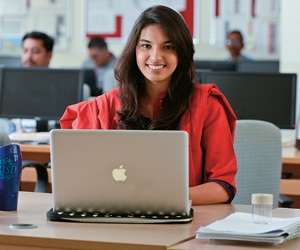 Manasi Kirloskar AREA OF WORK: Teaching art and craft to underprivileged children Photo: Nilotpal Baruah
His team first spends time with the residents of each village, getting their feedback on what is needed and ensuring their involvement before taking up projects such as building check dams, widening and de-silting rivers and streams. This makes a difference to the local economy as well. "Once you get sufficient water, you can grow three or four crops instead of one, as a result of which income levels go up and more children are sent to school," says Kushagra. So far, the foundation has spent around Rs 175 crore on the district, improving water management, encouraging bio-gas production and scientific cattle breeding.

With help from Gujarat's well-known NGO, Self Employed Women's Association (SEWA), it has also set up about 500 self-help groups in Wardha. In Sikar, it supplements similar developmental efforts by Jamnalal Kaniram Bajaj Trust, another trust also driven by the family.

So too Roshni Nadar Malhotra, who studied at the Kellogg Graduate School of Manag-ement in the US, has expanded the activities of the Shiv Nadar Foundation considerably since she took charge in 2008. "Apart from the SSN College of Engineering, which was started in 1996, all the other initiatives of the Shiv Nadar Foundation have taken flight after I returned," she says. These include the Shiv Nadar University in the National Capital Region, started in 2011 and still at a nascent stage, and two VidyaGyan schools at Bulandshahr and Sitapur, both in Uttar Pradesh.

The VidyaGyan schools, both of them residential, draw promising young students from poor rural families - annual parental income must be below Rs 1 lakh - and provide them first rate faculty and facilities, entirely free. Begun in 2009, the two schools have around 1,300 students on the rolls. "These are the poor man's Doon schools," says Malhotra. "In the next five years, we hope to see two or three children from our schools getting into the Indian Institutes of Technology and hopefully at least one into an American university." So far, most of the Rs 1,800 crore the foundation has spent on its different projects was provided by the family. "We are in the business of social investment," Malhotra adds. "We want to do only a few projects, but projects which are large and impactful." They have the liberty to take this path because family business security is common to them all. They don't face the challenge of the family business's survival: Kavil Ramachandran, ISB Professor Photo: A Prabhakar Rao
Having taken over as Executive Director of the group's holding comp-any Kirloskar Systems, Manasi Kirloskar may currently be concentr-ating on her corporate responsibilities, but she has a long history of social work. This graduate from the Rhode Island School of Design, US, taught art and craft to disadvantaged children from age 14. At 16, she organised her first exhibition of these children's paintings, raising Rs 1.5 lakh. Slowly, her involvement with the children went beyond art. "I noti-ced how the children tended to grab anything they were given, even the art material provided," she says. "I realised this was because their resou-rces were so limited, they had got into the habit of grabbing anything they could get. They had no idea of sharing or helping one another, not realising that doing so makes people stronger."

She began organising activities that taught team building and communication. Today, she believes community service should be made a part of the high school curriculum. "People should get involved when they are young, because when you start something young, it sticks to you," she adds. 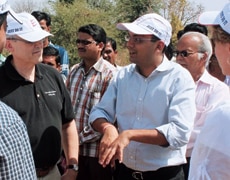 Kushagra Nayan Bajaj (2nd from right) AREA OF WORK: Village development in Maharashtra's Wardha and Rajasthan's Sikar districts
Although Vana Retreats and Hotels Pvt Ltd, the hospitality project Veer Singh is working on, is a for-profit proposition, its objectives are not entirely commercial. "The family was doing a hotel and resort project on the outskirts of Dehradun," he says. "But six months into it, I felt it should not be just another hotel but should promote wellness." A science graduate of Imperial College, London, he had long been bothered by environmental concerns, and is determined Vana should be as eco-friendly as possible. "I'm trying to map the carbon footprint of our entire project," he adds. "At the end, we will start the carbon offsetting process." To this end, for instance, his hotel will use only glass bottles, not plastic. Energy saving and waste recycling are other concerns - he wants a LEED platinum rating, a global benchmark of being environmentally sound, for the project.

While the efforts of all five are laudable, it is also true that the size and stability of their family businesses provides them a safety net. "It is an individual predilection, an inner calling that prompts them," says Kavil Ramachandran, who leads the Thomas Schmidheiny Chair of Family Business and Wealth Management at the Indian School of Business, Hyderabad. "But it is also a fact that they have the liberty to take this path because family business security is common to them all. They don't face the challenge of the family business's survival."