Next Union Budget an opportunity to get economy on track

While pre-budget meetings with the FM happen every year, industry leaders were never so anxious to put out a list of things that they wanted to see in Budget 2016.

On January 6, a group of industry captains, including Ajay Piramal, R. Seshasayee, Harshavardhan Neotia and Sunil Kanoria, met Finance Minister Arun Jaitley at North Block to apprise him of industry expectations from the upcoming Budget. While pre-budget meetings with the FM happen every year, industry leaders were never so anxious to put out a list of things that they wanted to see in Budget 2016.

The macro, consumer and investment indicators have remained subdued for the longest time and the appetite for fresh investments in the private sector has been down for several quarters. The confidence levels have also been dipping with every quarter. This was reflected in the recent Business Today-C fore Business Confidence Survey. "Sharp degree of volatility in the global markets, recent political outcome in local and Bihar elections, and the government's inability to get big-ticket reforms underway may have led to a dip in confidence levels," says Shubhada Rao, Chief Economist of Yes Bank.

The confidence levels, on a scale of 100, have dipped for the fourth consecutive quarter to 53.2 between October and December, down from 55.4 in the July-September quarter. The dip in sentiments shows that businesses are losing hope in the revival of the Indian economy. The business confidence index has been moving up and down in the past two years. It began to improve during January-March 2014, just before the general elections, and had reached 62.2 in October-December 2014. The survey was launched in the January-to-March quarter of 2011. Market research agency C fore quizzed 500 CEOs and chief financial officers across 12 cities for the survey. Similarly, other parameters, such as the overall business situation, cost of external finance, production level, order book and sales pick-up have also fallen. In the case of cost of external finance, the swing is most remarkable. In the previous survey, 66 per cent respondents had expected that the cost of finance will go down in the October-December 2015 period, whereas in the current survey, just 10 per cent foresee cost of finance to improve between January and March.

The response on cost of finance is surprising given that interest rates in India have come down considerably over the past one year. Last September, the Reserve Bank of India (RBI) had cut the repo rate by 50 basis points to 6.75 per cent, which was a 4.5-year low. Respondents were, however, gung-ho about certain other parameters such as profits pick-up and hiring pick-up. In the previous survey, 46 per cent respondents had said that the hiring situation would get worse in the October-December quarter. In comparison, just 27 per cent say that it will get worse in the January-March quarter.

Surprisingly, most respondents were not hopeful that low commodity prices and public spending will benefit the Indian economy in 2016. In the second week of 2016, Brent crude, the main international benchmark, fell to its 11-year-low of $34.26 per barrel. Some experts point out that public spending has not happened in the rural sector as much as in the urban areas. Also, road projects have seen some traction whereas other infrastructure projects need push from the government.

As a supplement to the BCI survey, we have carried out an assessment of other indicators of economic growth, which include macro-economic conditions, and consumer and investment data. In the case of macro-economic conditions, the situation has remained largely same on the exports and consumer price inflation front between April and November 2015. The IIP (Index of Industrial Production), on the other hand, showed improvement during the same period. While consumer inflation has grown marginally from 4.9 per cent to 5.4 per cent between April and November last year, IIP showed remarkable improvement - from 3 per cent to 9.8 per cent - during the same period. 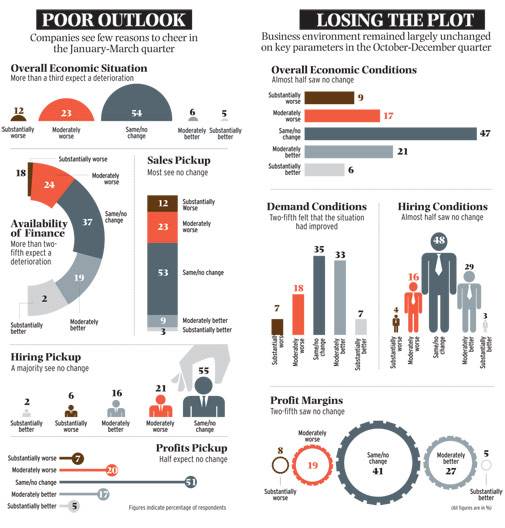 FDI inflows have registered a fall between April and September 2015. In April, for instance, FDI inflows stood at Rs 3,605 crore as compared to Rs 2,897 crore in September. Low rural demand is evident from the consumer goods industry growth numbers. In September last year, industry sales grew at around 3.8 per cent, far lower than the June numbers at 7.7 per cent.

Weak demand conditions are yet to show some improvement. The forthcoming Budget will hopefully provide some direction on how the government wants to spur demand, deliver on pre-election promises and bring the economy back on track.