India's auto market has changed rapidly in the last two years, with the share of petrol cars in total sales falling to 50 to 60 per cent from 85 per cent.

Sunny Sen
In 2007, when German car giant Volkswagen started building its India factory, at Chakan near Pune, it decided to set up a single manufacturing line that would crank out both petrol and diesel cars simultaneously.

This was a time when most other auto makers were focused on petrol models and had separate production lines for vehicles running on the two fuels. The different approach Europe's largest auto maker adopted in India is paying off well today - petrol cars now make up only 20 to 30 per cent of its sales compared with more than half two years ago. 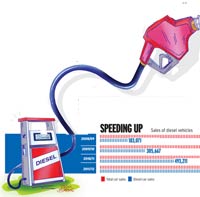 Click here to Enlarge
Volkswagen is not the only auto maker confronting this dramatic shift in consumer preference towards diesel vehicles. But the company was better prepared than most as, unlike some rivals, it did not have to make any major investment to adjust production capacity.

"The process of 'dieselisation' did not happen overnight. It was a continuous process," says Neeraj Garg, Director of passenger cars division at Volkswagen Group Sales India Pvt Ltd.

India's auto market has changed rapidly in the last two years, with the share of petrol cars in total sales falling to 50 to 60 per cent from 85 per cent. In models with both petrol and diesel options, 70 to 75 per cent of buyers are opting for the latter.

In fact, sales of diesel vehicles are rising at a fast clip even though total auto sales are muted because of a slowing economy and high interest rates. In the April to June quarter, total passenger vehicle sales rose 9.7 per cent from a year earlier to 660,634 units. On the other hand, sales of diesel vehicles surged 37 per cent to 264,250 units during the same period. 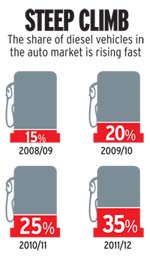 So what explains this growing desire for diesel automobiles?

The main reason: the widening gap in the prices of petrol and diesel. Since June 2010, when the government lifted its control over petrol pricing, oil marketing companies have increased the price of the fuel multiple times.

In comparison, the price of diesel has barely changed as the government continues to subsidise the fuel that it feels has a direct impact on inflation because of its wide use in transportation and irrigation. As a result, petrol is now nearly 70 per cent costlier than diesel.

And though the purchase cost of diesel models is higher, consumers do not mind shelling out the extra bucks because higher fuel efficiency of diesel vehicles makes operating expenses lower.

The changing dynamics have thrown up new challenges for the industry. While total sales are muted, the inventory of petrol cars is rising at most companies and there is not enough capacity to meet the demand for diesel vehicles.

"The industry has transformed in the past two years. Every company had to rethink its strategy," says Akshay Bhalla, Managing Director of consultancy firm Protiviti.

The process of 'dieselisation' did not happen overnight. It was a continuous process: Neeraj Garg
Click here to Enlarge
Hyundai Motor India Ltd, for instance, is importing more diesel engines from its South Korean parent to increase its diesel vehicle capacity by 50 per cent. It became essential, given that 60 per cent of Hyundai's i20 hatchbacks and close to 80 per cent of the popular Verna sedans sold in India are diesel variants. But importing diesel engines alone was not sufficient to meet the demand. So in April, after nearly two years of deliberations, the company decided to invest Rs 500 crore to set up a diesel engine factory in Chennai.

"This is a sudden shift. No one anticipated the price differential (between petrol and diesel) to go up so soon," says Arvind Saxena, Director, Sales and Marketing, Hyundai Motor India. "For a manufacturer it is difficult to cope with the change."

For Skoda, a Volkswagen group company which has been in India for nearly a decade, managing the shift was easier because of the synergy it derives from its parent. "We were able to react to the diesel demand quickly and managed the inventory pretty fast," says Sudhir Rao, Managing Director, Skoda Auto India Pvt Ltd. Skoda makes the Fabia hatchback and Rapid sedan at the Chakan plant where Volkswagen produces the Polo and Vento models.

The diesel variant comprises more than 80 per cent of the sales of Rapid, which is built on the Vento platform. US auto giant Ford, too, has focused on building its diesel capacity in India. It invested $12 million in increasing its annual manufacturing capacity from 260,000 to 340,000 cars, with the entire incremental capacity coming in diesel, says Michael Boneham, President and Managing Director, Ford India Pvt Ltd. Boneham had initially expected petrol cars to make up 60 per cent of Ford's sales in India, but the share is only 30 per cent now. "It is important not to make all the bets at the same time," he says.

Industry leader Maruti Suzuki is gearing up as well. The company has a huge portfolio of diesel cars, and more than half the sales of its popular Swift and Dzire models come from the diesel variants. It has been facing capacity constraints with the waiting period of its diesel cars ranging from three to six months, and recently announced an investment of Rs 2,600 crore to boost capacity. But the company's biggest problem is that it has only one type of diesel engine - the 1.3-litre engine it sources from Fiat - which Maruti uses in its Swift and Ritz hatchbacks, Dzire and SX4 sedans, and in multi-utility vehicle Ertiga. Moreover, Maruti does not have a single diesel variant in the entry-level hatchback segment. 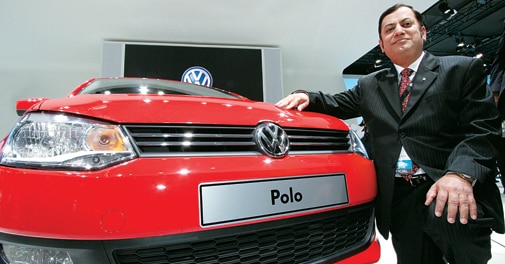 The process of 'dieselisation' did not happen overnight. It was a continuous process: Neeraj Garg
The lack of a portfolio of diesel vehicles has hit Honda Siel Cars India Ltd the hardest. The local unit of Japan's Honda Motor Company dominated the mid-size sedan segment for several years with its top-selling Honda City model, but sales of the model dwindled as customers preferred Hyundai's Verna or Volkswagen's Vento, both of which offer diesel variants. In an interaction with BT on the sidelines of an event, Hironori Kanayama, President and CEO, Honda Siel, said the company did need diesel cars and that it was working on the problem. He declined to specify the company's strategy, but various news reports have suggested that Honda will launch a diesel car by the middle of next year.

A few companies gained too. Mahindra & Mahindra, for instance. India's top sport utility vehicle maker offers only one product with both petrol and diesel variants, the Verito sedan. Its largest-selling SUVs Scorpio and XUV500 run only on diesel. For the April to June period, M&M's sales jumped 32 per cent from a year earlier to 58,615 vehicles.

Will demand for diesel vehicles continue to outpace that for petroldriven cars? Not necessarily. What might change the market is a proposed tax on diesel vehicles. The industry is opposing the tax that it says will make the vehicles more expensive and choke demand. Though the government unexpectedly refrained from introducing the levy in its Budget in March this year, the option is still on the table.

Another school of thought says diesel will always remain cheaper than petrol because of subsidies and its impact on agriculture. "As long as the price gap continues demand for diesel vehicles will only increase," says Abdul Majeed, partner at PricewaterhouseCoopers India. Protiviti's Bhalla points out that, if the demand trend continues, auto makers will struggle to fully utilise their installed manufacturing capacity of petrol cars. "Companies will have to look at ways of exporting petrol vehicles," he says.

One way of reviving demand for petrol vehicles is to increase their fuel efficiency, and some companies are already working in this direction, says Lowell C. Paddock, President and Managing Director, General Motors India Pvt Ltd.

Volkswagen's Garg says some companies have renewed their focus on the retail chain and are creating awareness about the affordability of petrol cars. But companies will have to balance their manufacturing operations, he says. Still, in emerging economies such as India, no one can be sure about a long-term business plan, he adds.